In the great book of rock n' roll there are few tales stranger than that of Vincent Furnier, the mild-mannered son of a preacher man who transformed into the parent-baiting, mascara-wearing, doll-hacking arch villain known as Alice Cooper. For around 45 years Cooper has been filling the worlds theaters, arenas and stadiums with his pioneering grand guignol style theatrics and showmanship, recording some of the greatest tracks in rock history along the way. But what of the man behind the mask and the emotional and physical toll of turning oneself into a living breathing nightmare? The unfortunately monikered new documentary 'Super Duper Alice Cooper' intends to give us some answers.

This is not the first attempt to tell Alice's story on screen: 1991's 'Prime Cuts' interspersed concert footage, TV performances and music videos with interviews with Cooper and his collaborators. It suffered uneven results however, with many of the more interesting eras of his career glossed over or skipped through at a breakneck pace in order to focus on the well remembered hits. For this fresh take then, less focus is placed on the music and more on the man himself and his personal redemption. We are presented with a Jekyll and Hyde tale - literally, with footage of Lon Chaney's silent classic spliced in as an astute framing device. While lots of rare and unseen Cooper footage is featured throughout (including the legendary Hollywood Bowl concert and some great candid film of Alice working with Bernie Taupin on the confessional 'From The Inside' album), much of the tale is filled out with animated photos and collages. This seems to be a growing trend in documentaries - similar methods were notably used to great effect in 'American', the Bill Hicks doc. While it works well narratively here, newcomers or casual fans may find themselves bored by the prospect of sometimes looking at what is essentially a slideshow for several minutes at a time. 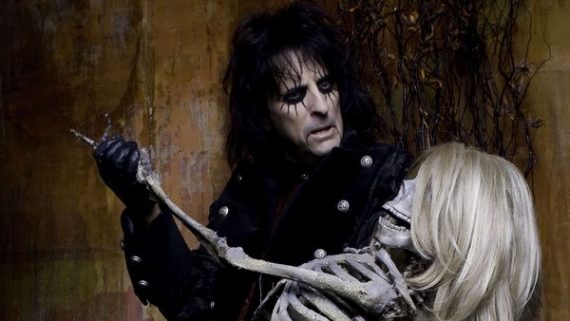 Narration is provided by Alice himself, original bandmates Neal Smith and Dennis Dunaway (as any old school rocker worth his salt will tell you, Alice Cooper was the name of the band before it became the name of the individual), ingenious manager Shep Gordon and invaluable wunderkind producer Bob Ezrin, who honed the Alice sound from messy drawn-out psychedelia to taut powerful rock. John Lydon, Elton John and Iggy Pop also feature, though these brief contributions feel like something of an after thought. We follow through the high school years, the band's formation, discovery by Frank Zappa, move to Warner Brothers and subsequent global fame. It's clear that the documentary aims to place Alice in his rightful context as an original who has never been given full credit for his huge influence on much of what has followed. After all, the band were delivering theatrical spectacle, dadaist imagery and gender-bending back when eternal critical darling David Bowie was still trying to be Bob Dylan, though succeeding only in being a third rate Donovan and putting out dreck like 'The Laughing Gnome'. Perhaps not coincidentally, according to Bowie associates he and his bandmates attended an early Cooper show and were awestruck - though one suspects he'd be loathe to admit it himself. Either way, from KISS to Twisted Sister and Marilyn Manson, the debt owed by Alice's legion of descendants and imitators should not be ignored.

The breakup of the original group is covered with more candor than in previous retrospectives, however it's here that we run into what is without question the film's biggest sin of omission. Michael Bruce, lead guitarist of the original band and therefore the writer of its most memorable riffs: 'I'm Eighteen', 'Under My Wheels', 'No More Mr Nice Guy' and so on, not only doesn't appear (possibly through choice - of all Cooper's former colleagues his seems to be the frostiest relationship) but unforgivably, neither the man or his contribution are mentioned once. Some may claim that this is immaterial since the film is chiefly concerned with Alice/Vince, but as a fan it's impossible to see the lack of even a passing mention to Bruce as anything other than petty, cruel and vindictive. 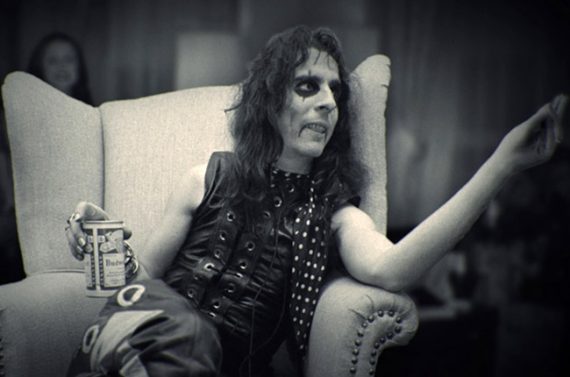 That aside there is much to enjoy here. While stories such as the notorious 1969 chicken incident have been told ad nauseam, there are some surprising and moving revelations particularly concerning the early 80s. Myth making has always been a part of Alice's persona on and offstage and it must be said that he has never let the truth get in the way of a good story, so to hear him finally come clean about a long-rumored and long-denied cocaine addiction (though he has always admitted to battling alcoholism) in that period stands out as the film's key moment. Around that time Alice was at a low ebb, his marriage having collapsed while his popularity and health had declined greatly as he put out a clutch of truly bizarre new wave inspired albums including 'Flush The Fashion' and 'Special Forces'. His appearance at this time was even stranger - often referred to by fans as his 'mad housewife' phase. Finally knowing just how close to death he was lends the interview footage of this time an eerie air, while providing a satisfying emotional arc as the film closes with footage of a newly clean and sober Alice embarking on his 1986 'The Nightmare Returns' comeback tour.

As a primer for new fans, a tribute for devotees and as a film on its own, 'Super Duper Alice Cooper' is a flawed but fascinating, well made doc with much to recommend, and is certainly an improvement on 'Prime Cuts'. When the time comes for Alice, still currently putting on great performances night after night at the age of 66, to finally hang up his snake and guillotine the music world will be an immeasurably less exciting place. Any efforts to preserve the man, the music and the legend therefore are not just welcome, but essential.