The Blood Falls: A Horror Movie and an Astrobiological Wet-Dream

Scientists on an expedition in the Austrian Alps, stumble across a stunningly horrific scene in the glacial mountain tops.  Dubbed Blood Glacier, a font of putrid blood-like liquid oozes from the wall of ice, flowing into the lower lands like a gruesome expanding pool of exsanguination.  Initial study of this bizarre feature of the Alps reveals that this glacial blood is having a dangerous effect on local wildlife, the repercussions of which remain unclear.

Did that pull you in?  Is it a believable scenario?  Screenwriter Benjamin Hessler and director Marvin Kren thought so, at least they thought it was plausible enough for a feature length movie in 2013.  The above is essentially a plot summary from the movie, titled – aptly enough – Blood Glacier.

It’s an Austrian film production originally titled Blutgletscher.  You’ve probably never heard of it, unless you’re into foreign indie horror films, but those who’ve seen it liken it to John Carpenter’s The Thing (1982), and are most charitable with their reviews.  It’s a movie though, and in that genre – eco-horror with genetic mutation and zombie type undertones – it doesn’t really compete well in the already flooded marketplace.

It does have one advantage though…it’s based on a true story.  Sort of. 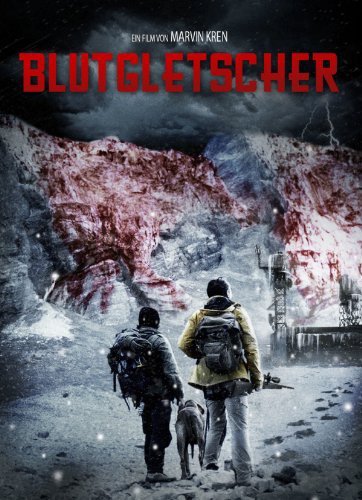 No, there are no mutant animals or zombies roaming the Austrian Alps (that we know of).

There is a grain of truth to the plot of the movie, however…the blood glacier does exist.

It’s actually called Blood Falls though, and it’s a feature of the Taylor Glacier on the Victoria Land plateau of Antarctica.  The glacier itself is approximately 54 kilometers long, but Blood Falls is located on what’s called the glacier’s tongue.  And, well…it bleeds.

As you can see from the pictures, the red stained ice and rock offers some gruesome looking landscape, and those who are somewhat squeamish might want to avoid travelling there.  It was found in 1911, during the British Antarctic Expedition 1910-1913 (also known as the Terra Nova Expedition), which included the English-Australian geologist T. Griffith Taylor, after whom the entire glacier valley is named.  The find is credited to Taylor, as his description of the strange feature is still used today.

Upon discovery, and following what was sure to be some head scratching, it was decided that the thick red water was caused by a type of algae.  A relatively well known phenomenon, even at the time, that is responsible for red tides, lakes of different colour and even (possibly) red rain all around the world.  That explanation stood until the mid-1960’s when the University of Wisconsin’s Professor of geology, Robert Black, discovered that the red colour is actually caused by a combination of iron salts and ferrous oxide being squeezed out of the ice.

You may be thinking that this is all very interesting, but who really cares about a bit of red ice on the only remaining unpopulated continent on the planet?  Well, as it turns out, there’s another part of the movie that isn’t really made up.

There aren’t any zombies, but there are some pretty neat little creatures associated with the Blood Falls.

The Taylor Glacier is unique, in that it’s frozen to the ground beneath it.  Most other glaciers on Earth are what’s called wet-based glaciers, meaning that they simply sit on the ground, scraping the Earth’s surface as they move and retreat with freeze-thaw cycles.  The Taylor Glacier – as well as the other glaciers in the McMurdo Dry Valley – is called a cold-based Glacier, and such cold-based glaciers offer some very interesting features.

Taylor Glacier hides, and basically seals off, an ancient freshwater lake, called a subglacial pool.  That pool was sealed off by the icecap more than 1.5 million years ago, and when that door was closed a time capsule of life was created. 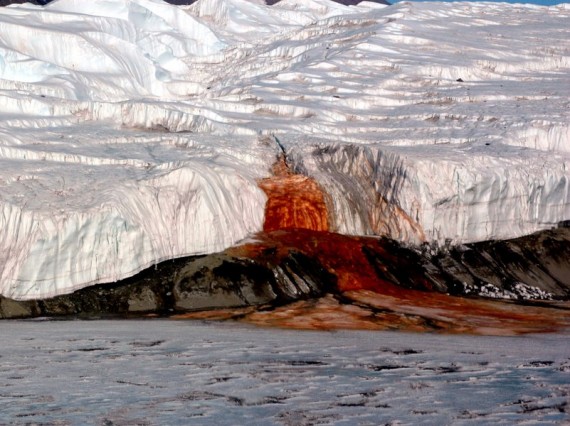 That may sound familiar, as the news has been thick the last two years with reports on Lake Vostok, the largest subglacial lake in Antarctica.  These hidden and isolated worlds offer much to study, but typically such scientific work is arduous.  In order to reach the biosphere contained at Lake Vostok, researchers have had to drill long boreholes into the ice, some to a depth of 4000 meters, and they risk catastrophic contamination of the biosphere that they want to study each time they breach the ice.

At Blood Falls however, they don’t have that problem.  The process that causes the glacier to turn red actually helps to provide a means for studying the subglacial lake without any drilling.

The microbial life that is trapped under the glacier (and within it) has evolved to metabolize sulfates and ferric irons instead of oxygen and organic nutrients, which is a physiology that is quite different than most other life on Earth.  These extremophiles, which exist in one of the most extreme environments on this planet, have adapted to survive in those conditions, and the oozing red ice sludge is actually full of them.  They’re being brought to the surface and expelled into the oxygen rich environment outside of the ice by the melting process, to their ruin, unfortunately.  Researchers have identified 17 different species of microbial organism at Blood Falls, creatures that exist nowhere else on Earth.  And the reason these creatures can’t survive outside of the icy environment from whence they came, is the same reason the ice turns red: oxygen.

Even though we, mammals, can’t survive without it, it’s difficult to deny how harmful oxygen can be.  Most life on Earth has adapted to use it, or depend on it, actually.  But the fact that there is life, here on Earth, that not only doesn’t need it, but also can’t tolerate it, means that the odds for life existing and evolving elsewhere in the solar system, or galaxy, or universe, just went way up.

The conditions found in the environment under glaciers are, as mentioned, quite extreme.  At least compared to life on the surface.  It isn’t all that different than the conditions on, say, Saturn’s largest moon Titan, however.  This drastic dichotomy between environments gives astrobiologists an excellent opportunity to study how life adapts to such environments, all in an attempt to understand what could possibly be waiting for us beneath the surface of other frozen worlds.

So, the next time you hear someone say that horror movies are all made up BS, remind them that Blood Glacier is one pointed exception to that rule.

Why Artificial Intelligence Might Not Destroy Us After All