"The damnedest story is the one about the thing one of our Rangers killed up there on a ridge near the reservation in Arizona." Stanley sat across from me, leaning in and sipping his coffee. "David, the guy who told me about it, says it was a Bigfoot."

It was late February, 2013, and I was sitting in a cafe near Fort McDowell, Arizona. Stanley, a member of the Navajo Rangers, had been explaining strange phenomena to me that he and his fellow officers had observed over the years. A polite man in his mid forties, Stanley was most interested in aerial phenomenon, and this had been the primary purpose of our discussion. But when he told me he had a photograph of a dead Bigfoot on his cell phone, my curiosity had naturally shifted toward discussion of the mystery beast.

"Can I see the photo?" I asked him, to which he agreed.

The photograph Stanley showed me was about all he had, aside from the allegation purportedly given by "David," his associate, that the creature displayed in the image was a Bigfoot that had been killed. Stanley shrugged his shoulders with a chuckle as he showed me the photograph, admittedly a bit skeptical--or baffled might be a better word--about what the image actually contained. 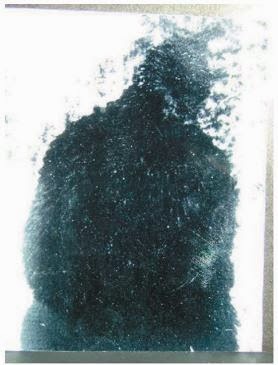 "Who really knows," he said. "He's keeping it all very hush hush for now."

Looking back on the incident, I feel confident that Stanley hadn't been dishonest in the least. As a Navajo Ranger, his merit and integrity were always apparent, as well as the passion, and perhaps caution, he applied to his interest in the subject of UFOs. But had the image he showed me really been of a Bigfoot?

This part of the story remains unclear, although it may not be entirely unprovable. One thing I do know now, however, is that the image hadn't been taken just prior to my meeting with Stanley in Fort McDowel, nor had it been taken by "David," the likely source of the deception in this instance.

The photo in question (pictured at the top of this article), recently also appeared at the exhaustive Bigfoot Evidence website, where it is described thusly:

"The story that this photo tells us is that in 1894 in the wilds of western Canada some trappers and mountain men encountered a bigfoot and shot him. It may have happened near their cabin. They took a photograph of it. But there is more: the photo had some writing on the back of it, maybe in the hand of Lyle Billett. The back of the photo bore this text:

Year 1894Yalikom River Around Lilliott B.C.
Forestry- Hudsonbay Co.
They took the picture and the Guy that was in the picture went & stole them back from the forestry records (hudsonbay co.) I believe his last name was Holiday (Don't know the first name)
Never took all the pictures (only one) and took pictures of the rest."

I recall feeling, at the time Stanley had shown this very photograph on his cellular phone, that the animal in the image looked more like a wild cat, possibly a mountain lion, than anything ape-like. Of course, displaying the image on his mobile phone (which I recall had not been a smartphone variety) presented distinct limitations in terms of what we could discern at the time about the details of the photo. Still, the shape of the creature in the image, as well as the grain of the old photo stock, are unmistakable: This had been "David's" Dead Bigfoot.

Aside from the unusual circumstances that led me to be shown the image for the first time, there is still the question of what the photo may actually show, and whether or not anything more about its origins can be determined. My feeling is that this is, as stated previously, more likely to simply be a Mountain Lion or some other known species that had been photographed following a hunt, but if Mysterious Universe readers have any further information, we would love to hear more from you about it.

Female Tarantulas Cannibalize Mates Because They Can