Trained Pilots Are Still Mixed About the Valentich Disappearance

Among the most curious cases of a missing person ever to be reported, the disappearance of 20-year-old Frederick Valentich on October 21, 1978 has continued to haunt aviation experts and UFO researchers alike.

Valentich, as government documents pertaining to the investigation have shown, had been something of a UFO enthusiast at the time of his death. As he flew over the Bass Strait on the night of his disappearance, he had been in contact with air traffic control at Melbourne, and described a greenish illuminated object that was accompanying him as he flew, occasionally racing away, circling him, and performing other curious maneuvers.

According to officials with Australia's Department of Transport, one theory had been that, "Valentich became disorientated and saw his own lights reflected in the water, or lights from a nearby island, while flying upside down," as reported in the October 23 edition of the Toledo Blade. However, is this a plausible explanation for what may have happened? 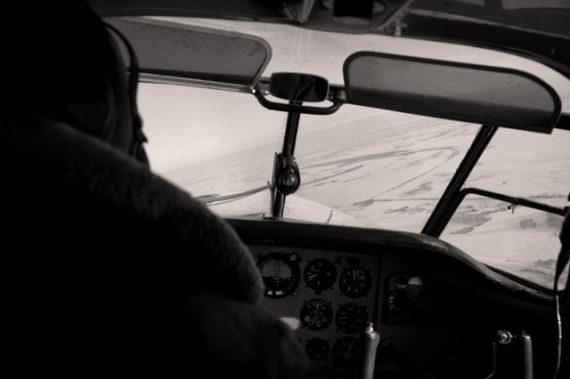 Yes, and no, according to pilots weighing in on the matter. In response to discussion of the Valentich case on a recent edition of The Gralien Report Podcast, several opinions were sent along by pilots who chose to weigh in on the matter, resulting in a number of different opinions regarding the likelihood of the "upside down" hypothesis.

Two of the responses were quite thorough, and hence I present them here for consideration. The first arrives from a friend of mine, Bill, who after serving time as a pilot and with the U.S. Navy, offered these thoughts:

As a pilot, I must disagree. The reason they have gyroscopic instruments in the cockpit (not only a gyro-compass, but a Turn & Bank Indicator and Artificial Horizon) is because the human apparatus can be easily confused. When John (John-John) Kennedy flew his Cessna into Long Island Sound, he didn't know he was in a steep turn, and thinking he was flying straight and level, he basically flew into the water. There are numerous cases of pilots being in physical attitudes drastically different from what they think. The problem is that the pilot thinks he's flying one way, and he rationalizes that attitude. Part of the training for an Instrument Rating, which training I have taken and which Rating I have earned, is to let the instructor fly the plane while the pilot is not paying attention to what the instructor is doing. The plane is put into an "unusual attitude" and control returned to the pilot with the instruction that he is to recover the plane. It's amazing what the mind tells the pilot is going on as opposed to what is actually happening. The pilot, then, has to refer to the instruments to determine the plane's attitude, airspeed, altitude, etc., and take appropriate steps to return the plane to straight and level flight. While such an exercise never leaves the plane inverted, but I was surprised to read reports of student pilots or licensed pilots training for instrument ratings would actually turn the plane upside down in an effort to return to normal flight. Their mistake, in every instance, was interpreting the instrumentation incorrectly.

My flight examiner (the guy who tested my proficiency and issued my pilot's license) had a unique skill. He would change the plane's attitude, airspeed and power setting so subtly that I did not realize what was happening. Once he gave control of the plane back to me with the nose low (thus accelerating), the power setting low (thus descending), and in a 45 degree bank to the left. The first thing I saw was the low airspeed (if the speed gets too slow, the wings stop flying and the plane drops), but I realized that it was accelerating. So instead of adding power to "recover", I left the power alone, leveled the wings and raised the nose. Voila! (The examiner was suitably impressed).

What you might wish to do is to take a few hours of flight training with a Certified Flight Instructor (CFI) and ask him to demonstrate recovery from unusual attitudes. You will see, right away, how much the human mind can misinterpret from physical discernment. Have fun, and realize that the Instructor will not let you kill him, and thus you are in no danger.

Offering an alternative viewpoint, Ian, a flight instructor, shared his feelings that the "upside down hypothesis" seemed unlikely:

I am a flight instructor with Training Squadron 28.  Part of our flight syllabus includes a short period of inverted flight either as a demonstration of what inverted flight feels like, doing aerobatics, or as part of unusual attitude recovery training.  If you are inverted due to aerobatics (or unusual attitudes) you have done some sort of severe multiple G pulling maneuver to get into that.  I'm not 100% sure his type of aircraft but I am pretty sure that it is not aerobatically rated and would rip the wings off.  Otherwise, if you just roll inverted you know it.  You hang uncomfortably in your seat held only in place by your harness.  It is not a comfortable feeling.  Even if you have severe vertigo (a debilitating mental situation that causes you to lose all sense of up and down) you would still probably figure out you were inverted quickly.  We had a case a few years back where as student and instructor got into an inverted spin and had to bail out.  They emergency opened the canopy (these aircraft are not ejection seat capable) and unfastened their harness and before they could dive our on their own, fell out of the aircraft and cleared it safely.  My point of that is even doing a high speed inverted spinning dive, gravity still pulled them out faster.  They were well aware that they were upside down.

It is possible that he got into a death spiral; a situation where the pilot (usually not instrument rated or experienced) gets into a slow descending spiral into the ground (the JFK jr. crash is an example of this).  Valentich had a class-4 instrument rating-I don't know the equivalent here in the states but if the conditions were conducive to him crashing in this manner I think the Australian government would have brought this up.  Plus it would have been very clear on radar as he would have been seen losing altitude and in a turn.

One again a skeptic puts out a theory about something they know nothing about.

It is interesting to hear from qualified individuals on the matter, as new evidence, or at least new interpretation as presented here, may help us learn new things about old cases. And yet, the mystery of Valentich's disappearance remains just that: mysterious, if not baffling altogether. What really could have contributed to so much confusion, both on part of the young pilot in training the night he went missing, as well as the scores of researchers who have sought to understand the cause behind his disappearance?

Is This Pennsylvania Woman the Virgin Mary’s Cousin?