From September 14-25, 1952, the North Atlantic Treaty Organization (NATO) coordinated a huge military exercise in the North Sea and North Atlantic. Titled Mainbrace, the exercise utilized the armed forces of the UK, the United States, Norway, Canada, Denmark, France, the Netherlands, and Belgium. No less than 85,000 military personnel took part in the operation, the purpose of which was to demonstrate to the former Soviet Union that NATO was fully prepared to withstand, and counter, any possible Soviet attack on western Europe.

Barely one day into the exercise, at least two reports of UFO encounters were filed with authorities by naval personnel on board ships in the Atlantic, between Ireland and Iceland. The first such encounter involved a "blue/green triangle," which was observed flying over the sea at a speed estimated to be around 1,500 mph. Later that same day, three unidentified objects, travelling at around the same speed, were seen flying in a triangular formation. All three craft reportedly emitted a "white light exhaust."

As part of the British Royal Air Force's involvement in Mainbrace, 269 Squadron - which was based at RAF Ballykelly, Ireland - was posted to RAF Topcliffe, Yorkshire, England. It was at Topcliffe, on September 19, 1952, that one of the most historically important UFO sightings was reported by serving members of the RAF. A September 20, 1952 document written and signed by Flight Lieutenant Dolphin of RAF Topcliffe - and sent to Headquarters, No. 18 Group - states: "In accordance with your instructions, herewith  a report on the unidentified object which was seen over the station earlier today."

The report referred to by Dolphin was prepared by one of the main witnesses, Flight Lieutenant John Kilburn, who revealed the following:

"Sir, I have the honour to report the following incident which I witnessed on Friday, 19th September, 1952. I was standing with four other aircrew personnel of No. 269 Squadron watching a Meteor fighter gradually descending. The Meteor was at approximately 5000 feet and approaching from the east. [Flight Officer R.N.] Paris suddenly noticed a white object in the sky at a height between ten and twenty thousand feet some five miles astern of the Meteor." 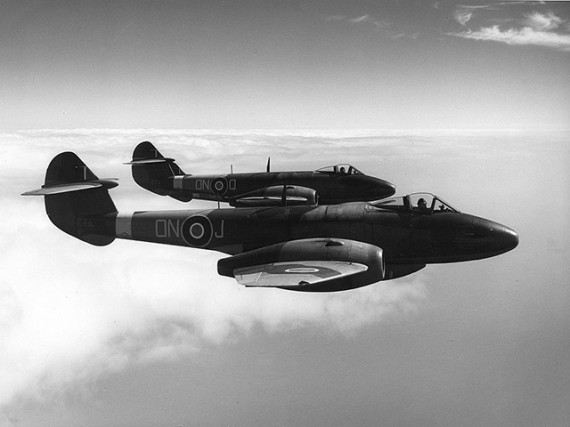 Kilburn continued: "The object was silver in colour and circular in shape, it appeared to be travelling at a much slower speed than the Meteor but was on a similar course. It maintained the slow forward speed for a few seconds before commencing to descend, swinging in a pendular motion during descent similar to a falling sycamore leaf...After a few seconds, the object stopped its pendulous motion and its descent and began to rotate about its own axis."

Then, Kilburn noted, something amazing happened: "Suddenly it accelerated at an incredible speed towards the west turning onto a south-easterly heading before disappearing. All this occurred in a matter of fifteen to twenty seconds. The movements of the object were not identifiable with anything I have seen in the air and the rate of acceleration was unbelievable."

As well as the documentation filed by Kilburn (which was supported by the testimony of five of his colleagues), a number of reports from members of the public reached RAF Topcliffe too, all of which were received by Group Captain J.A.C. Stratton and forwarded to the Air Ministry at Whitehall, London for scrutiny.

It was while securing the pictures that Litwin sighted a circular, silver object maneuvering above the American fleet. Litwin, who was shooting with color film, managed to obtain three photos of the UFO. Significantly, all the photos had the Roosevelt in shot - something that gave the pictures depth of field and assisted in determining the size of the UFO, which, according to Litwin's report, was considerable. 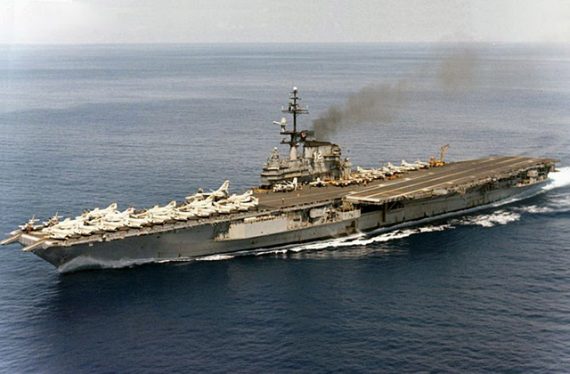 Twenty-four hours later, a similar object was seen over the North Sea. Again, it was silver in color and circular in shape. On that occasion, an interception was attempted by a number of RAF fighter aircraft engaged in the exercise. The UFO easily outdistanced itself from the planes.

Then there is the testimony of William Maguire, formerly of the RAF. During Mainbrace he was  posted to RAF Sandwich, Kent, England where something seriously strange was going down. In Maguire's own words...

“My memory was that everything was in a complete flap. Normally, in a military situation everything is ordered, regular and set out. But here was a situation that was plainly out of control. Mechanics were flying about all over the place.”

As Maguire got his bearings, and the situation was revealed to him in its starkest form, the reasons behind the blind panic became staggeringly clear: a huge, unidentified aerial object was being tracked on the radar-scopes high over the English Channel: “The mechanics were being blamed for not calibrating the instruments properly; we were being blamed for not interpreting the readings correctly. Every single instrument on the base was showing this enormous object sitting up at an unbelievable height. It was the size of a warship and it just stood there.”

Now we move on to the world of the CIA: as part of their monitoring of foreign press agencies, the CIA obtained a copy of a Norwegian newspaper clipping concerning an incident that had occurred on September 18. Published in a Harstad, Norway newspaper, a CIA translation of the article reads as follows:

"On 18 September, at 1400 hours, three forestry workers who were working right outside Kirknes, noticed a flat, round object hovering motionless at about 500 meters altitude. The object appeared to have a diameter of 15-20 meters. After the workers had observed the object for a while, it suddenly flew away at great speed in a northwesterly direction. It appears that only these workers saw the object; they swear, however, that their report is true."

It must be said that the characteristics displayed by the UFO were very similar to those described at RAF Topcliffe just one day later.

And we're still not done with Mainbrace. In his book The Report on Unidentified Flying Objects, Edward J. Ruppelt - former head of the U.S. Air Force's Project Blue Book - revealed that a British Royal Air Force intelligence officer, on an exchange visit to the Pentagon, admitted it was the Mainbrace sightings that led the British Government to officially recognize the UFO.

Curiously, Ruppelt also stated in his book that prior to the commencement of the NATO exercise, it had been suggested by someone in the Pentagon that Naval Intelligence should "keep an eye open for UFOs" during Mainbrace.

Why someone might have had advance notice that UFOs were likely to turn up during Mainbrace remains a mystery to this day. Unless, of course, NATO knows better...