Presuming you’ve read the headline, you’re probably thinking I was sniffing model airplane glue when I came up with the idea for this post. Well, maybe I was, and that’s none of your business, but there is evidence, to back up this crazy claim thanks to golden artifacts left behind by the Quimbaya Civilization circa 1000 CE.

The Quimbaya prospered in along the Cuaca River in what is now Quindío, Caldas and Risaralda, Colombia, beginning some time around the 6th and 7th centuries. Among their claims to fame in the history books is their impressive artistic talents using the medium of a gold and copper alloy called tumbaga.

While numerous artifacts have been recovered from the Quimbaya civilization, there are a few specific pieces that stand out. Those few pieces bear a striking resemblance to modern airplanes, which is probably why they are commonly referred to as the Quimbaya Airplanes — if you can imagine that.

The airplanes are small, perhaps the size of the average ornament on a Christmas tree, if you’re into that kind of thing, but many believe the design contains aerodynamic properties conducive to actual flight.

The artifacts are often cited by ancient astronauts proponents as evidence supporting their beliefs. It’s not a bad artifact to cite when trying to prove that argument either.

In the 1990s a scale replica of a Quimbaya airplane was built to the size of the average radio controlled airplane, equipped with an engine, and then flown without difficulty.

I believe this video should earn this post bonus points because it includes some commentary by Giorgio A. Tsoukalos of the History Channel’s show Ancient Aliens.

Of course, most mainstream history and science people say this is all just wishful thinking on the part of ancient astronaut theorists, because there is no way people had the knowledge or technology to construct viable aircraft more than 1000 years ago. The gold airplane is more than likely an homage to an insect, bird, or even just creative expression that happens to look like an aircraft.

Watching the modern, engine-powered model fly, given a few slight modifications, is impressive though. It’s design did allow it get off the ground, and stay there, which is something that isn’t easy to do. Modern civilization has only been doing that consistently for about 100 years.

So if the Quimbaya civilization made aerodynamically sound model airplanes some time between the 6th and 10th century, they had to have been the first to do something like this right?

In the era just before the Quimbaya Civilization the Peruvian Nazcan culture created the Nazcan Lines, drawings of birds, lizards, and other animals so large, they are best viewed from the air. 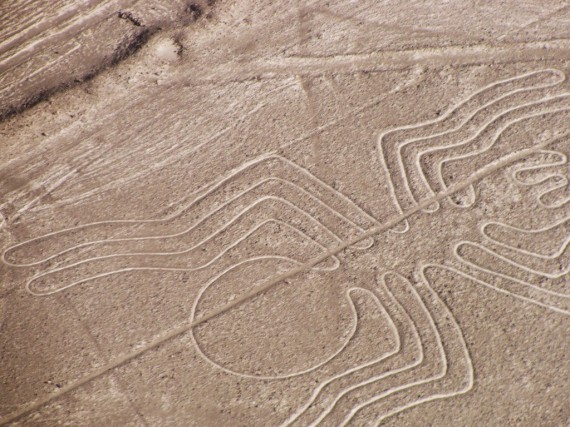 The desert drawings are so large and intricate, some believe they couldn’t have been created without some kind of assistance from an aerial view. Although there are those who say the full drawings can be viewed from a specific location atop some nearby hills. Whether air-help was needed to make them or not, why go to all the trouble of making drawings in the sand if not to be seen by somebody?

There are several theories about this, including reasons of astronomy and religion, but there is evidence going even further back of possible manned flight.

In the Egyptian Temple of Seti I, built some time around 1280 BCE, there are hieroglyphs depicting what appears to be a helicopter, and this just in, helicopters fly. There are also other objects in the drawings resembling flying objects one might see in a Jetsons cartoon.

Then there is the story of Mauryan Emperor Asoka the Great, who allegedly created a secret order of Nine Unknown Men to guard the technological secrets known to the Mauryans to prevent enemies from acquiring their power. Among the technology the Nine Unknown Men were ordered to protect was flight and space travel. This one has been chalked up as myth by most, but who knows what truth existed at one point to be perpetuated and exaggerated into the modern myth?

There is of course another explanation for the existence of the Quimbaya Airplanes. Some theorize the design could be modeled after an aircraft which was seen in the sky, or possibly even visited them from another planet.

The Quimbaya Civilization mysteriously vanished some time around the 10th century. The common theory is they splintered into smaller groups and scattered throughout South America forming new cultures, independent of the each other in both religion and politics.

When you look at the Quimbaya legacy, specifically the airplanes, you have to wonder whether the civilization’s disappearance can be attributed to them being the first group to all lace up their sneakers and zoom out to the heavens to catch a ride on the Hale-Bopp Comet, or other celestial body that happened by one day.

One thing is certain, Quimbaya artists put together some nice pieces that are far better than anything I’ve ever done. Their model airplanes, or bugs, or whatever, don’t have crooked pieces, scrunched up decals, or dried glue coating all the little parts making up the intricate detail like mine always do. So if nothing else, they deserve credit for that.

Way Out of Place Aquatic Beasts