It's fair to say that fame came late for Danny Trejo. Director, Tarantino collaborator and grindhouse devotee Robert Rodriguez was quick to see the star potential of the former San Quentin inmate, casting him in a small role in 1995's 'Desperado' (the second film in his acclaimed 'Mexican Trilogy'. Trejo would also feature in the 'Spy Kids' movies, 'Heat' and 'Con-Air', but it was not until 2010 when Rodriguez cast him in the titular role of 'Machete' that Trejo would finally be recognized as a cult hero at the age of 65.

Of his decision to cast Trejo in the leading role, Rodriguez explained "When I first met Danny, I said this guy should be like the Mexican Jean-Claude Van Damme or Charles Bronson, putting out a movie every year and his name should be Machete." With the success of 'Machete', last year's sequel 'Machete Kills' and the prospect of a third installment to take the series to new levels of joyously preposterous excess; 'Machete Kills Again...In Space!', that destiny - along with Danny Trejo's inspiring journey from convict to movie star - has been fulfilled. While he has arguably been typecast - despite jokey cameos in family-friendly fare, his name is now synonymous with over-the-top genre flicks - at 69 years old Trejo is in greater demand than ever, appearing in a dizzying array of low-budget and straight to DVD fare while Robert Rodriguez busies himself with other projects. Predictably, despite various levels of Trejo's involvement and go-for-broke acting, these are a mixed bag varying from the painfully dull to the surprisingly great. 'Dead In Tombstone', I'm happy to say, lands squarely in the latter category. 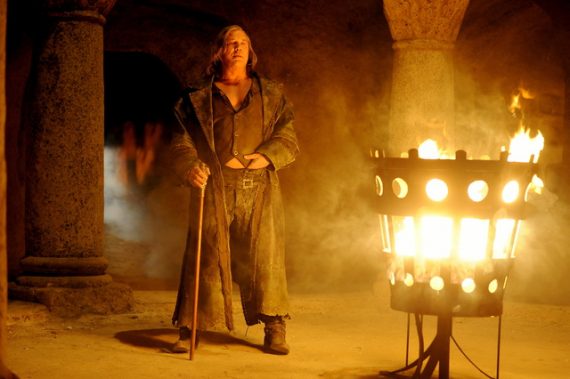 Billing itself as an action-horror-western, the film has all the classic elements of the revenge film with an enjoyable otherworldly twist. In fact, both in its metaphysical aspects and its story structure, 'Dead In Tombstone' has much in common with another franchise that I've been reviewing lately, 'The Crow' (the final film in the series 'Wicked Prayer' in particular, which I'll be getting to soon). Anthony Michael Hall plays the condemned Red Cavanaugh, an outlaw whose hanging is interrupted by the arrival of the Blackwater Gang, headed by Red's half-brother Guerrero De La Cruz (Trejo). Having despatched of the local law enforcement, the gang formulate a plan for a last big score, after which they will be set for life. This involves robbing a bank in the nearby town of Edendale, which currently houses a vast supply of gold due to a dispute over ownership. The operation begins smoothly enough, but at the pivotal moment Red turns on Guerrero, shooting him and informing the rest of the gang of his plans to take over the town. A cowardly lot, the rest of the Blackwater gang quickly hails to their new chief and aid in finishing off Guerrero in a hail of bullets.

Sent to Hell, Guerrero is confronted by Lucifer himself (Mickey Rourke at his scenery-chewing best) and realizes he faces a future or torture and torment. It is in the grandest of old storytelling traditions then, that Guerrero offers the devil a wager - 24 hours back on Earth in order to bring the six souls of the remaining Blackwater gang members to him in exchange for his own life. 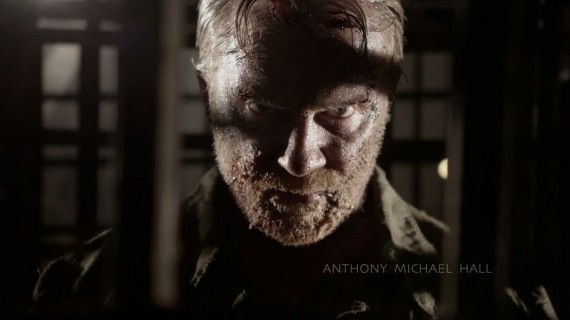 From there on the story follows the usual beats, there's the requisite "You can't be you" style speeches and the addition of Calathea Massey (Dina Meyer of the 'Saw' films) as another victim of the gang eager for retribution. It's true that the plot is unoriginal and even the devil aspect is well-trodden territory, but if you're looking for pure entertainment the only question that should remain is does 'Dead In Tombstone' deliver the goods in style? The answer is a resounding yes, with solid acting, surprisingly good production values and cinematography that raises the game to a point that I'm truly surprised that the movie didn't merit a theatrical release. I'd go as far as to say that this is every bit as enjoyable as the Trejo/Rodriguez collaborations, and shares their retro, guts and glory aesthetic. If you're a 'Machete' fan awaiting your next fix or a lover of old school action thrills, don't miss 'Dead In Tombstone'.

How We’re Killing the Bees