In January 2008, I gave a lecture on my cryptozoological research for the Texas-based Denton Area Paranormal Society, DAPS, organized and run by a man named Lance Oliver. The lecture went very well, and during the course of the evening Lance casually mentioned to me that he had undertaken investigations of a couple of local stories, legends and incidents of a monstrous nature that he felt might very well be of keen interest to me.

I quickly replied: “Well, tell me more!” And so, that is precisely what Lance did.

It transpired that Lance had spent a great deal of time digging deeply into the legend of a diabolical beast that became known as the Denton Goat-Man; he had also uncovered reports of a Bigfoot-like creature seen roaming the thick, hilly woods of Ray Roberts Lake – a huge body of water situated just a short drive from Denton itself.

Well, as Denton was barely an hour’s drive from where I was living at the time (White Rock Lake, Dallas, Texas), I suggested to Lance that we head out to both of the locations in question and, at the very earliest opportunity, do a bit of scouting around. He heartily agreed with me and a date was firmly set: February 6.

The investigation started much like any other for me. I loaded my back-pack with a digital camera, camcorder, audio-recorder, pen and pad, bottles of juice, chips and chocolate, and a couple of punk-rock CDs for the journey, and headed out to our pre-arranged meeting place: an ice-cream shop just off of Dallas’s I-35. After a hearty banana-split lunch, we set off in search of our first quarry: the Goat-Man.

That Denton had a Goat-Man legend was of particular interest to me. In my Memoirs of a Monster Hunter book I detailed my summer 2005 expedition to Lake Worth, Texas – with friend and fellow-monster-hunter Ken Gerhard – in search of its very own Goat-Man, a menacing man-beast, to be sure.

Not only that: White Rock Lake, Dallas, where I lived at the time, was also said to be the lair of such a creature, too. So, with a third Goat-Man now said to be lurking only a relatively short drive away, I knew this was an affair that I could not afford to ignore. 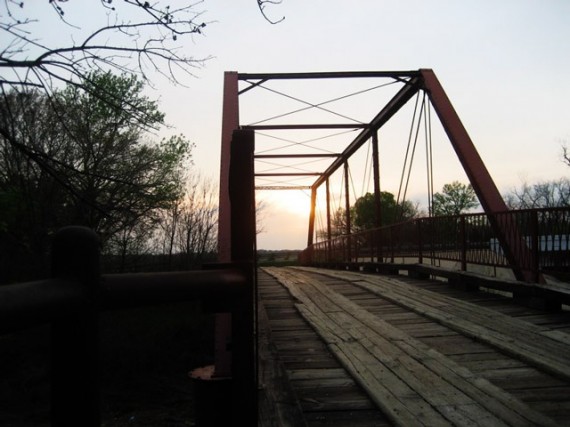 The sightings of the fiendish Goat-Man of Denton had all occurred in the immediate vicinity of an 1884-vintage steel and wood structure known as the Old Alton Bridge – which, as its name strongly suggests, had been replaced by a new bridge that sits alongside it. I have to say, however, that although the new version, constructed in 2001, was undoubtedly both sturdier and stronger than the original its bland, concrete frame was far less appealing to the eye. But it was the Goat-Man, and not the local architecture, I was chiefly interested in.

As we arrived at the site and got out of our respective cars, Lance proceeded to tell me the stories behind the legend. One tale suggested that, decades ago, occultists in the area had been recklessly dabbling in matters of a distinctly negative nature and had inadvertently opened up a doorway or portal that provided the hell-spawned horned and hoofed nightmarish beast access to our world – which was not a good thing at all, Lance commented.

A far stranger, but visually comic, tale suggested that the legend of the Denton Goat-Man was based on the story of a local resident who, many years ago, killed his parents and was summarily sentenced to death by hanging for his crime.

At the moment he was hung, or so the tall-tale went at least, the man’s head was torn from his neck by the weight of his body and his ghostly frame returned from the grave looking for a new set of eyes, teeth and ears, and a nose of course – which it duly found by viciously tearing off the head of a very unfortunate goat that most definitely happened to be in the wrong place at the wrong time.

Precisely how the corpse was able to seek out a new head for itself without the benefit of eyes was left unsaid, however. Lance told me that whichever story was the truth – and frankly, if I had to make a choice I could only go with version one – it was an undisputed fact that very strange and unsettling things were afoot at the old bridge.

We walked its short length and made our way through the tall trees that surrounded it, while Lance informed me of some of the stranger things that he and a number of his colleagues in the local paranormal field had experienced there. That occult and paranormal activity was afoot at the bridge was not a matter of any doubt at all.

Lance had a personal awareness that people had been out there, late at night, with Ouija boards; there were stories of satanic cult activity; and sightings of unusual phenomena – such as eerie, localized mists, and floating balls of light, better known in the ghost-hunting community as “orbs” – were strikingly commonplace.

Lance also told me, intriguingly, how on one occasion while he was walking the bridge he announced loudly that he did not believe in the existence of the Goat-Man. Then as if from nowhere, but certainly right on time, came the eerie ringing of an invisible bell. Lance, realizing there was not another earthly soul around, wisely elected to reassess his stance on the matter of the Goat-Man’s reality or otherwise.

For forty-five minutes or so, we walked the trail, crossed the bridge back and forth, and took countless photographs of the area. Although the Goat-Man seemingly did not deem us worthy of a viewing, Lance had one final comment to make on the matter that I found very intriguing. He informed me that he had also uncovered evidence of satanic worship at White Rock Lake, also the home of a Goat-Man, as I noted earlier in this article.

All of this collectively serves to reinforce my beliefs that, when it comes to Cryptozoology, we are very often dealing with beasts born on a plane of existence acutely different to that of ours, and not merely flesh and blood animals presently unknown to science and zoology...