Turning the Tables on Your Typical Exorcism

It’s a scene we’re all familiar with. A young child lies in a bed, surrounded by the frantic faces of loved ones, who glance panic-stricken at each other and occasionally utter expressions of alarm. They try to make sense of what’s happening in front of them, but all of their life experiences have clearly not prepared them for this inexplicably horrific situation. Little Johnny, we’ll call him, is undoubtedly sick, but this is no ordinary illness. He thrashes in bed, makes vulgar noises, won’t respond to medication, and for all intents and purposes just doesn’t seem like himself. In extreme cases, we hear that he has showed an uncanny and unnatural strength, knocking several well-intentioned family members across the room or to the ground. Rumors of levitation, mind-reading, and even telekinesis, the ability to move objects with the mind, abound. Perhaps most alarmingly, little Johnny begins speaking in tongues, or barking out phrases in a strange language. One of the older relatives recognizes it as Latin, but no one can explain how Johnny knows it, or why his voice seems to be much deeper and uglier than normal.

In the Hollywood version of the above scenario, the next steps are clear. Someone phones the local priest, and explains that Johnny has seen several doctors and gone through all traditional routes to determine that there is no mental illness or physical malady to be treated here. Instead, it is time for spiritual assistance.

It is time, no doubt, for an exorcism. 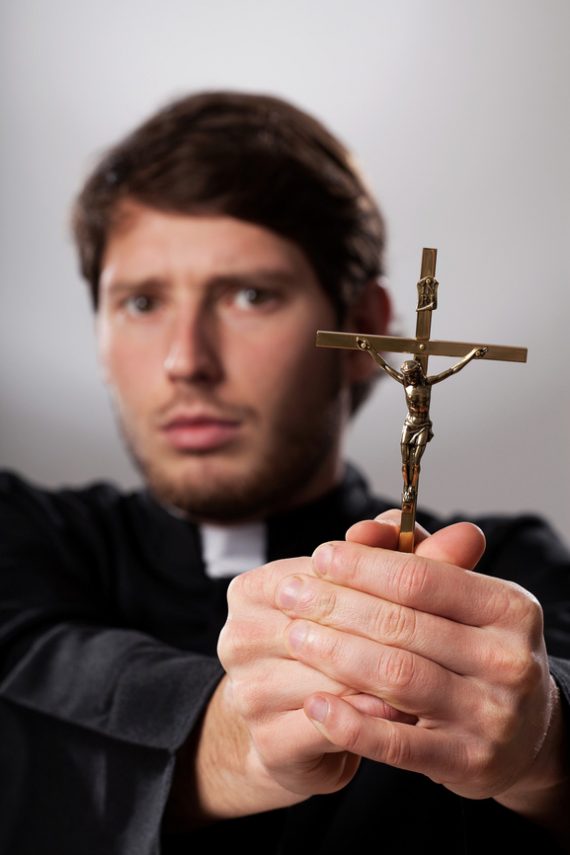 Without fail, there is a shortage of priests equipped to handle exorcisms in the local area. Words of caution arise about the heavy-duty spiritual battle that must take place if indeed an exorcism is performed.

Invariably, the grizzled priest in our story is convinced that yes, once again, his services must be used. He crosses himself, gathers the holy water and other relics, says a few prayers, and gathers his trusty protégé (usually a younger, skeptical priest who comes along for support, but doesn’t really believe in all this stuff. Boy, is he ever in for a surprise). They pile into the black sedan, type the address of poor John and his family into the GPS, and set out on their way. Very few words are spoken on the grim car ride over. The grizzled, veteran priest knows he’s got another fight on his hands in the battle of good vs. evil. The protégé holds his tongue, but can’t resist the occasional smirk here and there. What a bunch of hocus pocus, he thinks.

But let’s add a little twist to the Hollywood story right about here. The priest and his apprentice pull up to the home, and purposefully stride up to the front door, preparing for the worst. As he’s about to knock, the veteran priest notices something a bit unusual; hammered in the door frame, at a bit of an angle, is something that makes it stands out from the other houses. A closer look shows that it appears to be a miniature scroll-like device, with small Hebrew lettering engraved on it. 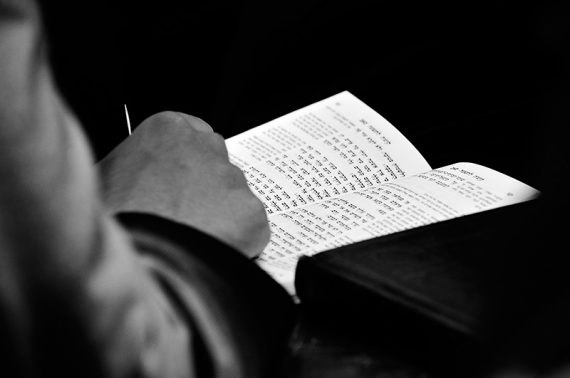 Shrugging off the initial confusion about this decorative item, he knocks. A few moments later, the door swings open and there stands a friendly-faced, bespectacled man. Not much stands out about his appearance, aside from the kipa, or yarmulke, resting on the back of his slightly-balding head.

“Mazel Tov!” He exclaims, smiling and extending his hand for the priests to shake. “I’m Bernie Cohen. We’re so glad you’re here!” He hurries them inside.

This is a first for the frazzled priest. He’s dealt with all types of demons before. But what in God’s name is he supposed to do for a possessed child who happens to be Jewish?

While the above scenario can be written off as simply a comedic spoof on the general made-for-Hollywood version of the exorcism, it does raise some interesting questions about the entire ordeal. And as someone who was raised in the Jewish faith (though who does not practice today), this question did tend to cross my mind every time I saw another version of the traditional exorcism on screen.

What, exactly, is someone who does not fit into the traditional Christian views of the church supposed to do if and when that person finds themselves in a similar situation? And what does this tell us, or not tell us, about the overall idea of “possession” itself? 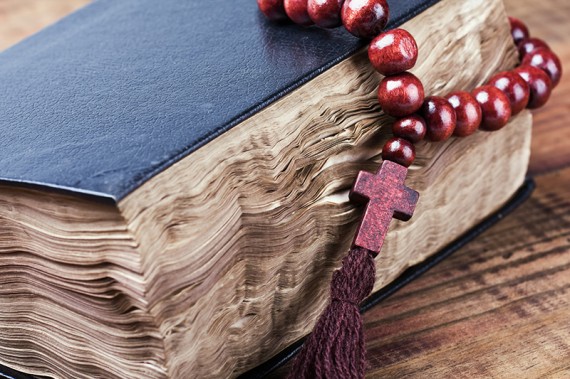 So, I called a Rabbi. Rabbi Mark Glickman is a Seattle-area author and leader of the Kol Ami Congregation, in Woodinville, Washington. His first book, entitled “Sacred Treasure: The Cairo Genizah, The Amazing Discoveries of Forgotten Jewish History in an Egyptian Synagogue Attic,” deals with the discovery of ancient scripts which shed a whole new light on Arab-Jewish relations in medieval times. No stranger to subjects of spiritual topics from a Jewish perspective, I asked Mark what a typical approach might be for someone in his congregation who might be suffering from something that looked like a “possession.”

“First off, I would be very skeptical that there wasn’t something else going on,” he said. Fair enough.

But then I asked Glickman why he felt Hollywood and other storytellers seemed to focus solely on ideas of demonology and possession from a Christian-based viewpoint. He pointed to some of the differences between the faiths in what specifically is emphasized, as well as how the more recent sects of Judaism tend to be less focused on the “superstition” of more esoteric ideals. Those topics are found in the Kabbalah, the Jewish hidden knowledge which deals more with spiritual questions, but as Judaism split off into less traditional sects, less emphasis was placed on those teachings in everyday life, he said.

Claiming no expertise, Rabbi Glickman also suggested that the Druidic influence on early Christianity could be one reason that the ideas of demonology and other non-physical ideals may have stuck. This differed from the Jewish ideals of preparing for the Messiah in the here and now, which led to cultural and political aims and a departure from the non-material.

“Jews, especially Reform Jews, are far more focused on this lifetime, and put an emphasis on the physical world,” he said. “Yes, there is the idea of a divine will, but for the most part there is emphasis on how to live in this world, and the political and material realms. When Christianity came along, it dealt more with matters of the spirit.” 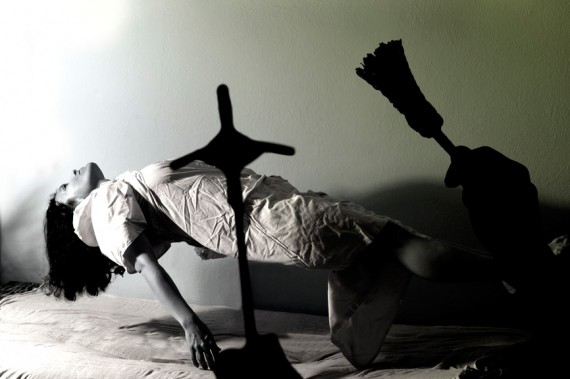 That said, Jews are no strangers to the paranormal. Just ask the owners of the infamous Dybbuk Box, a wine cabinet said to be housing a particularly nasty spirit, which some say may have even played a role in the Holocaust.  And, despite public perception, Jews also have their own forms of exorcism – which are referenced in the Dead Sea Scrolls and involve a group of rabbis who have mastered Kabbalah using the Shofar, or Ram’s Horn, to drive out evil forces.

So, while it would probably be a lot less awkward than the above scenario with the Catholic priests, it does appear that there is a method in place for a Jewish person who happens to find themselves possessed.  The intention would be the same, though the prayers and focus on Christ as the savior would obviously differ.

But how do these differences in approaches shed any light on what is actually happening in these cases to begin with?  If they aren’t completely written off, as many leaders of any faiths are likely to do (and with good reason), we’re still stuck with the question of who are these so-called “demons,” where do they come from, and what do they want. Does one’s faith, or lack-thereof, give us any clues into the overall nature of these cases in the first place, assuming they aren’t hoaxes?

If, in at least some cases, these demons are in fact real, why should a person appealing to Jesus Christ work in the case of a Catholic, but not for a non-believer? Does this say anything about the legitimacy of one faith vs. another, or is this just another example of religion being used as a control system and a way to divide us against each other, in this case by the actual entities or “demons” themselves? Are these simply trickster entities, as suggested by John Keel and others, playing on the fears handed down via these respective religions? Or are they just a reflection of our own fears, superstitions and beliefs, which simply disappear once our own beliefs in these systems themselves also vanish but haunt us until then? And how does this all play into the near death, and (presumably) actual death experiences, which seem to vary from culture to culture, and from faith to faith?

I’m looking forward to the next Hollywood film that explains all that.