Greetings, fellow Coppertops! Get ready to be propelled out of your seats, for an adventure inside the Fortean Matrix full of mystery & wonder: From paleontological & archeological discoveries in the New World, to rumors of extraterrestrial anointments in the Old one; and as we pay our respects to the artist responsible for our childhood nightmares, we'll celebrate the silver anniversary of one of the most fascinating stories in UFO mythology. So sit back & relax while I gently impale your cerebral cortex --don't worry, I promise to use plenty of lube! 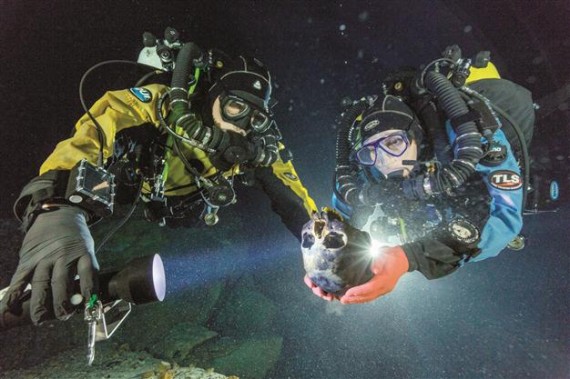 We start our mission with a little dive down to a dark & sacred place: A limestone sinkhole in the Yucatán peninsula, the likes of which were called <i>cenotes</i> by the ancient Mayas & revered by them as entrances to the Underworld. In this particular cenote, cave divers found in 2007 the skeletal remains of a 12,000-year-old teenage girl --named Naia by her discoverers, which is a Greek name meaning "water nymph".

Naia is in such a perfect state of preservation due to the low-oxygen conditions of the cave, she represents not only the oldest & most intact human fossil found in the Americas so far, but her sad ending at the bottom of the cave, where she presumably broker her neck & pelvis after falling down, might finally help us answer one of the most intriguing questions in Anthropology: Where did the first Americans come from? Did they all descend from settlers who crossed the Bering strait, or did they migrate from Asia at several stages in their evolution?

The newly discovered skeleton—named Naia by the divers who discovered her, after the Greek for water—should help to settle this speculation. Though her skull is shaped like those of other early Americans, she shares a DNA sequence with some modern Native Americans. In other words, she’s likely a genetic great-aunt to indigenous people currently found in the Americas.

The analysis of Naia's teeth showed her mitochondrial DNA (mtDNA) contains a haplotype that is indigenous to America, and which scientists believe to have evolved in Beringia --the land bridge once connecting Asia to America.

“We were able to identify her genetic lineage with high certainty," says Ripan Malhi, a professor of anthropology at the University of Illinois. Malhi’s lab was one of three that analyzed Naia’s mtDNA; all three analyses yielded the same results. "This shows that living Native Americans and these ancient remains of the girl we analyzed all came from the same source population during the initial peopling of the Americas."

Naia proves that migrations from Beringia made it to southern Mexico. As for why Naia’s skull is so different from modern Native Americans, co- author Deborah Bolnick, assistant professor of anthropology at the University of Texas at Austin has an explanation: “The physical differences between Paleoamericans and Native Americans today are more likely due to changes that occurred in Beringia and the Americas over the last 9,000 years.” Bolnick’s lab was one of the three to confirm the mtDNA findings.

Not that I want to dispute these scientists' findings, but IMO all these studies are woefully incomplete if we don't take into account the 'fringier' findings of American anthropology. What about Kennewick Man, who seems to show morphological similarities to the Ainu population in Japan? And let's not even go to the issue of giants skeletons & the Smithsonian cover-up...

Speaking of giants, last night I went to see the latest remake of Godzilla, which despite its plot inconsistencies will still manage to please the hardcore Kaiju fans, IMO. One of the best moments in the film is when you finally get to see the legendary King of All Monsters in all its ginormous glory --and when it delivers its signature roar? Massive geekgasm, vatos!

Sure, 160-foot high reptiles is a matter of fantasy  --but with over 165 million years to tinker with, Mother Nature managed to get pretty creative when it comes to the size of the terrible lizards. Just take a look at the new species of sauropod recently discovered in Argentina, which is calculated to have been as heavy as 14 adult elephants & reaching a towering 20m (65 ft) in height, equivalent to a 7-storey building! This makes it the biggest dinosaur ever discovered, even bigger than the previous record-owner Argentinosaurus --Yes, Argentinians are that arrogant.

It seems this new species hasn't been named yet. May I suggest Humongosaurus? (And if they ever find a bigger dino, then the logical name for that one would be Yougottabekiddingmesaurus).

My Brother, the Alien 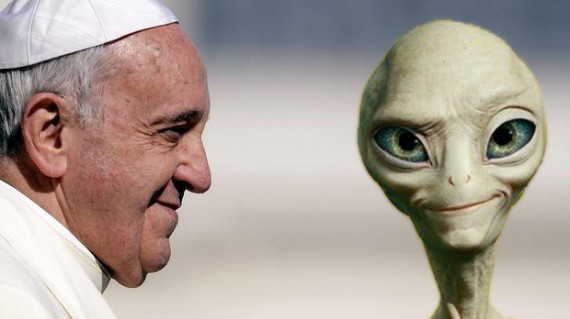 Then again, the Argentinians have plenty of reasons to be proud of themselves. Their country produces great food, great wine, great music --Soda Stereo was arguably the best Rock group in all Latin America; here's a little taste of their genius-- and also great pontiffs, as we've come to witness since last year.

In his latest public statement, Francis managed to capture the world's attention once again, when he mentioned he wouldn't object to baptizing a Martian should it ask him to; this of course was just a metaphor intended to express the new sense of tolerance & openness he's trying to instill into the Catholic church, yet in light of similar comments made in the past by Vatican's chief astronomer José Gabriel Funes, as well as Vatican astronomer Guy Consolmagno, it kinda makes you wonder if His Holiness has already been made privy to some secret document hidden deep inside Saint Peter's vaults...

During the early morning Mass he holds every day at Casa Santa Martha, his modest residence within the Vatican, the Argentine pontiff said: “If tomorrow, for example, an expedition of Martians arrives, and some of them came to us, here ... Martians, right? Green, with the long noses and big ears, just like children paint them...and one says, 'But I want to be baptized!' What would happen ?"

The answer, he said, was that the Church should not “close the doors” to anyone and the Martians should be embraced as equals.

Long noses & long ears? Methinks the Pope was perhaps thinking of the Guemes gnomes instead of Martians! Then again, what would happen if the aliens came to baptize US??

So Long, Father of the Xenomorph 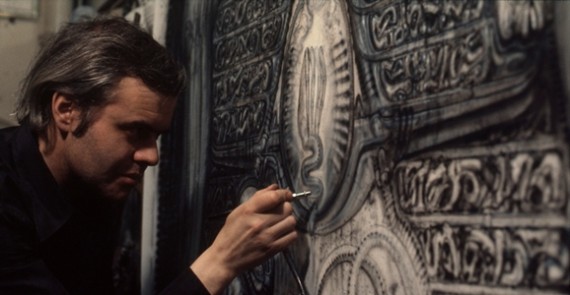 Although chances are that if the aliens stopped by for a visit, they'd probably just want to give us a big hug --and then use us as surrogate incubators.

This last week was marked by the sorrow passing of H.R. Giger (1940-2014), one of the most famous & influential artists of the XXth century, not because of art galleries or curators favoring his artwork, but because of the exposure he managed to achieve through cinema, by birthing the phallic-headed space spawn in Ridley Scott's masterpiece of Horror & Sci-Fi: Alien, the 8th Passenger.

Over at The Daily Grail, Greg wrote a wonderful obit for the Necronomicreator, including an excerpt from Nevill Drury's book The History of Magic in the Modern Age:

...Giger has litte real explanation for [his] exotic images. "I try to come close to my imagination", he says in broken English. "I have something in my head and I try to work it out - like a kind of exorcism". Giger recognises the adverse effect his work has on many of the people who see it, but he is keen to point out that if his work seems dark, this is not necessarily the way he is himself. "My childhood was very happy", he says, almost apologetically, "and my parents have been very nice to me". He ponders a while and then adds, "I think that most of the images in my paintings are evil, but you can't say that I'm evil. It's just that evil is much, much more interesting than Paradise..."

I personally find the idea of the artistic process as a type of exorcism particularly interesting, and aligned with my own personal ideas that artists are more conduits than creators.

Let us finish this Red Pill with have seems to be Mother Nature's appropriate homage for this incomparable artist: I give you the Alien catfish. 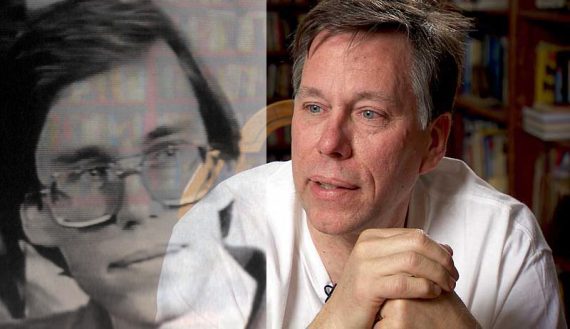 Scott's Alien taps deeply from the Lovecraftian fear of the unknown, and how there might be things lurking deep down in the vowels of space for which Humanity may not be ready to deal with.

But first we need to find a way to get out in space, right? Chemical rockets just don't cut it, and ion thrust is only attractive if you're not in any particular rush to get to your destination. No, what we need is some 'out there' cutting-edge, radical technology. How 'bout a gravity-bending drive fueled by a fusion reactor? Now we're talking, boy-o!

That's the kind of 'magical' science currently in possession of the most secretive branches of the United States government; that is, *ïf* we are to believe in the testimony of one Robert Lazar, who almost single-handedly embedded Area 51 into our collective unconscious. And if you've never heard of Lazar, then clearly you've not been paying attention to the UFO scene in the last 25 years.

Useful patsy, unaware disinformant, brilliant liar or cosmic whistle-blower? We each reach our own conclusions when it comes to Lazar's story --at the Daily Grail I offer an in-depth overview of the things we've learned of him & his story since 1989.

I think the only thing I can say for certain, is that Lazar's account had the right mix of elements of mystery & plausibility to make it a classic in the annals of the UFO mythos --and given the example of Roswell & other vintage cases, I predict it will stay the same for at least another 25 years.

Until next time, this is RPJ jacking out; hoping you reach that fabled 'island of stability' between Fact & Fantasy.

Newly-Discovered Dinosaur May Be the Largest Land Animal in History