The Mysterious Skeleton Lake of the Himalayas

Some historical mysteries have lain forgotten for centuries by man, buried by the sands, or snow, of time. Be it the remoteness of the location or the danger involved in reaching it, for whatever reason, these places have kept their mysteries to themselves over the ages, hidden in their dark corners of the world from the outside as time marches on around them. It is often pure accident that saves these historical oddities from eternal obscurity and dredges them into the light for us to finally take a look at

One such place lies high in the Himalaya Mountains of the Uttarakhand state of India; a small glacial lake called Roopkund. The lake is located in a remote area of craggy glaciers, rocky chasms, and snow blanketed mountains, at an altitude of 5,209 meters (16,499 feet).

Other than the stark remoteness of the barren, windswept locale, there is not much that is immediately peculiar or special about this lake. It is small, at only 2 meters deep, and typically remains completely frozen over throughout most of the year. One could typically go trekking past this lake and hardly even know it was there. Yet for one month a year, when the snow melts and the ice thaws, it becomes apparent why the lake has gained its other namesake “Skeleton Lake,” for one can peer into the clear water and find hundreds of skeletons peering back.

The ancient skeletons, which are over 1,200 years old and in varying stages of preservation, can be found scattered around the landscape and lurking at the bottom of the lake, visible through the frigid, crystal clear water. It is truly a haunting sight to hike among the majestic peaks and find oneself among this bleak grave of a lake and its numerous skeletons strewn about, like some open air, forgotten tomb.

Although whispered about in rumors from as early as the 19th century, the official discovery of this gruesome, skeleton filled lake in the middle of nowhere was made by chance in 1942 by a British game reserve ranger, who stumbled across it while conducting a survey. During that summer, the ranger came across the thawed lake and went to investigate it, only to make the horrifying discovery of over two hundred human skeletons lying at the bottom, floating through the water, and strewn about haphazardly among the rocky shores.

The puzzling discovery of a skeleton filled lake nestled away in the Himalayas far from any human settlement immediately captured the public’s imagination. People scrambled to come up with theories as to how all of these enigmatic skeletal remains had ended up in such a cold, remote place and as to what their identities were.

One of the earliest ideas put forward was that the skeletons were the remains of missing Japanese soldiers from World War II who had died from the harsh conditions while trying to sneak across that route through the mountains. This theory was later discounted by an expedition sent by a British government spooked at the idea of a possible land invasion, as the bones were determined to be too old to date from that period, and had merely been well preserved by the frigid cold. Even so, it was still uncertain just exactly how old the bones were.

Another idea was that the skeletons were the lost remains of the doomed Kashmir warrior Zogawar Singh and his army, who had mysteriously disappeared without a trace while returning from Tibet. Still other theories suggested that it had been groups of religious zealots killed in some sort of ritual group suicide, the result of a battle, or groups of travelers who had succumbed to landslides, avalanches, or disease. 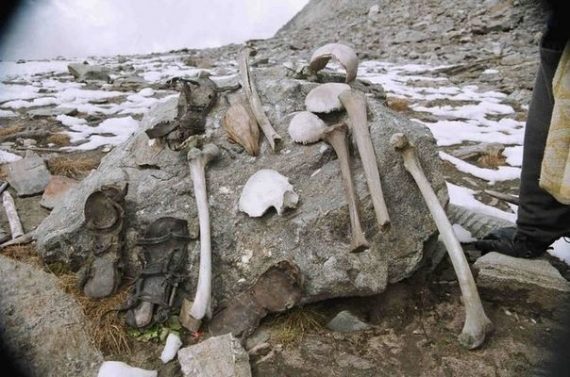 For decades, the skeleton lake of Roopkund baffled scientists and no one was able to shed any light on just what exactly had happened at this far flung icy lake. Many studies of the lake were conducted over the years, including one carried out by the Anthropological Survey of India in the 1950s, yet more questions remained than answers.

It wasn’t until 2004 that a major expedition was mounted by National Geographic to try and discover more through thorough DNA testing and scientific investigation. The investigation found that the skeletons, around three hundred of them in total, all dated to around 850 AD, suggesting they had all been from the same group and had all died at the same time. After death, the freezing water and dry, icy conditions had kept the bodies in a state of remarkable preservation for the next 1,200 years. Some grisly remains unearthed in the frozen ground were surprisingly well preserved. These bodies amazingly still had hair, flesh, jewelry, and leather clothing that were shockingly intact.

Furthermore, DNA testing determined that there were two distinct groups represented among the bones, one group of taller people who were all related, and another separate group of shorter local people who are speculated to have been porters or guides. Examination of personal belongings and artifacts at the scene also seemed to suggest that these people had all been on some sort of pilgrimage.

In addition, the expedition found that the skulls all exhibited evidence of similar blunt trauma to the head, which showed that these mysterious people had met a rather violent demise. Closer forensic analysis of the skull fractures revealed that the injuries were caused by some sort of heavy, rounded object. Adding to this mystery was the fact that all of the remains only showed such traumatic injuries to the head and shoulders and nowhere else, as if they had been struck suddenly and violently from above.

These brutal findings all seemed to support some of the earlier theories of death by landslide or weapon, but after compiling all of the data and information they had gathered, researchers came to a rather bizarre conclusion as to how these people had died. It was theorized that the only way so many people could have died so suddenly from such similar injuries at the same time was that they had been caught in the open during a freak hailstorm of immense hailstones that came down with such ferocity that all three hundred pilgrims were pummeled to death.

It was estimated by scientists that in order to cause the injuries observed in the skulls, the hail would have have been around the size of cricket balls, or around 9 inches in diameter. Some have disagreed with these findings, but the scientists have claimed that this is the only plausible, rational explanation given the observable evidence.

In recent years, Roopkund, once so shrouded in mystery, has become rather well-known and is a fairly popular destination for trekkers, who brave a five day ascending trek to reach the icy lake and its grim denizens. Many of these people are thrill seekers there specifically to see the mysterious skeletons, looking for a peak at the macabre.

It is said by officials that the increasing number of these trekkers is threatening the integrity of the site as a good number of the skeletons have gone missing, and it is believed that this is the result of curious people taking them home as grisly souvenirs. Authorities have a difficult time policing and preserving the site from such thefts due to the inaccessibility of the lake.

Looking at the skeletons lost in this inhospitable landscape it is easy to find oneself imagining just what happened here all of those centuries ago. What were these people really doing so deep in the mountains all that time ago? Where were they headed? Did they really die of giant hail or is there a chance something else occurred?

If the bones keep getting plucked away at the current rate it seems the mystery of the high altitude frozen lake of Roopkund, which has lasted tucked away here in the mountains for over a thousand years, may very well disappear with them forever.