The Mysterious Suicide Forest of Japan

There are some places on this Earth that just seem to be cursed. For whatever reason, these insidious locations are infused with an almost palpable evil that pervades the landscape and creeps into the mind. Among these forsaken habitats of menace, we can find some that hide amongst some of the world’s most gorgeous landscapes; places of coiled evil waiting to pounce whilst shrouded in natural beauty.

At the foot of Japan’s iconic Mt. Fuji, lying sprawled amongst some of the most majestic scenery in Japan, is one such place. At the base of this picturesque mountain lies the haunted destination of broken souls known as Aokigahara, often referred to as the “Sea of Trees” and more infamously as the demon infested “Suicide Forest.”

Aokigahara Forest lies at the northwest base of Mt. Fuji, which looms overhead with its majestic peak.  It is a starkly beautiful landscape renowned for its breathtaking scenery and vistas. The forest itself is approximately 35 square km (14 square miles) in area and from a distance seems like an idyllic, pristine wilderness area. However, looks can be deceiving.

The moment one steps into Aokigahara, it quickly becomes apparent that something is slightly off about the place. The first thing one may notice is the disconcerting silence here. The density of of the closely packed trees blocks the sun and wind, producing a dark, eerie blanket of quiet, which is further compounded by the curious lack of wildlife in the area.  The sounds of birds and other wildlife that one might expect to hear chirping and chattering in abundance are oddly absent or subdued, as if they have shunned this place or are hiding from something. Some have described the quality of sounds here as somewhat muted, as if being heard through a thick veil or from another room. 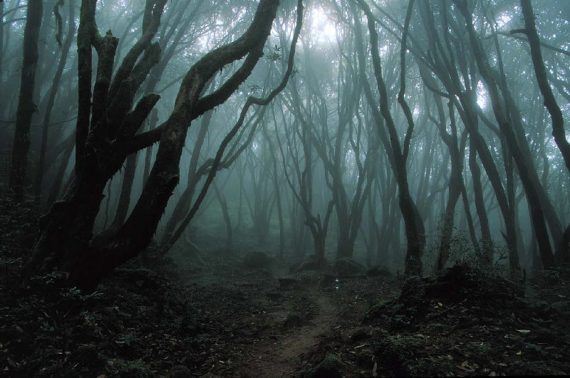 One may also notice that compasses do not work properly here. The needle may jerk and jump about spasmodically, or conversely do slow, languid circuits around and around. It is said that this is caused by magnetic anomalies induced by the rich deposits of magnetic iron in the area's volcanic soil, yet the disorienting effect of the forest goes beyond merely rendering compasses useless. Many hikers that venture into Aokigahara, even experienced ones, claim that it is oddly easy to get lost or confused in this dark and silent place. It is not uncommon to hear stories of hikers inexplicably traveling around in circles, or of being unable to navigate even short distances successfully. This bizarre effect has led to many visitors planting markers or plastic tape in order not to lose their way.

One may also become aware of the bizarre and creepy litter strewn about the forest floor. Pairs of shoes, both for children and adults, lined up upon moss covered, gnarled logs. A packet of entirely mundane photographs, song lyrics scrawled upon the envelope, lying forgotten and untouched amongst the underbrush. A child's doll lying wide eyed atop the twisted roots of a tree, its vacant eyes staring up as if trying to peer through the crooked branches above that blot out the sky. One can find a plethora of such odd trinkets and abandoned items interspersed among the trees. These items seem jarring and out of place here on the forest floor of this otherwise pristine wilderness, and only serve to add to a growing sense of foreboding. 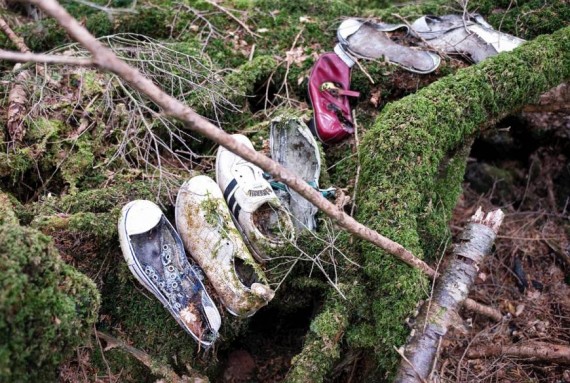 Regardless of such eery occurrences, many tourists still visit the area to see the magnificent scenery and the numerous rocky caverns scattered throughout the forest. Many of these caverns are dangerous to the unwary, and warning signs are a common sight interspersed amongst the thick trees, yet large numbers of visitors still brave the trek to see them every year.

Above and beyond the unsettling elements of the forest, there is an even darker side to Aokigahara. In addition to those brought here for the scenic beauty, caverns, and hiking, there are also the droves of poor, lost souls who come here every year to die.

Often referred to rather morbidly as "The perfect place to die," Aokigahara is said to be the most popular place to go to commit suicide in Japan and the second in the world after The Golden Gate Bridge in San Fransisco. Since at least the 1950s, the forest has attracted ever growing numbers of people who come to the solitude here for their final breaths, with 2003 seeing a record number of 108 suicides. These are only the bodies that are found by monthly patrols and annual "body hunts," in which police and volunteers scour the forest for victims. 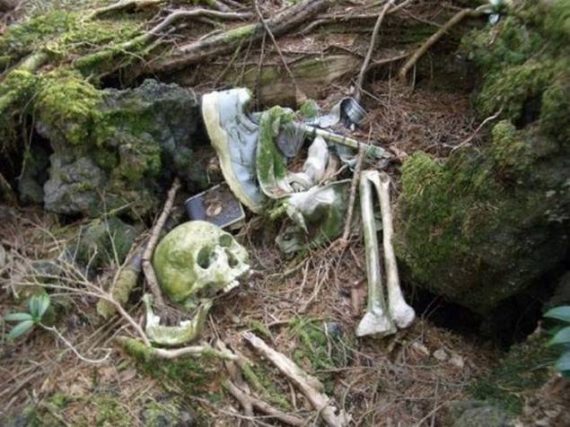 It is said that this number is likely even higher due to the remoteness of some of the areas within the forest, the numerous caves, crevasses, and caverns, and the forest's ability to quickly and thoroughly decompose remains. Some of the bodies of these victims are stumbled across by visitors to the area, who while hiking through the otherwise beautiful wilderness may happen across the horrific sight of a corpse hung from a tree or a skeleton with its legs poking out of the dense foliage on the forest floor. It is difficult for police and volunteers to locate all of the dead hidden away within this dark wood, or to accurately estimate how many have died. The only thing that seems to be known for sure is that every year the number of those who come to Aokigahara to die seems to be increasing.

Those looking to end their lives here have become so common that locals say they can easily spot the three types of visitors to the forest: hikers interested in seeing the stunning vistas of Mount Fuji, curious thrill seekers hoping for a glimpse of the macabre, and those who don’t plan on returning. In an effort to end the alarming trend of people coming to Aokigahara to end their lives, certain measures have been implemented such as putting up signs throughout the area urging those who have given up hope to reconsider their actions and turn back, as well as installing security cameras and sending out police patrols. Even with such measures, it is thought that at least a hundred people a year likely meet their doom here. 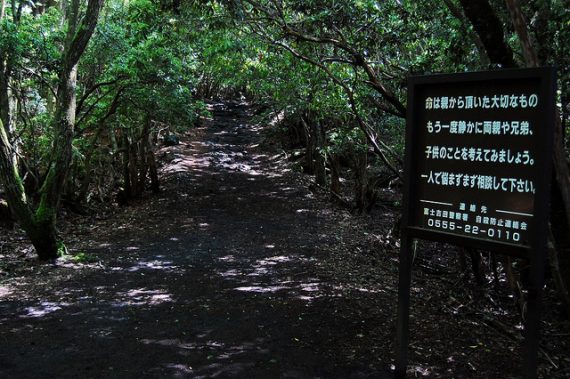 According to some, these lonely souls who are contemplating suicide are mysteriously and inexorably drawn to Aokigahara by supernatural forces within the forest that beckon them to come. Some survivors of suicide attempts in Aokigahara have told of having had the vague feeling of being somehow called to or pulled towards the forest, and of having the inexplicable compulsion to make the journey there.

Aokigahara is certainly not without its paranormal happenings. Even before records were kept on suicides within Aokigahara forest, the area had long been steeped in spooky lore and mythology. The dim forest was long thought to be the haunt of demons and ghosts who prowled the landscape and terrified travelers. It is also believed that it was once a popular place for the gruesome practice of ubasute, a custom in which a sick or elderly relative was allegedly abandoned in a desolate location such as a remote mountain or forest and left to die. In the case of Aokigahara, it was said that the victims of ubasate here became vengeful ghosts relentlessly prowling the twisted trees. 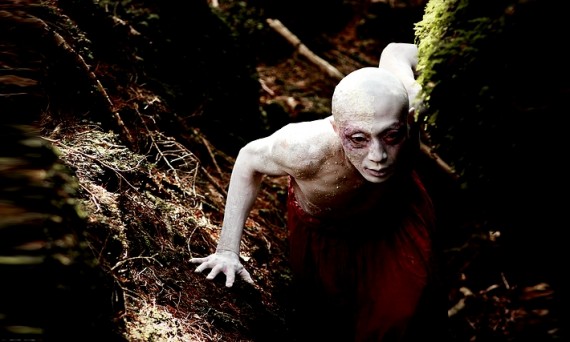 Many believe that the suicides committed in the forest have permeated the very trees in Aokigahara, generating paranormal activity, driving away wildlife, and preventing many who enter from ever escaping the forest's grasp. These people say that the forlorn souls of those who committed suicide in Aokigahara are doomed to eternally inhabit its depths, trapped within the gnarled trees and forever beckoning others to join them.

The reasons for wanting to end one's life are as varied as the people who come to Aokigahara to do so, yet one thing they all have in common is that something has brought them all from their far flung lives to this particular spot to do it. What quality is it that drives them to converge here in this shadowy, quiet wilderness to carry out their morbid business? Is it simply the tranquil beauty of the place, or the privacy afforded by the low probability of encountering anyone else in such a dense and vast forest? Or are they being beckoned by demons, ghosts, vengeful spirits, or some other inscrutable evil force?

Only those despairing, forgotten souls who spent their last moments in this dark quiet in the shadow of Mt. Fuji will ever know for sure.

Feces Up Your Nose? It’s a Good Thing!