It was anything but just an ordinary Tuesday night over the Hawaiian islands, as residents observed strange, colored illuminations in the skies. Within minutes, excited calls were flooding in to local news agencies, who carried the story of the mystery illuminations, along with photos taken by locals who captured the weird phenomenon with their camera phones.

But what could have caused these bizarre, iridescent streaks of light through the sky?

With recent reports of UFOs crashing in China and questions regarding a Russian rocket crash (which at least one YouTube user has already tied with alleged UFO activity), the minds of nighttime observers are alive with possibilities as to what, if anything, may be appearing in our skies.

While the verdict may still be out on several of the mysteries above us, there does seem to be a plausible explanation for the mysterious streaks of light seen over Honolulu Tuesday night; and their source is remarkably similar to an incident that occurred just years ago.

According to Department of Defense officials who spoke with the media on Thursday, the source of the weird lights over Hawaii had been a missile that was launched from the Pacific Missile Range Facility located at Barking Sands, Kauai.

One DOD official told reporters that, “During the test a simulated ballistic missile target was acquired, tracked, and engaged by the Aegis Weapon System. Several fire control and engagement functions were exercised during the test.”

Now produced by Lockheed Martin, the Aegis Weapon System (more commonly referred to as the Aegis Combat System) is a naval weapons system that was originally constructed under the Missile and Surface Radar Division of RCA. Capable of both tracking and guiding weapons used to destroy enemy targets, it is among the most advanced guided-missile technology in existence today. In addition to the U.S. Navy, Aegis is used by Korean, Spanish, Japanese, and Norwegian naval units.

And speaking of Norway, the mistaking of a missile launch for strange aerial phenomenon is no stranger to the Scandinavian countries. In 2010, a now famous failed Russian missile launch resulted in a curious-looking spiral shape in the sky, which Norwegian observers famously had mistaken for being a UFO. Looking to nature for an explanation, astronomer Knut Jørgen Ødegaard had initially guessed that the object had been caused by a fireball meteor, while other observers offered a different explanation: perhaps it had been a rare, never-before-seen variety of the aurora borealis.

While numerous cases involve natural phenomenon or missile launches that are mistaken for UFOs, there is also a long history of strange phenomena witnessed by pilots, military officials, and other trained observers which seems to point to an odd variety of guided missile or drone technology which, on occasion, have been reported flying dangerously close to commercial airplanes (for more on this subject, take a look at The Ghost Rockets: Mystery Missiles and Phantom Projectiles in our Skies). 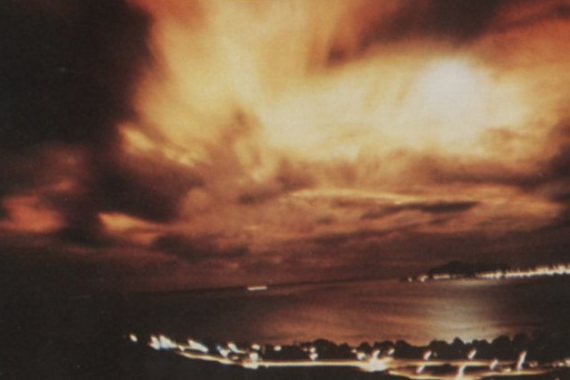 Tuesday night's light show over Honolulu certainly wasn't the last time that strange aerial phenomenon has been reported over the Hawaiian islands. Dating back to the 1950s, U.S. missile tests aimed at launching nuclear weapons into the upper atmosphere were conducted at Johnston Island in the South Pacific.

One of these tests, codenamed Starfish Prime, resulted in the successful detonation of a nuclear warhead in space on July 9, 1962. That evening, the sky was seen to glow an eerie red, which was visible nearly 1500 kilometers away. Few would argue that Tuesday night's missile launch was probably tame compared with a nuclear warhead launched into space... one more reason we should all be very glad this hasn't been a recurring practice over the years.