When it comes to Unidentified Flying Objects and the British Government, there is one question that I am often asked: for how long have British authorities been investigating UFO-like phenomena? While it is generally accepted that the so-called modern era of UFO sightings began on 24 June 1947 - following the now-historic encounter of pilot Kenneth Arnold - documentation has surfaced showing that the British Air Ministry conducted investigations of both the "Foo Fighter" sightings of the Second World War and the Scandinavian "Ghost Rocket" phenomenon of 1946.

Official investigations within the British Isles of unusual aerial phenomena, however, started earlier than that - much earlier, in fact. One of the most notable "pre-Arnold" reports can be found within the archives of the British Admiralty and dates from, rather incredibly, 1915!

Prepared by a Lieutenant Colonel W.P. Drury, the Garrison Intelligence Officer at Plymouth Garrison, Devon, England, the four-page paper is titled REPORT ON THE DARTMOOR FLOATING (OR BALLOON) LIGHT.

It concerns a series of strange events that occurred on the wilds of Dartmoor (the setting for Sir Arthur Conan Doyle's classic novel, The Hound of the Baskervilles). Lt. Col. Drury advised his superiors at the Admiralty that on 28 June 1915 he and a colleague, one Lt. C. Brownlow of Naval Intelligence, had interviewed a Miss Cecilia Peel Yates at Dolbeare Cottage, Ashburton, about an unusual experience:

"She informed us that a few mornings previously, just before dawn, having been awakened by the barking of dogs, she saw from her bedroom window a bright light in the sky, bearing N., and apparently suspended a short distance above the earth. It was too large and bright for a planet, and, as she watched, it swung to the N.E., and disappeared. Haytor is due North of Ashburton and 4 miles distant as the crow files." 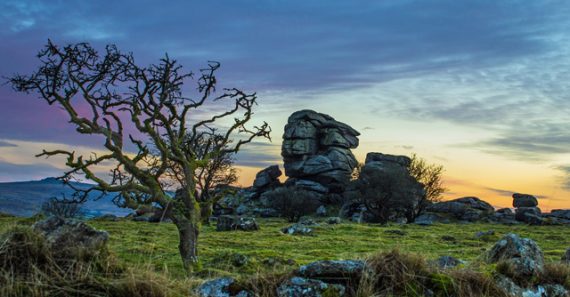 "Although we had entirely failed to shake the lady's evidence by cross-examination, we deemed her story so wildly improbable that we excluded it from our official report. But shortly afterwards reports of a similar phenomenon were received from the neighbourhood of Hexworthy Mine, which is 5 miles to the N.W., across Dartmoor.

"On July 12th, Lieutenant Brownlow and I proceeded to Sherril, near Hexworthy, and interviewed Mrs. Cave-Penny and her daughter, from whom the report emanated. Their house, an isolated form on the moor, commands a clear view of the mine, which is two-and-a-half miles distant. They stated that on several occasions they had watched a bright white light rise from a point a few hundred yards to the Eastward of the mine, swing across the valley to about the same from Totnes, and a paddock some distance West of it, and disappear.

"The light sometimes rose above the skyline, at others it showed against the moon of Down Ridge, on which the mine is situated. On each occasion it rose from the same spot and followed the same course. Mrs. Cave-Penny is a rather excitable, irresponsible Irish lady, but we had no reason to doubt her evidence in the main, and her daughter's testimony (which fully corroborated that of her mother) was most clear and definite. This floating light against Down Ridge has been reported from the Hexworthy district on several occasions since, the last being a few nights ago."

Four weeks later, Lt. Col Drury informed his superiors at the Admiralty that encounters with the unidentified light were now being reported from additional locations on the moors, too: "About the middle of August this peculiar light was reported from two other points, viz., a meadow at Dartington Manor, about two miles belonging to Barton Pines, a large country house on high land overlooking Paignton.

"Dartington Manor is the home of the Champernownes: Barton Pines is owned by a Mr. William Whitley, formerly of the Life Guards. On more than one occasion Mrs. Whitley had reported that she and other witnesses had seen the floating light immediately above the belt of fir trees which screen the paddock from the garden and house. Brownlow, the Detective Police and I have separately interviewed Mrs. Whitley on various occasions, and we have all found her perfectly consistent in her story.

"For some time Mr. Whitley was sceptical, but, having seen it himself, he is now as convinced of its existence as his wife. The paddock commands an extensive view of Tor Bay in one direction and a long chain of the Dartmoor Tors in the other."

Drury continued: "The Dartington 'floating light' was reported by Mr. Falkland Ricketts of Gatcombe Manor, who had also seen the Barton Pines occurrence. After several further reports from this witness, I obtained the sanction of the G.O.C., to watch one of the three points enumerated until I saw the light myself. I selected the Dartington Point, and, accompanied by Mr. Brownlow, began to watch from a position immediately opposite near the main Totnes-Newton Abbot road. On the third night we both saw the phenomenon precisely as it had been described at Hexworthy and Barton Pines."

But what, precisely, was it that Drury saw on Dartmoor? His next statement makes for notable reading:

"About 9.30 that night (September 4th) we observed a bright white light, considerably larger in appearance than a planet, steadily ascend from the meadow to an approximate height of 50 or 60 feet. It then swung for hundred yards or so to the left, and suddenly vanished. Its course was clearly visible against the dark background of wood and hill, though, the night being dark, it was not easy to determine whether it was a little above or beneath the skyline.

"We were within a mile of the light and both saw its ascension and transit distinctly. The Dart flows between Dartington and our post of observation, and, unfordable [sic],it was impossible to reach the meadow from which the light arose."

Illustrating that he had carried out a number of personal nighttime investigations of the area in the hope of seeing the unidentified object, Lt. Col. Drury added more pertinent and illuminating information: "I have watched Down Ridge, Dartington Manor, and Barton Pines by night on several occasions before and since September 4th, but that date is the only time I personally have seen this 'floating light' which has so often been reported by other and reliable witnesses.

"It is to be observed that a ruler-edge laid upon the map will pass through the three indicated points, and that the suspect Buckfast Abbey (which harbours some 40 un-naturalized Germans of Military age) lies on the centre of the line. The line runs from the direction of Princetown to the Coast of Paignton. These lights, which are presumably lifted by captive balloons, are of an entirely different character from that of the stray fire balloon reported over Ashburton." 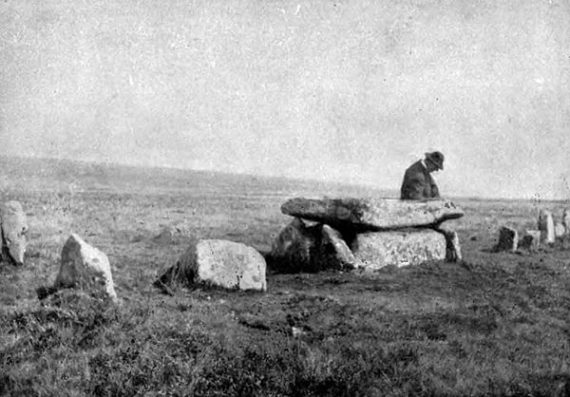 Lt. Col. Drury concluded his report on the curious encounters for the Admiralty thus:

"It is suggested that the former may be employed to lift an aerial for wireless purposes. In any case it is difficult to find a normal cause for the credibility attested and oft recurring phenomenon, unless it be some form of illicit signalling. The proposed methods of detecting it I have dealt with in my former report 'Suspects and alleged Illicit Signalling on N.E. Dartmoor'. W.P. Drury. Lieut. Colonel, R.M.L.I. Intelligence Officer."

Stay tuned: part-2 of this article will soon follow...

Rock Lines in Peru Were GPS for Ancient Fairgoers