Disco may be dead but the mollusk known as the disco clam lives on, entertaining underwater creatures and divers alike with the flashing lights shows it puts on using its mirrored lips. While there are other bioluminescent fish and insects that can make lights, a new study found that the disco strobes of the disco clam are something completely different.

Dive instructor and University of California, Berkeley, graduate student Lindsey Dougherty not only discovered the source of the disco clam’s lights, she did her Ph.D. on it. Ctenoides ales is a species of saltwater clam native to the central Indo-Pacific region from Indonesia to the Palau Islands and New Caledonia. The bright orange clams are well known to divers and scientists believed their light was generated by a chemical reaction similar to bioluminescent creatures like anglerfish and fireflies.

Dougherty and her team used transmission electron microscopy, spectrometry, high speed video, energy dispersive x-ray spectroscopy and computer modeling to study the lips of the clams where the light shows up. They found that the clam’s inside lips contain tiny spheres of silica only 340 nanometers in diameter that reflect ambient light, especially blue light. The on-off flashes are created by curling and uncurling the lips at a rate of twice a second to expose the outer lips, which have no silica reflectors.

As many people asked in the 70’s, why disco? Dougherty’s next research will determine if the disco clam flashes its lights to attract food, like plankton, or scare away predators, like divers who prefer rock or rap. She’s also studying the 40 eyes of the clam to see if they can see their own lights and, if so, do they use them to signal to other clams.

According to the story in the current issue of the British Journal of the Royal Society Interface, Dougherty hopes the disco clam can help humans develop better and more efficient lighting for dim locations.

But not in disco halls … please! 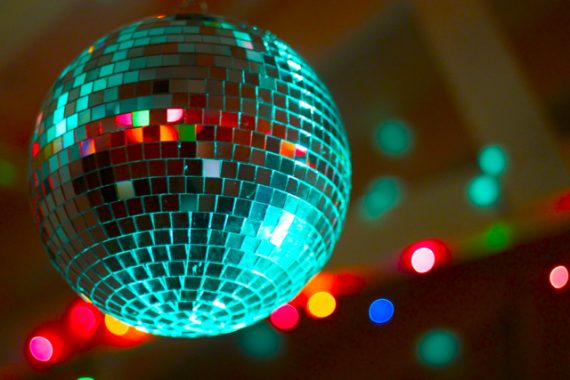 There’s a Diamond in the Sky For Lucy