Recently here at Mysterious Universe, my colleague Tom Head presented the fascinating account of the mystery of the 9 foot great white shark that was attacked, pulled into the depths and apparently consumed by a mysterious predator. The report has sparked much discussion and debate as to the identity of the culprit, with one name in particular being thrown around- the giant prehistoric predator, Carcharodon megalodon.

It certainly is an intriguing and perhaps somewhat frightening notion that this enormous underwater killing machine, often called the deadliest predator that ever lived, could be still roaming the Earth’s ocean’s and preying on great white sharks. In order to truly understand and form our opinions on this epic predator of the deep and the possibilities of its survival, perhaps it is necessary to take a good look at this creature and the modern evidence for its possible existence.

For readers unfamiliar with this creature, Carcharodon Megalodon, mostly referred to as simply the Megalodon, was a truly gigantic shark that prowled the Earth's oceans during the Cenozoic Era, around 28 million to 1.5 million years ago. The Megalodon typically reached lengths of up to 60 feet long, with some estimates suggesting lengths of up to 80 feet, dwarfing even the largest of great white sharks and making Megalodon truly a formidable predator to contend with. In addition to its vast size, the Megalodon possessed giant, serrated teeth that were as long as a grown man's hand, far bigger than the teeth of even the largest current sharks. The Megalodon's size and deadly set of teeth were perfectly suited to capturing its prey, which mainly consisted of whales and other large sea animals. Such a monster would have been truly a terrifying sight to behold.

Although the exact causes remain unknown, it has long been commonly accepted that Megalodon went extinct approximately 1.5 million years ago. Even so, there are many who believe the Megalodon still exists out in the deep, dark waters of the world's oceans, and it has been a common target of cryptozoologists seeking to uncover its continued existence. Yet how plausible is it that Megalodon still survives into the modern age? Let us look at the possibilities and available evidence.

Perhaps the first thing to look at is the physical plausibility that a long thought to be extinct, massive predator such as the Megalodon could still be out there. Looking at examples of other species of shark exhibiting ancient characteristics, so-called "Living Fossil Sharks," such as the frilled shark, we can see that it is indeed possible for prehistoric, "primitive" sharks to survive into modern days. David Wong of the Natural History Museum in London explained to Discovery News:

“Up until recently, it was supposed that, like most marine organisms, sharks suffered a catastrophic extinction at the K/T boundary (when dinosaurs went extinct). However, the studies that suggested this did not take into account the changes in sea level, climate and the amount of the sedimentary record missing.”

He added that one recent study,

“demonstrates that there was very little extinction of deeper water sharks.”

Could this also describe Megalodon, which was a deep water shark as well? It seems plausible. Add in the fact that Megalodon had what is known as a cosmopolitan distribution, meaning it was found worldwide in a range of appropriate habitats, and you have a lot of possible areas for the massive shark to be hiding. 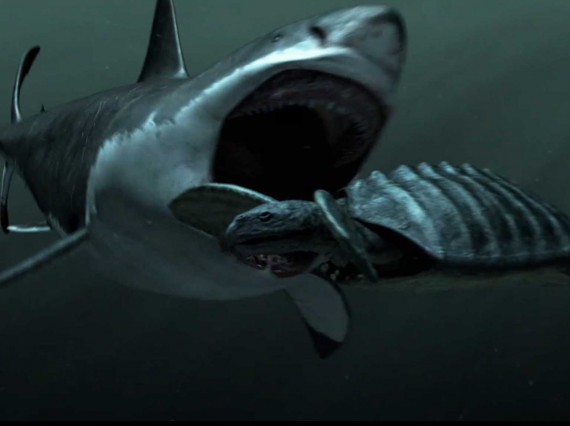 Finding such a large creature living undetected in the deep, or rediscovering a supposedly extinct marine animal would certainly not be unprecedented. In recent years, there have been a variety of such discoveries. The first actual footage of a giant squid was captured in 2004, and in 1952, an even larger squid, the colossal squid was discovered to lurking in the deep. Both animals are extremely elusive and very little is known about them. Additionally there is the megamouth shark, a large shark that can get up to 16 feet long, that was just discovered in 1976. Perhaps the most well-known example of a presumably extinct animal showing up after a long absence is the Coelacanth, a prehistoric fish thought to have been extinct for 65 million years before a live specimen was pulled up off the coast of South Africa in 1938.

In light of such discoveries, it certainly seems not totally beyond the realm of possibility that Megalodon could at least theoretically still be out there. However, just because it can still survive does not necessarily mean that it does. To make that determination, it is perhaps useful to look at any evidence of the continued existence of Megalodon in the form of both physical evidence and possible sightings.

Physical evidence of Megalodon, or any shark for that matter, is hard to come by. This is namely due to the fact that these are cartilaginous fish, which results in the body not preserving well at all. All we really have to go on with creatures such as Megalodon is their teeth. In that respect, one of the most exciting discoveries pointing to the Megalodon surviving into modern days was dredged up on a seabed near Tahiti in 1875, by the British ship the HMS Challenger. When analyzed and dated, the teeth were found to be only between 10,000 to 15,000 years old, putting them far beyond the established Megalodon extinction of 1.5 million years ago and concurrent with modern humans. Although further tests have given mixed results on the dating of these teeth, it certainly lends credence to the idea that these massive sharks could have survived into modern days.

Above and beyond this tantalizing physical evidence, there have been various accounts and sightings over the years that possibly point to a creature such as Megalodon.

Locals and fishermen of Mexico's Sea of Cortez have long told seeing gargantuan sharks with lengths of  up to 60 feet long, which they refer to as "Black Demons." Sightings and even alleged collisions between boats and the huge monsters are so persistent that the popular TV show Monsterquest even launched an investigation of the area. Although they produced no evidence, the reports continue to come in from time to time.

Whether the Sea of Cortez harbors a remnant population of Megalodon, it certainly has its share of very large sharks nevertheless. In 2012, a truly huge great white shark measuring 20 feet long and weighing over 2,000 pounds was caught in a net in the Sea of Cortez near Guaymas. If the measurements are indeed accurate, then the shark would be one of the largest specimens of great white ever recorded.

Other accounts of Megalodon sightings can be found from many parts of the world. Naturalist David Stead described in his book Sharks and Rays of the Australian Seas the 1918 account of fishermen of Broughton Island, New Zealand, who saw a frightening shark so incredibly enormous that they refused to fish the area. The shark had apparently destroyed fishing gear and devoured whole catches.

Another account comes from the author B.C. Cartmell, who  in his 1978 book Let’s Go Fossil Shark Tooth Hunting, included this report:

“In the 1960s along the outer edge of Australia’s Great Barrier Reef, an 85-foot ship experienced engine trouble, which forced it to weigh anchor for repairs. Although the men subsequently refused to openly report what they had seen for fear of public ridicule, the captain and his crew later told friends of sighting an immense shark as it moved slowly past their ship. Whitish in color, they were awed by its size. It was as long, if not longer, than their boat! Experienced men of the sea, they too were certain the creature was not whale.”

Another author, novelist Zane Grey, who also happened to be an avid angler, told of his own frightening account. He wrote of encountering what he referred to as a "man-eating monster of the South Pacific," which he claimed was larger than his 40-foot-long boat. The shark reportedly was yellow and green in color, with some white spots. The monstrous shark was described as having huge pectoral fins, and a large, square head. Grey was a regular deep sea fisherman who was well acquainted with sharks and other sea life, and he specifically insisted that what he had seen was no mere great white shark.

South Africa has also had several sightings over the years of sharks far surpassing the sizes commonly seen in the great whites of the vicinity. Some of these accounts are truly harrowing. In August 2013, Discovery Channel aired a "Shark Week" episode entitled Megalodon: The Monster Shark Lives, which featured a story of the plight of a Cape Town fishing vessel that was allegedly attacked and capsized by a large animal speculated to have possibly been a Megalodon in Hout Bay. There were reportedly no survivors of the doomed vessel.

Are these sightings reports and accounts evidence that people are seeing surviving Megalodon? Is it difficult to say for sure. What is certain is that the world's oceans are vast, deep places that we have barely scratched the surface of in terms of exploration and understanding. The old adage that we known more about the surface of the moon than our own oceans is not an exaggeration. The ocean's are notoriously difficult to study, and we have a shockingly incomplete picture of what discoveries are there awaiting us.

With such mysterious expanses of our planet still largely uncharted and unexplored, it seems entirely possible that one day, we will find that the Megalodon still cruises the depths hunting its prey. Is such a creature responsible for the killing of the 9 foot great white shark? We don't know. But it is certainly fun to think about.

Moon Getting a Bulge – Blames the Earth