It's time once again to delve into the sinister side of the silver screen, beginning with an eerie rumor from Hollywood's golden age centred around one of the most iconic movies of all time, 'The Wizard of Oz'. Released by MGM in 1939 and based on L. Frank Baum's series of children's fantasy novels, the film shot the young Judy Garland to worldwide fame and is considered a landmark in motion picture history. Could this beloved classic possibly contain something as grisly as actual footage of an on-set suicide? 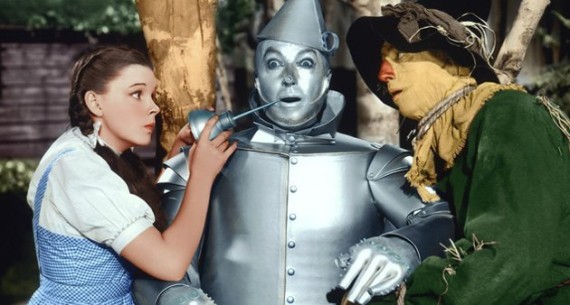 Let's not beat around the bush - the answer is an emphatic no, but how did this rumor gain such notoriety? Over the years following the film's success, tales of the lecherous behavior of the movie's diminutive munchkin characters began to spread through magazine articles and Judy Garland's talk show appearances. Even in those days such gossip was nothing new, as people are always willing to believe there's something seedy going on beneath the saccarhine veneer, particularly in the case of something as syrupy as 'Oz' though the stories of debauchery are widely believed to have been exaggerated (if not fabricated entirely).

Following the Tin Man's introduction scene, he joins Dorothy and the Scarecrow as they follow the yellow brick road toward Emerald City. It is here that eagle-eyed viewers (once again the advent of home video played a huge role in the myth gaining traction) noticed a shape in the background, seemingly suspended from a tree and slowly turning around as if dead. The popular story became that the figure was that of a munchkin actor who had hanged himself due to an unrequited love or an unhappy love affair. Of course the idea that such an event would not only go unnoticed by the cast and crew, but would also be kept in the final print of the film is clearly ridiculous - but as always, if a story is salacious enough, there are some that will be willing to suspend their disbelief. The most commonly held explanation for the mysterious shape is that it is the form of a bird - several were used in the background of scenes to give a more realistic feel to the 'outdoor' scenes, which were in fact filmed on MGM's soundstages.

1976's British horror tour-de-force 'The Omen' certainly seems a more likely culprit for a 'cursed movie'. Gregory Peck stars as Robert Thorn, a wealthy American ambassador who finds himself surrounded by a string of mysterious deaths - eventually leading him to consider that Damien (Harvey Stephens), the child he is raising, may in fact be the anti-Christ. The film's classic status is well deserved, and 'The Omen' is required viewing for any horror fan - but do claims of an associated curse hold any validity, or have the Satanic themes of the story simply fired-up a few overactive imaginations? The string of misfortunes that befell the cast and crew certainly offer up some food for thought.

Two months prior to filming, Gregory Peck's son committed suicide through gunshot wound, naturally casting a large shadow over Peck's involvement. As he flew to London to begin work on the picture, his plane was struck by lightning. Within weeks the film's executive producer Mace Neufeld would also fly in a plane that was struck by lightning as he made his way from Los Angeles. Following Neufeld's and his wife's arrival, their hotel was attacked in an IRA bomb raid - as was a restaurant where he, Peck and others working on the film had booked a table just days later. A narrow escape - and not the only one. A plane which had been planned to capture aerial scene-setting footage for the film was switched to another service by the airline and crashed on the runway, killing everyone on board. An animal safety expert/handler was eaten alive after being pulled into a lion enclosure two weeks after serving as an adviser on the set.

There are also various claims that the curse has followed those involved in the film in the years since, including a stuntman who worked on the film suffering injuries following a fall who claims that he was pushed by an unseen figure. Finally special effects artist John Richardson, who designed the film's grisly death sequences was in a car accident in Holland close to a year after 'The Omen' wrapped. While Richardson survived, the fatal injuries suffered by his female companion (including decapitation) bore striking similarities to scenes from the film. Rumor has it that upon clawing his way out of the vehicle, Richardson came across a road sign indicating that he was 66.6km away from the town of Ommen.

Take a Vacation from Yourself: Brain-Computer Interface Technology