Look out Triceratops … you could be knocked down a notch on the “favorite dinosaur” list by a newly-discovered horned dinosaur (ceratopsian) with a face that both its mother and all dinosaur fans will fall in love with.

Two specimens of Mercuriceratops gemini were discovered, one in north central Montana and a nearly-identical one at the Dinosaur Provincial Park in Alberta, Canada. It was named Mercuriceratops, which means “Mercury horned-face,” for the wide neck shield on its head that resembles the wings on the helmet of the Roman god, Mercury. Because twin fossils of the same species were found, it was named “Gemini” after the Greek twins.

The plant-eating Mercuriceratops gemini was approximately 20 feet (6 meters) long, weighed more than 2 tons and lived 77 million years ago during the Late Cretaceous Period. It had a parrot-like beak and two long brow horns above the eyes.

The twin find is important because it proves the unusual neck shield was not an aberration due to fossilization and that Mercuriceratops gemini is a previously unknown species of horned dinosaur. In the report published online in the journal Naturwissenschaften, lead author Dr. Michael Ryan, curator of vertebrate paleontology at by The Cleveland Museum of Natural History, describes the uniqueness and advantages of the Mercurial look:

Mercuriceratops took a unique evolutionary path that shaped the large frill on the back of its skull into protruding wings like the decorative fins on classic 1950s cars. It definitively would have stood out from the herd during the Late Cretaceous. Horned dinosaurs in North America used their elaborate skull ornamentation to identify each other and to attract mates—not just for protection from predators. The wing-like protrusions on the sides of its frill may have offered male Mercuriceratops a competitive advantage in attracting mates.

The discovery was made by members of the Southern Alberta Dinosaur Project in well-studied areas, so the team is hoping there are more unknown species to find both in Alberta and Montana.

Sorry Triceratops – Mercuriceratops is this year’s Best Looking Dinosaur and you're not even in the running for Miss Congeniality. 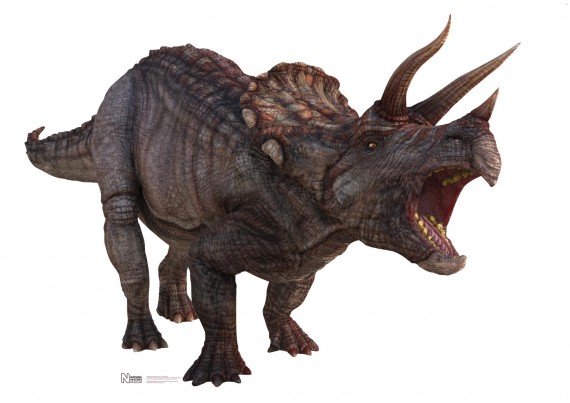 Max Planck and the Aliens