"The good news is your dates are here. The bad news is...they're dead." So ran the tagline for 'Night Of The Creeps', and whether you're a seasoned zombie fan or are beginning to suffer from burn-out on Hollywood's current monster du-jour, this one remains a gem worth checking out from the decade when teen horror ruled. Distinguished by some memorable performances and a quirky sense of humor, the film was released in 1986 to surprisingly disappointing box office returns. Written in under a week and directed by future 'Tales From The Crypt' alumnus Fred Dekker, perhaps best known for the much-loved 'Monster Squad', 'Night Of The Creeps' is imbued with the same kind of knowing nods to - and clear affection for - the classic chillers of the 1950's. 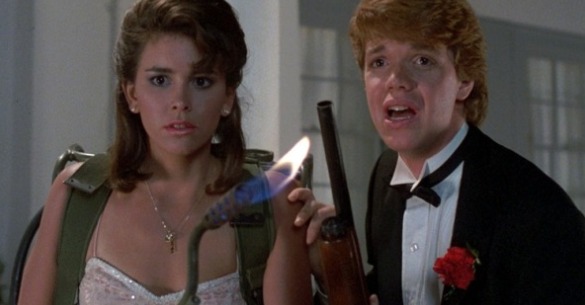 It's fitting then that we begin in glorious black and white (looking particularly fine and crisp on the recent HD/Blu-Ray releases) after a group of extra bizarre looking extra-terrestrials accidentally lose a canister containing some sort of experimental life-form when it is ejected from their spaceship. As you may have guessed the container slams to Earth, where an axe-wielding maniac is seemingly about to display his homicidal tendencies on a couple enjoying a cozy car ride to make-out point. Against his girlfriend's advice (and let's face it, against common sense) the boy takes time out from the canoodling to investigate the falling object. Our previously lip-locked Lothario finds his mouth otherwise occupied as a slimy slug-like creature emerges from the canister and shoots down his mouth. Bon appetite! As you'll have noticed, the film sets out it's stock from the outset, reveling in the cliches of the genre as it pays homage. Tonally and stylistically, 1958's classic 'The Blob' seems a particularly strong inspiration - though 'Creeps' effects are obviously (and thankfully) more gruesome and grisly. 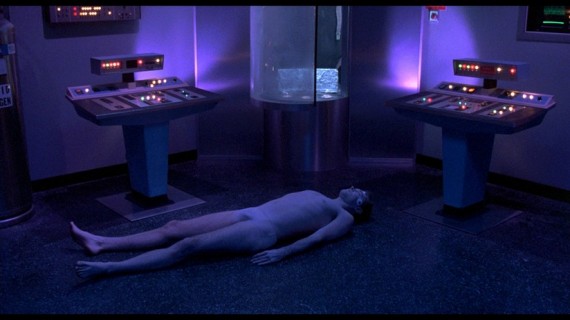 We cut to then-present day, and if you're looking for some 80's cheese in all it's gnarly, bodacious and rad ridiculousness you won't be disappointed. At Corman University (named after Roger - one of many horror name checks for eagle-eyed viewers to spot) the lovelorn and nerdy student Chris Romero (there's another), played by Jason Lively is being comforted by his wise-cracking pal J.C. (Steve Marshall) following a break-up. His pining proves short-lived however when having being dragged to a party, he falls head over heels for popular girl Cynthia (Jill Whitlow). 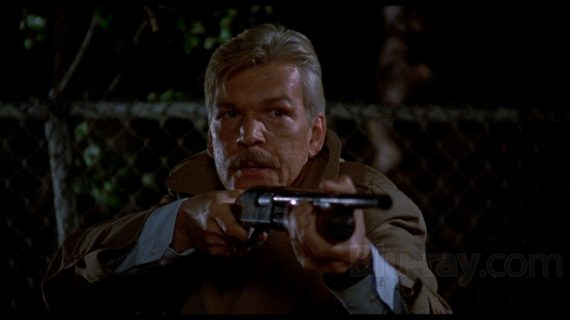 In order to raise their social standing and get Cynthia's attention,  J.C. suggests they attempt to join a fraternity, which soon leads to a dare that inexplicably requires the pair to steal a corpse from a nearby cryogenics lab - a corpse that has been in storage there since a certain  alien encounter almost thirty years previously. The great Tom Atkins (of 'Halloween III: Season Of The Witch', 'Creepshow' and many others) is pitch-perfect as the mandatory gruff and worn-down cop who is sent to investigate. Despite his efforts, it's not long before the parasites break loose, turning the students of Corman University into the staggering undead. In one particularly funny scene we're shown that for some of the jocks, the transition is minimal.

From the high quality of the effects and impressive and spacious sets, it's clear that despite its B-Movie aspirations, 'Night Of The Creeps' had a not-inconsiderable budget, which if anything makes its lack of promotion and recognition even more of a mystery. Despite never having been a big hit 'Night Of The Creeps' is a wildly entertaining ride that should find a place in the heart of any 80's horror fan. If you loved 'Fright Night', 'Creepozoids' or 'Monster Squad' and this one has slipped by your radar, consider giving it a shot the next time you're reaching for one of your well-worn favorites. You'll be in for a real treat and a nostalgia trip back to the days when movie's were all about fun.