Placoderms Had Legs For Sex and Spawned A New Position

Placoderms were among the earliest jawed vertebrates or gnathostomata, living for 70 million years before becoming extinct some 360 million years ago. They were the first megapredators and were often the size of today’s Great White Sharks. Placoderms were also the first vertebrates to copulate rather than spawning in water, which means the male developed some sort of sex organ to implant its sperm inside the female.

Because of their similarity to sharks, it was believed the claspers (male genitals) of Placoderms were parts of the pelvic fin. New research published recently in the Biological Reviews of the Cambridge Philosophical Society suggests otherwise.

Kate Trinajstic, a vertebrate palaeontologist at Curtin University in Australia, discovered that the claspers and female basal plates in placoderms were not connected to the pelvic fin but were instead a separate pair of limbs or legs located at the rear of the fish.

What’s even more interesting is that the claspers were not rigid like the pelvic fin but flexible so they were able to move in any direction, including forward, which means the placoderm Kama Sutra had one picture of them in the missionary position. 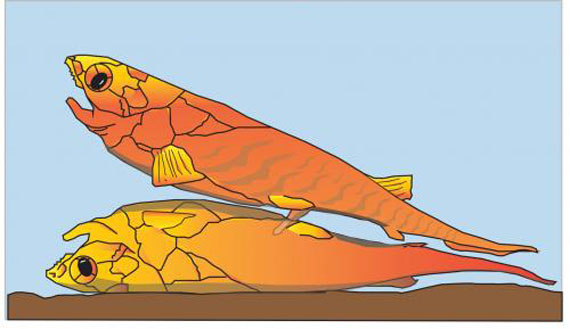 Placoderms also developed jaws at about the same time as their claspers, which may have helped in copulation and, along with the sex organ/legs, would have definitely spawned some “placoderms do it with a bite” jokes.

The Moon Isn’t Two-Faced and Now We Know Why