Greetings, fellow Coppertops! Get ready for a mind-twisting batch of Red Pills, carefully cooked by yours truly, which will let us explore the precognitive side of Football players, Deepak Chopra's challenge to skeptics, and paranormal activity inside the world's most famous prison; after that, we'll continue to be marveled with Elon Musk's bold vision of the future, and finish our mission by studying an even bolder revision of our ancient past. Apologies for depriving you of your favorite MU column last week, but as you know it was Father's day, and I decided to spend the evening with my spiritual father, Morpheus --unfortunately all he wanted to do was challenge me to a jumping contest! I think the old guy is getting senile... 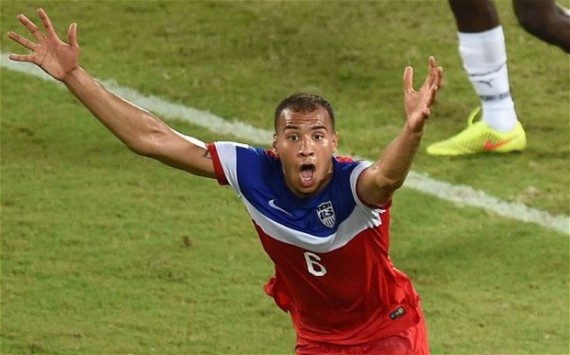 Whereas Morpheus may be my spiritual father, my biological one hasn't missed a single game of the World Cup. I'm aware that many of my American readers may not show the same interest in Soccer, even though the US team had a good performance against Ghana, all thanks to the last-minute goal scored by 21-year-old John Brooks, who until that day had never even played an official game for the USA.

Talk about a dream come true --Literally! Brooks claims that 2 nights before his World Cup debut, he dreamed of scoring the winning goal on almost exactly the same circumstances:

The goal in the dream was also a header scored from a corner, perhaps unsurprisingly given Brooks is a centre-back. At 6ft 4in, he has always had the potential to be a weapon for the USA at set-pieces, although Jürgen Klinsmann may prefer Brooks not to play again any time soon.

A true precognitive dream, or was Brooks perhaps 'amped' by his oneiric experience to improve his real-life performance? We'll probably never know; there's no doubt one of the talents of the best sports stars, is their capacity to visualize themselves executing the desired action beforehand, so right now I'm wondering if VR technologies like the Oculus Rift will soon be exploited to enhance the performance of athletes.

We shouldn't forget that in our present Materialistic paradigm, any mention of prophecies or precognitive dreams will be automatically met with derision by a whole cadre of 'professional skeptics'. Whenever confronted, many of those individuals will inevitably invoke the '1 Million Dollar Challenge' established by the JRE foundation; "if psychics claim to be legit instead of charlatans" they'd say, "then why don't they participate in the challenge and convince us once & for all?".

My personal take is that Dr. Chopra's so-called 'challenge' to militant skeptics, is as much of a crude PR stunt as the original million dollar prize issued by the JRE foundation was, and that NEITHER of them is a serious scientific proposition, nor they help to advance the argument in favor or against the Materialist paradigm --if you want to know why I say this, I urge you to read The Myth of the Million Dollar Challenge, written by my mentor Greg Taylor.

Yes, I'm against the notion that we humans are nothing but biological robots & Death is the ultimate end of existence, but if Chopra is really willing to spend 1 million bucks contesting that dogma, then why not giving it as a grant for a serious scientific researcher willing to explore radical theories, the same way Chester Carlson founded the work of Dr. Ian Stevenson? Just imagine how someone like Dean Radin, Rupert Sheldrake & Rick Strassman could do with that kind of dough!

Please share your thoughts on these big-bucks challenges in the Comments section.

A Ghost in Alcatraz? 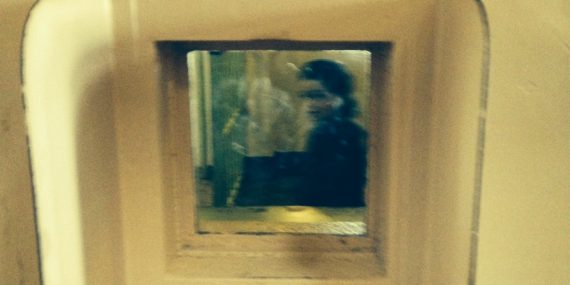 I don't take these challenges as a serious proposal to prove or disprove psychic powers, the same way I don't take 'ghost-hunting' reality TV shows as serious evidence of the afterlife. By now everyone should take ANY photo of a ghost, a UFO or Bigfoot with a grain of salt the size of the Rock of Gibraltar.

Then again, every so often a picture emerges that proves to be interesting to ponder upon. Such is the case of the above image, taken by an English couple during their trip at Alcatraz island --now why would ANYONE think visiting a former federal penitentiary is a fun tourist attraction, may be even a bigger mystery.

Teaching assistant Sheila Sillery-Walsh from Birmingham took the photo on her iPhone 5c when she visited the former prison in April while on holiday in San Francisco with her partner, Paul Rice.

The 48-year-old said: 'Alcatraz Penitentiary is a must-see for any tourist. However as soon as we entered the prison, everything felt very eerie. I didn't feel comfortable there.

'Whilst doing an audio-tour of the place, I casually stopped to take a snap of the empty visitation block window on my iPhone.

'When I glanced at the photo on my mobile, I saw this dark female figure in the picture. I looked at the window again and there was no-one in the room.

'I knew straight away that the woman in the photo was a ghost and showed the snap to Paul.

'From that point onwards, I wasn't interested in the Alcatraz tour anymore. I just kept looking at the picture over and over again!'

Ghosts have never been my Fortean forte, yet that doesn't mean I'm not fascinated by the occasional personal testimony or photographic evidence that may be indicative of an spectral manifestation. When listening to a recent interview with parapsychologist Lloyd Auerbach on The Paracast, in which he expressed his opinion in how in order to a ghost to appear, a witness endowed with a central nervous system is always needed --perhaps even the witness acts as a 'bio-generator' according to the theories of Dr. Barry Taff.

But then, how do we explain the occasional ghost pic that doesn't seem to be a blatant hoax or a misidentification? According to Auerbach, perhaps the discarnate entity is capable of 'manipulating' camera equipment, in order to appear in the picture! I'm not sure I agree with this idea, but it sure is interesting food for thought.

In Musk We Trust

If we ever going to solve the mystery of ghosts, UFOs or the loch Ness monster, I feel it will take some SERIOUS out-of-the-box thinking. The kind of thinking we expect of technocratic luminaries like Elon Musk, who is always ready to reinforce his image of a real-life Tony Stark.

This week has previously covered the many ways in which Musk is trying to leave his mark in the shaping of our future: From his ideas to create an ultra-fast transport system called the Hyperloop, to his commitment to evolve the auto industry past our current dependency to fossil fuels; BTW, the moment he announced the open-sourcing of Tesla Motors patents, he showed why he rightfully deserved to inherit the mantle of the greatest inventor of the XIXth century.

Then there's Musk's aspirations to help humanity become a multi-planetary species. Last week on an interview with CNBC in which he discussed SpaceX's plans to retrieve & reuse their rocket boosters, he also expressed his desire to see humans setting a foot on Mars, by no later than 2026.

Who knows? Maybe in a century or two, we may have to change the name of the Red Planet to Mursk. 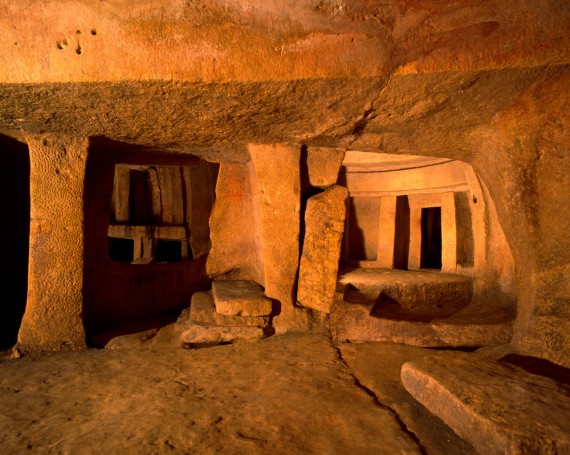 Elon is lucky, that he got to live in an age in which global communications can turn him into a household name. It makes me wonder about the thousands of anonymous geniuses, whose names were utterly lost in the sands of Time.

Geniuses like the ones who built the Hal Saflieni Hypogeum in the island of Malta, a subterranean structure that is currently believed to be around 5000 years old. A recent article in the online journal Phys-org discusses how modern researchers have discovered some incredible acoustic properties in this underground complex. Properties they believe, could have been deliberately intended to elicit altered states of consciousness.

During testing, a deep male voice tuned to these frequencies stimulated a resonance phenomenon throughout the hypogeum, creating bone-chilling effects. It was reported that sounds echoed for up to 8 seconds. Archaeologist Fernando Coimbra said that he felt the sound crossing his body at high speed, leaving a sensation of relaxation. When it was repeated, the sensation returned and he also had the illusion that the sound was reflected from his body to the ancient red ochre paintings on the walls. One can only imagine the experience in antiquity: standing in what must have been somewhat odorous dark and listening to ritual chant while low light flickered over the bones of one's departed loved ones.

As a person on the side of alternative thinking & against dogmas of any kind --be that religious or scientific-- I currently feel the popularization of ideas like the Ancient Aliens theory is becoming a bit counterproductive, because it's alienating many individuals from addressing a much needed discussion: The discussion that there is A LOT we currently don't understand about our ancient past, and that our ancestors were in possession of many impressive techniques to alter their perceptual capacities.

Many people think the idea that aliens came down to Earth to build the Great Pyramid is silly, and I can relate with that sentiment. At the same time, I think addressing the greatest wonder in the ancient world as *just* the ego-driven tomb of some pharaoh is beyond myopic. So obviously the Great Pyramid was not some prehistoric nuclear reactor left by a race of rock fetishist astronauts; but is it so preposterous to propose it may be a giant machine designed to alter the consciousness of a few chosen initiates, thanks to the advanced knowledge of a forgotten civilization?

Thanks to the new discipline of Archeo-Acoustics, we're starting to see old sites like Stonehenge & the Hypogeoum with new eyes --and new ears.

Until next time, this is RPJ jacking out; advising you to quiet the mind, so the heart can listen.

Melt Your Fat, with GooOOOLd!