Seized “Silk Road” Bitcoins to be Auctioned Off By U.S. Marshals

Does the name “Silk Road” ring a bell for you? For the loyal Mysterious Universe listener, you’ll remember the coverage of the “ebay of drugs” from last year. Silk Road was set up as an anonymous online market place focused mainly on the sale of contraband. Since launching in 2011, the Deep Web’s resource for illegal substances took in estimated earnings of nearly 2 billion dollars.

The FBI closed down the flea market for narcotics last October, following the arrest of the alleged Czar of the Silk Road, Ross Ulbricht, 30. Simultaneously, the feds took possession of the sites assets, which were primarily the currency of choice for people that want to remain anonymous: Bitcoins. Not just a handful of bit coins, but nearly 177,000 Bitcoins. Until very recently, this would have amounted to over $100 million at Bitcoins market value.

Since then, the decentralized form of currency has been quietly sitting in…the ether of the internet… growing in wealth to nearly 6 times their market value when the Bitcoins were first seized. That is, until last Thursday. 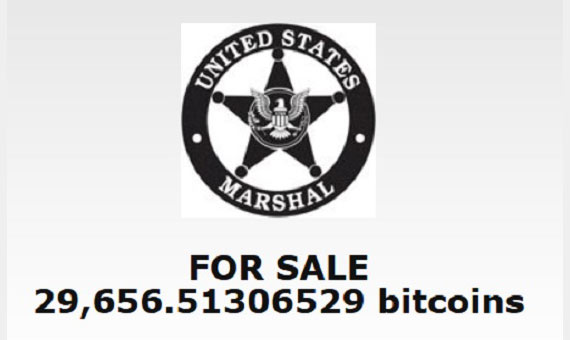 It was then that market data watchers like Zeroblock noticed that the United States Marshal Service had quietly moved nearly 30,000 Bitcoins to a new account. This was shortly followed by a press release stating that the U.S. Marshals were going to be auctioning off these Bitcoins, worth roughly $18 million, on June 27. This auction represents the Bitcoins that were confiscated from Silk Road, not including the 144,341 Bitcoins seized from Ross Ulbricht, which are currently in contention (he plead not guilty).

So if you ever wanted to feel the thrill of handling drug money, here’s your chance! You only need to send the Marshals Service a $200,000 deposit, and you’re good to go.

The Bitcoins will be divided up into 10 blocks, nine blocks with 3,000 Bitcoins each, while the tenth has 2,600. Winning bidders to be notified by June 30.

The real kicker is that, since the announcement on by the U.S. Marshals Service, the market value of Bitcoins has plummeted. Leading some to speculate that Bitcoin traders gain some pleasure by sticking it to the man.

Nessie is a Plesiosaur? Hell, No!