SETI from the Top Down

Mainstream science has a natural tendency to approach problems from the bottom up. Scientists like to understand simple building blocks before they turn their attention to complex systems. The science of astrobiology – the search for extraterrestrial life – is no exception. The questions that interest astrobiologists are typical “bottom-up” questions. How did primitive life first emerge here on Earth? What are the most extreme conditions under which micro-organisms can survive? Do similar conditions exist on other planets?

It’s often said that the discovery of extraterrestrial life, if and when it happens, will change the world forever. But is that really true, if all we’re talking about are simple microscopic organisms? Somehow I doubt it. The discovery the world is yearning for isn’t just alien life – it’s intelligent alien life.

Unfortunately, scientists tend to take a bottom-up approach to the search for extraterrestrial intelligence (SETI), too. Much of the effort is focused on detecting radio signals from other star systems. Why radio signals? Because when intelligent life evolved on Earth, radio was the first technology we developed that was capable of broadcasting our presence beyond the Solar System. So radio transmissions are the very first step on the interstellar ladder – another example of bottom-up thinking.

This is really rather narrow-minded – even more than the first “bottom-up” example I gave. In the case of micro-organisms, we know they’ve existed on Earth for something like 3.6 billion years – almost 80 percent of the planet’s lifetime. This suggests that micro-organisms stick around for a long time – long enough for someone out there to notice them. But is that true for radio signals?

I suspect not. We are only fifty-odd years into our own “space age”, and technology is advancing at a headlong rate. It seems highly unlikely that radio communication will still be state-of-the-art hundreds or thousands of years from now. So by extension, any alien species that is hundreds or thousands – or even millions – of years more advanced than ours is going to be using technologies we can’t even dream of.

So instead of trying to guess what futuristic technologies the aliens are using – an impossible task – why not look for the effects of that technology instead? This is what I call the “top-down” approach.

At this point, many people will instantly think of UFOs. But that’s not the subject I really want to talk about here. If the aliens have technology advanced enough to travel to Earth, they’re likely to be able to control exactly what witnesses see (or fail to see) in terms of their presence here. So it’s an inherently unfair situation, and one that virtually precludes rational scientific investigation.

If the aliens stay at home and mind their own business, on the other hand, that’s a different matter. Paradoxically, scientists may be able to detect their presence more easily than if they came here to our own planet. A highly advanced civilization may engage in engineering projects on such a massive scale that their consequences would be visible to observers on Earth.

What sort of engineering projects might aliens be engaged in? The answer depends on where their culture lies on the Kardashev Scale. This hypothetical scale, proposed by Nikolai Kardashev in 1964, relates to the technology level achieved by an advanced civilization. A “Type I” civilization is one that would be capable of tapping the entire energy output of their planet – a stage we ourselves might reach in the next few centuries. A “Type II” civilization, thousands of years further ahead, would be able to exploit the total energy output of a star like the Sun. And millions of years beyond that, there might even be a “Type III” civilization... capable of harnessing energy on a galactic scale. 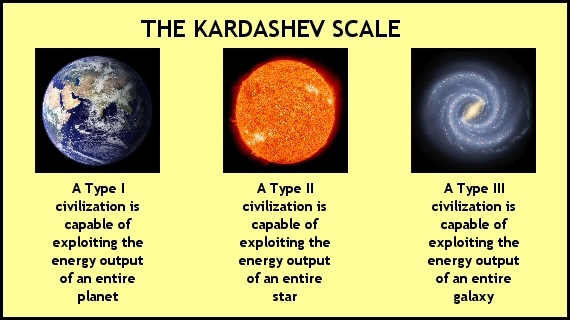 So how do we go about searching for extraterrestrial intelligence “from the top down”?

Let’s start at the bottom end of the Kardashev scale, with an alien civilization at a similar level of technology to ourselves. Have we changed the face of our planet enough for a distant observer to notice the difference? Perhaps we have – on the side that happens to be facing away from the Sun, anyway. The night side of the Earth is covered in artificial illumination emanating from a place that ought to be pitch dark. So maybe the same is true of alien worlds, and that’s something we could look out for. The subject was discussed in a 2011 paper by Abraham Loeb and Edwin L. Turner: “Detection Technique for Artificially-Illuminated Objects in the Outer Solar System and Beyond”.

At a slightly more advanced level of technology, how about asteroid mining? Asteroids offer a plentiful supply of mineral resources, and it’s likely we will be mining them on a systematic basis before the end of the 21st century. Aliens may be mining asteroids already – not in the Solar System, but around their own stars. Such activity might leave clues that are observable from Earth – a prospect that was discussed by Duncan H. Forgan and Martin Elvis in a 2012 paper: “Extrasolar Asteroid Mining as Forensic Evidence for Extraterrestrial Intelligence”.

What about alien spacecraft? I know I said I wasn’t going to get into the subject of UFOs... but UFOs are just a subset of alien spacecraft. They’re the ones that happen to come right here to Earth, where the aliens are likely to make sure that any evidence visible to us is ambiguous and confusing. But what about alien ships that don’t come anywhere near the Earth? It’s probable they would radiate energy in a distinctive way, that can’t be confused with any known astrophysical object. That’s the subject of a paper by Robert Zubrin published in 1995: “Detection of Extraterrestrial Civilizations via the Spectral Signature of Advanced Interstellar Spacecraft”.

A Kardashev Type II civilization is supposedly capable of tapping the entire energy output of a star. One way of achieving this would be to construct a Dyson sphere: a hypothetical megastructure that completely surrounds a star in order to trap all the energy flowing out from it. Astronomers know exactly what a Dyson sphere should look like though a telescope, and several attempts have been made to search for them. A recent effort was reported by Richard A. Carrigan in 2009, in a paper entitled “IRAS-Based Whole-Sky Upper Limit on Dyson Spheres”. The author concluded that “when other stellar signatures that resemble a Dyson sphere are used to eliminate sources that mimic Dyson spheres, very few candidates remain and even these are ambiguous.”

Even further up the Kardashev scale is the Type III civilization, capable of harnessing the energy output – not of a single planet or star – but of an entire galaxy. It’s difficult to imagine what this might entail, but a civilization that is able to move freely through the whole galaxy is likely to be attracted to the most efficient sources of energy that it has to offer. To the best of our present knowledge, that means black hole accretion disks. Among the most plentiful natural sources of such disks are low-mass X-ray binary systems. The idea that such systems might attract advanced civilizations, in order to tap into their supply of readily available energy, was put forward by Clement Vidal in a 2011 paper: “Black Holes: Attractors for Intelligence?” Vidal suggests that anomalies in the energy flow from X-ray binaries might be an indication of alien engineering activity.

Proof That Nothosaurs Put the “Oar” in Dinosaur