The Beast from Space Will Arrive this Week… Seriously

In the last several days, there have been a number of unsettling stories in the news. These range from the eerie and deadly influence of a horrific online meme, to reports of strange, orange illuminations appearing over France that literally had one observer saying, "it's the end of the world."

When we look to the heavens, the threat of some strange celestial death-dealer arriving from deep-space seems all-too real, especially with consideration that recent studies suggest the number of potentially dangerous space objects that graze, or even strike our planet, are higher than once thought.

And just to prove how often gigantic space objects do pass dangerously close to our planet, astronomers have proclaimed the coming of the Beast from space... seriously.

As recently as April 23, astronomers became aware of a massive asteroid, roughly the size of an aircraft carrier, headed toward Earth. But don't panic just yet; this one proves to be another close call, though the object, formally known as HQ124, will be passing a mere three lunar distances from Earth later this week--in fact, by the time you read this, the ancient monster will probably have already come and gone.

Experts assure us that "The Beast" was no danger to Earth life, but the idea that a 1,067-foot-wide hunk of space rock traveling 31,000 miles per hour can creep up on us with only a few week's notice is--and should be--disconcerting (in addition to making us know what a bowling pin must feel like). Nonetheless, such beastly space objects arouse curiosity and thrill, and Thursday a live video stream was made available online for those wishing to track the asteroid's progress. 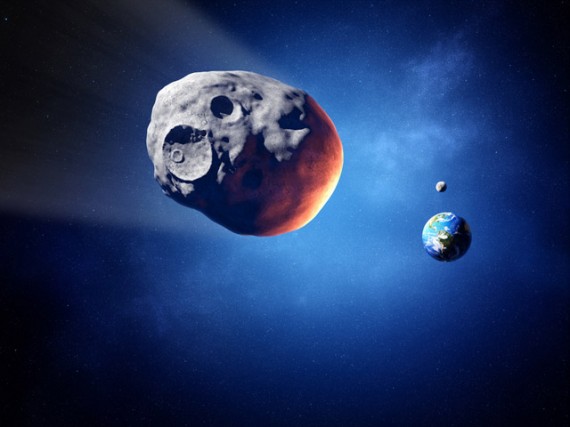 A widely-quoted statement collected by National Geographic, Bob Berman of the web-based astronomy venture Slooh, noted with concern the fact that an object so large should indeed have been detected sooner:

"What's disconcerting is that a rocky/metallic body this large, and coming so very close, should have only first been discovered this soon before its nearest approach. HQ124 is at least 10 times bigger, and possibly 20 times, than the asteroid that injured a thousand people last year in Chelyabinsk, Siberia. If it were to impact us, the energy released would be measured not in kilotons like the atomic bombs that ended World War II, but in H-bomb type megatons."

Which brings to mind another interesting point: it has often been offered that "mutually assured destruction" would be among the more frightening concerns to humanity in the atomic age. The late Carl Sagan drove this point home often in his talks and appearances, as he and others similarly questioned the likelihood of whether an advanced extraterrestrial intelligence might live long enough beyond its own entry into the scientific proficiency required to harness the atom before destroying themselves. But given consideration to the concern that has begun to follow the likelihood that an asteroid might strike Earth and manage to wreak havoc on entire large city populations (or worse), is self-destruction really the very worst of our concerns?

We live in an era where "beasts" from space can appear with sudden, and potentially deadly results; but in truth, that "era" has always existed, along with threats like these that science has merely helped us to identify. Maybe there are greater dangers to humankind than its own destructive tendencies, after all.