2014 marks the 45th anniversary of the Skamania County Sasquatch Refuge. The closest thing to official government recognition the creature has ever had.

The year was 1969. Man achieved its first landing on the moon, The Beatles released Abbey Road, and it became illegal to kill Sasquatch.

Skamania County, Washington is nestled in the center of the Columbia River Gorge, which serves as the dividing line between the states of Washington and Oregon. With towering Douglas Furs, and lush, green wilderness, the people of Skamania County have had a long relationship with the outdoors. With the population in 1969 of just over 5,000, residents of the region often earned their livelihood from the land.

Native American legend of the region tell of hairy, marauding Selahtik Indians, a band of ape like creatures living in the caves along the Cascade Mountain range, murdering and rampaging against all who passed by (often little children). But 1969 was a far cry away from the Indian legends of the past.

The Bigfoot flap of 1969 began in March, when John and Linda Durrell were driving up with their family on a camping trip above Carson, Wa. Nearing their destination, Linda Durrell spotted something of the side of the road. Getting out to take a look, she was surprised to see extraordinarily large footprints in the snow, far larger than any human could have made.

Not quite sure what to do, Linda and family called the local sheriff’s office, who took plaster casts of the footprints for later investigation. They prints measured 22 inches long and 7 ½ inches wide. Investigating the surrounding area, the local deputy found even more footprints. Pictures of the investigation were featured on the front page of The Columbian newspaper, and the Skamania County Pioneer, and the story was picked up by numerous regional news sources. 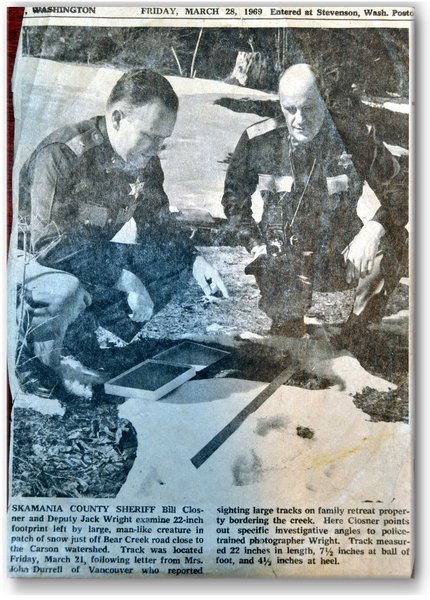 Media attention around the event was spurred even further when local fisherman Don Cox had an early morning encounter with the creature. Driving towards Bonneville Dam early in the morning of March 5, Cox encountered what he first thought to be a tree in the middle of the road. Coming closer, he realized it was a huge creature, standing on hind legs, moving quickly across the highway. He watched the creature move quickly across the road, and leap over a 14-foot high embankment on the other side. Stopping off at a local coffee shop, Cox immediately reported the incident to the authorities. 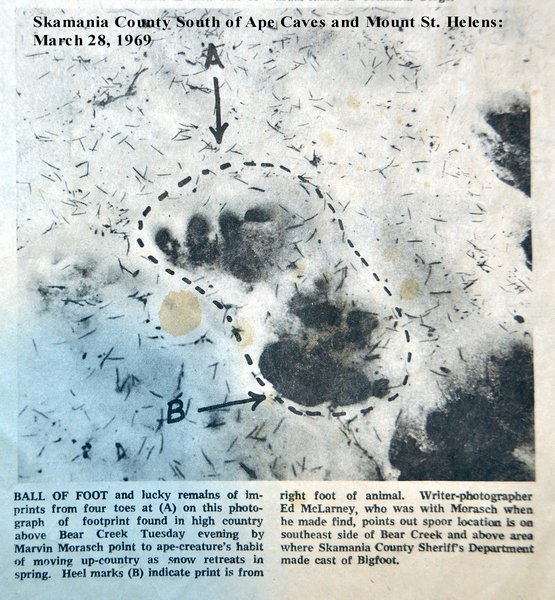 Attention caused by the sightings prompted Skamania County to pass what has become known as The Bigfoot Law, making it a felony to kill Sasquatch. Commissioner Chair Conrad Lundy, Jr., and Prosecuting Attorney Robert Leick signed the ordinance into law. The fact that it was adopted on April 1 did not escape people’s attention.

However, City Commissioners maintained that this wasn’t a gag. “Although this ordinance was adopted on April 1, this is not an April Fool’s Day joke,” Commissioner Lundy told the Skamania County Pioneer at the time, “there is reason to believe that such an animal exists.”

The region was featured prominently in an episode of the 1970’s TV show In Search Of… where the city officials involved maintained the legitimacy of passing such an ordinance. “We didn’t feel that if there was such a creature, and it didn’t do anything to harm anybody, that it didn’t deserve to be harmed or captured.” Said Prosecuting Attorney Robert Leick.

The ordinance was reviewed by the county and redefined in 1984, reducing the penalties from $10,000 or 5 years in jail, to $1,000 or 1 year in jail, but the revisions also declared Sasquatch as an endangered species living in Skamania County. As Prosecuting Attorney Leick summed up, “I think Sasquatches are at least as important as the spotted owl.”

Possessed by a Demonic Ouija Board or Just Bored?