Well, purely coincidentally, after having written an article earlier this week on the unlikely theory that the monsters of Loch Ness are plesiosaurs, here's another article from me on the mysterious beasts of that famous Scottish loch. This one, however, is very different. It addresses the matter of the monster in fiction. One very specific piece of fiction.

While channel-surfing late on Sunday night, I stumbled across an episode of the old 1960s TV series, The Saint. Based on the novels of Leslie Charteris, it starred Roger Moore (in his pre-007 days) as the adventuring sleuth, Simon Templar. I was intrigued to see that the 1966 episode in question was titled The Convenient Monster. I was even more intrigued when I clicked on the summary of the episode. The subject: nothing less than strange and savage deaths at Loch Ness. 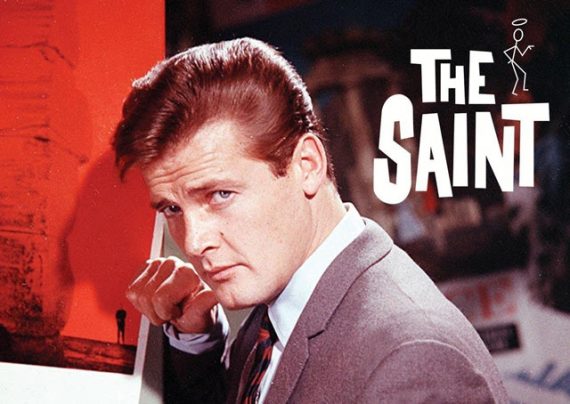 Well, of course, I had to watch it! And I'm pleased I did.

I won't give away the entire plot (and definitely not the ending) but I will say that it will entertain and satisfy fans of cryptozoological fiction and/or whodunnit-style mysteries. Imagine a combination of (A) the excellent, Nessie-themed movie, The Private Life of Sherlock Holmes, and (B) an Agatha Christie-type saga, and you won't be far off.

I should stress, too, that a great deal of research and planning clearly went into the production of the episode, since it makes mention of significant, real-life cases, photographs, film-footage and much more. Even the famous Tim Dinsdale footage (see directly below) gets about a 10-second, on-screen showing.

It all begins when Templar is driving past the huge and mysterious loch.  Like most people who visit Loch Ness, Templar can't resist stopping and taking a look at the expansive body of water. You know: just in case. As Templar scans the waters for something long-necked and humped, he hears a woman scream. Racing to the shore, he's confronted by one Ann Clanraith, a young woman terrified out of her wits.

Hardly surprising, since she has stumbled upon the dead body of her neighbor's dog, which has been viciously mutilated. But that's not all: huge, toed footprints can be seen all around the water's edge. Did a Nessie surface from the depths to slaughter the unfortunate dog? Certainly, that's what we are led to believe. But are things really that clear-cut? Maybe they are. On the other hand, maybe they're not.

Right away, Templar has an eye for Ann, gets into a fight with a local gamekeeper, and runs across a poacher named Willie, who appears to know more about the matter of Nessie than he is willing to admit. In other words, it's all par for the course for an entertaining episode of The Saint. And it isn't long before Templar meets with Noel and Eleanor Bastion, the owners of the dead dog, and also the owners of a huge, old Scottish mansion.

Noel is an author, while Eleanor is a naturalist with a major obsession for the Loch Ness Monster. In no time at all, Eleanor is showing Templar her collection of Nessie artwork, discussing the infamous "Surgeon's Photo," and explaining why she believes the Nessies are plesiosaurs. She is also sure that her dog was killed by a Nessie.

Moving on, it turns out that Ann is Noel's secretary. There is a suggestion that Ann might be much more than that. Namely, Noel's secret lover. Certainly, the atmosphere between Eleanor and Noel is downright frosty. Cue lots of intrigue that Templar does his best to unravel. Then, an Inspector Mackenzie, of the local police, arrives on the scene. He has been out at the loch and confirms the presence of the huge prints on the shore, which he measures as being 17-inches in length.

At the inspector's suggestion, Templar agrees to help with the investigation and receives an invite to stay with the Bastion family, which he accepts. First, however, Templar has to return to the village pub, where he had previously been staying. As he enters the pub, all of the talk is about the monster. A bunch of men are deep in discussion about the beast and the rumors that a couple of swimmers died in the loch, under mysterious circumstances, a few years earlier. It's all very conspiratorial.

In no time at all, there's another development: Willie is found dead at the shore of Loch Ness. His body is battered and torn up, just like that of the dog. And, once again, we see those mysterious tracks everywhere. Mrs. Bastion decides to hold a night-time vigil, in the hope that the beast will return and her research will prove her right that Loch Ness has nothing less than a resident population of plesiosaurs.

We're now into the final stage of the story. It's a stage that sees Templar creeping around a secret tunnel system under the nearby castle (which, although not mentioned by name, is clearly meant to be Loch Ness's famous Urquhart Castle), the local woods blanketed by a thick fog, and the mystery finally resolved. Or is it? Well, as I said at the beginning, I won't give the ending away. But, it's an interesting one that Nessie fans will not be disappointed by.

If you haven't seen The Convenient Monster, and you enjoy cryptozoological fiction, check it out!