The Mysterious Blue Holes of the Bahamas

The island of Andros in the Bahamas is a mystical place. It is a tropical, sun-kissed land of clear blue seas and pristine, white sand beaches. Possessing immense biological and geographical diversity, with a wide range of habitats across an area approximately the size of the state of Delaware, many of which are unique on Earth, Andros is not only a tropical paradise but also a marvel of the natural world. This idyllic island getaway is also a place steeped in mystery, legend, and myth.

The largest of the Bahamas Islands, Andros is actually an archipelago composed of over 700 hundred small islets and cays, all interconnected by a crisscrossing series of pristine, mangrove filled estuaries and expansive tidal swamplands, which amount to a total land area of around 2,300 square miles.

On three sides, Andros is hugged by warm, shallow crystal clear seas that are teeming with an abundance of colorful sea life, some found nowhere else on the planet. The shallow seas move inland into rocky tide pools, tidal estuaries, mud flats, and mangrove swamps, all of which compose different ecosystems that display a staggering amount of biodiversity within such a relatively small area. Andros also sports the world’s third largest barrier reef, enormous freshwater aquifers, and the only freshwater river in all of the Bahamas.

On the eastern side of the island, only a mile offshore, a deep channel known as The Tongue of the Ocean cuts its way past the island, where the seafloor makes a sudden, dizzying drop from shallow coral reefs to abyssal depths of 6,000 feet into the clear blue depths. This deep water trench gives way to yet another ecosystem living side by side with those of the shallow waters, a pelagic eco-zone often frequented by large marine going mammals such as pilot whales and humpback whales, as well as other large, open water fish cruising deep under the tropical, sun flecked surface.

Among all of this stunning biodiversity and wealth of geographical features, perhaps the most mysterious feature of the island is its many enigmatic and beautiful blue holes, which dot the island both in the sea and inland.  Blue holes are steep, roughly circular underwater caves or sinkholes which are also referred to as “vertical caves,” and can descend down to depths of 100 meters (330 feet) to 392 meters (1,286 feet). Blue holes are so named for the dramatic contrast between the dark, azure blue of their depths, and the lighter colored shallows surrounding them, although inland blue holes tend to look more like circular black lakes due mostly to rotting vegetation. 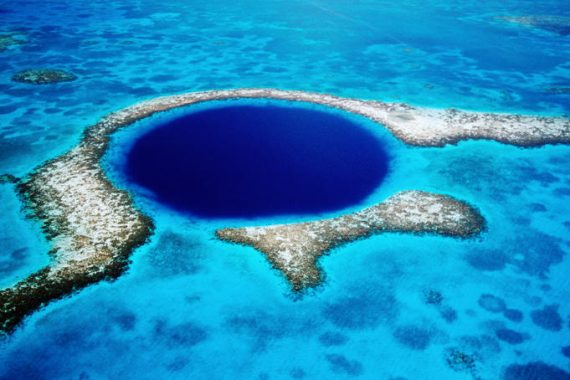 There are estimated to be around 50 of these blue holes scattered throughout the shallows around Andros, and around 175 in the wooded interior of the island, with more being uncovered all of the time. Many of these blue holes branch off into intricate submerged passages and extensive underwater cave systems that can meander in all directions for thousands of feet.

The blue holes of the Bahamas have always held a sense of awe and mystery. Although popular places to dive, it is believed that less than 1% of the blue hole cave systems of the Bahamas have been explored, and it has only been within the last several decades that we have really uncovered any good information on what the holes even are.

The first person to really shed any light on the blue holes of the Bahamas was a Canadian diver by the name of Dr. George Benjamin, who in the 1960s made first an aerial survey of the cave systems and later returned to plunge into their perilous depths and yawning undersea chasms with diving gear. These early explorations marked the beginning of any real scientific inquiry into the nature of the blue holes. 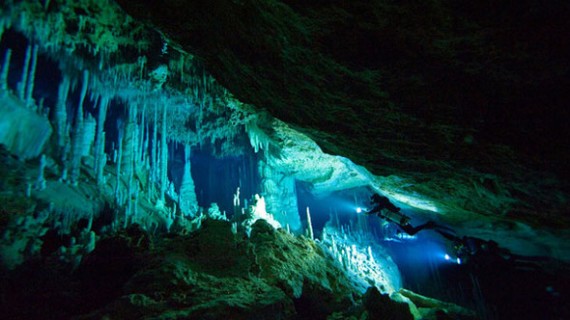 It is from the enchanting blue depths of these mysterious submerged caves that a persistent local legend has sprung. The people of the area have long spoke of an enormous monster said to inhabit the blue holes of the island; a creature known as the Lusca. The Lusca is said to be a gigantic animal that can reach sizes of over 23 meters (75 feet) in length, and to resemble something like a cross between an octopus and a shark, with a plentitude of formidable tentacles and a gaping mouth full of dagger-like teeth.

It is said that this ominous creature lurks deep in the blue hole caves during the day and comes out of its dark lair to hunt at night. Witnesses report that the Lusca will suddenly rise up under an unsuspecting swimmer and simply suck them beneath the waves with shocking speed, leaving nothing but bubbling water behind. Since the monster purportedly drags the hapless prey into craggy underwater caves to feed, the bodies of these victims are never seen again. The Lusca is commonly blamed for missing swimmers and the occasional disappearance of cave divers in the area as well.

Locals insist that the Lusca will target not only swimmers and divers, but boats as well. It is said that Lusca will snatch people off of the decks of boats, and some accounts even speak of whole boats being pulled under, leaving only swirling debris bobbing at the surface. Various disappearances of boats over the years have been deemed to be the work of Lusca. The creature is purportedly so dangerous that it will occasionally even come up and grab victims right off of beaches. Fishermen of the area are extremely wary when passing by blue holes, often cruising past the dark blue chasms silently, as noise is said to attract the aggressive beasts.

Some people have had direct run-ins with the elusive Lusca and lived to tell the tale. In 2005, an underwater photographer reported being attacked by an enormous octopus he described as being about 50 feet long. The terrified diver shoved his camera out in in front of him in a desperate bid to protect himself,  and the monstrous octopus actually snatched the camera away before disappearing into a cave. Another man was swimming near a blue hole around sundown when he was violently yanked underwater. The swimmer managed to pull away and get to the nearby shore, whereupon he reportedly noticed huge sucker marks on his thigh much to his horror.

Another somewhat frightening encounter occurred when a crew of divers actively trying to catch the creature got more than they bargained for. At first, the crew of the boat came to the chilling realization that something large and heavy was pulling on the traps and breaking the lines. This was considered odd enough, but things got scarier when one trap was pulled so hard that the boat actually was dragged along by whatever it was on the other end at a reported speed of one knot. Onboard sonar at the time revealed what was described as a very large, pyramid shaped creature. After the boat was dragged some distance, the line suddenly went slack and the trap was pulled up, where it was quickly ascertained to be dramatically twisted and bent out of shape. The somewhat unsettled crew called it a day and promptly vacated the area. 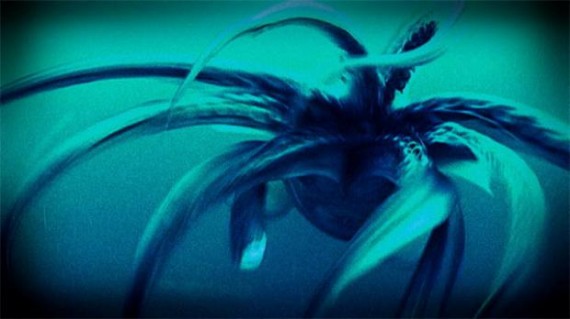 The popular TV show, Destination Truth, sent a team into the Bahamas blue holes in search of evidence of the Lusca and uncovered some unusual activity during their investigation. After diving to a depth of 150 feet into a blue hole, the team came across a huge, gaping opening in the wall. Upon finding this opening, the crew was startled by sonar contact with something huge in the water with the divers. Team leader Josh Gates simultaneously spotted movement from something enormous, which he had first taken to be merely a part of the wall. Although the creature wasn't clearly sighted, the incident was spooky enough for them to pull a panicked Gates from the water with great haste.

Undeterred, Gates decided to make another dive in a different spot, this time going down 175 feet into an underwater cavern. Again the crew got sonar readings of something large moving through the water and once again Gates reportedly saw movement in the murk ahead of him along with ripples and bubbles, although once again he did not get a good look at whatever it was. In addition, FLIR cameras picked up movement from something very big lurking nearby. The situation was frightening enough to convince the crew to turn off the lights on their boat in the fear that they would attract whatever was down there.

Although there was no concrete evidence obtained during the expedition, the team was able to analyze footage they had taken and noticed something that looked rather like a large tentacle. It was speculated what was captured on film was perhaps part of some sort of enormous octopus or squid.

This finding mirrors the widely held belief that if there is such a creature as a Lusca, it is likely some sort of giant octopus or other cephalopod. Interestingly, there have been reports of giant octopuses washing up on shore in the Bahamas. In one case, the remains of a huge octopus were found on a beach on Grand Bahamas Island in 2011. Although only part of the creature was found, it was estimated that the full animal would have been around 30 feet in length. 2011 also saw yet another report of a giant octopus, when a 12 foot long, 135 pound specimen was found floating around offshore by fishermen.

The blue holes are commonly considered a hostile environment for life due to poor water circulation that leads to a severe depletion of oxygen, yet a surprising diversity of life has been found in such places nevertheless. Various types of crab, shrimp, sea worms, and other life forms have been found in blue holes, many of them specially adapted to the conditions there, and large animals such as nurse sharks and sea turtles are sighted there as well. Even if a large predator such as the alleged Lusca did not permanently live in the blue holes, it seems feasible that a large, unknown predator might find enough food resources to entice it to make forays there.

Looking into the seemingly bottomless cobalt depths of the blue holes certainly invites the idea that there are mysteries here that we do not yet fathom. They are certainly eerie places. In addition to their various mysterious and unexplored cave systems, numerous fossils, shipwrecks, and other artifacts have been found at the bottom of blue holes. Various unusual remains of animals have been found here as well, including the bones of a species of crocodile that is not known to live in the Bahamas, the remains of an unknown type of bird, and even human bones, all perfectly preserved due to the low oxygen environment. All of this is certainly odd, but is there something even stranger to be found here amongst these mysteries?

With such a small fraction of them explored, there are likely new species and other wonders waiting to be discovered within the mysterious blue holes of the Bahamas. Is there perhaps some sort of unknown giant predator stalking these majestic places as well? Perhaps as divers continue to push further into these unexplored underwater cave systems we will shed some light on this enigma.

For now the blue holes of the Bahamas keep their mysteries wrapped tight within their inscrutable azure depths.