The Mysterious Man-Eating Dune of Indiana

Mother Nature can be a truly frightening force to be reckoned with. With very little effort, our sturdiest constructions, the pinnacle of all of our technological know-how can be dashed to pieces by her wrath. She can also confound us with her inscrutable mysteries, leaving us with no clue of how or why she was able to inflict her deadly touch. Such is the story of the dangerous roving dune of Indiana, a mysterious wandering behemoth with the potential to swallow people without warning and with no known reason.

Mt. Baldy is an enormous sand dune located at Indiana Dunes National Lakeshore, a 15,000 acre national park which lies along the long coastline of Lake Michigan, a place so renowned for its beaches that it is sometimes referred to as America's Fourth Coast. The park is well known for its sand dunes, but in particular for the monstrous Mt. Baldy, which at 123 feet high is the largest sand dune on the southern shore of Lake Michigan. The dune is popular among hikers, who climb to the top for picturesque view of Lake Michigan, as well as a well-known spot for sunbathing. Around the dune itself are numerous hiking trails and a popular birdwatching spot called Cowles Bog. The nearby beach is very famous for its swimming, drawing visitors from all over the U.S. 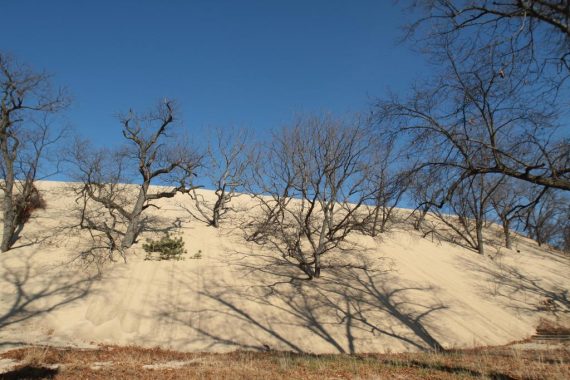 Mt. Baldy is what is known as a "wandering dune," sometimes known as a "living dune," which means that it  shift and moves over time. In the case of Mt. Baldy, the dune has a normal speed of 5 to 7 feet per year, but due to erosion and loss of vegetation caused by the large number of visitors, it's speed has increased considerably to a disturbing 10 to 20 feet per year just within the last decade. This still might not seem particularly fast, but it is shockingly fast for this type of dune, and with a hulking, unstoppable mountain of sand there is not much to do but get out of its way as it inches ever closer. Wandering dunes such as Mt. Baldy are known to swallow up trees, boulders, cars, and even buildings.

Mt. Baldy's mystery lies not in the fact that it moves or that it moves so fast, but rather in the unique geological enigma it has presented in recent years. The story starts when a young boy was suddenly and inexplicably swallowed by the dune. 6-year-old Nathan Woessner of Sterling, Ill., was walking along the dune one day in July, 2013 when without warning he disappeared into a hole that abruptly opened under him like a mouth belonging to the dune itself. People nearby were alerted by the boy's screams and ran to find that he had been completely engulfed by the dune. By the time rescuers arrived, the boy was buried underneath 11 feet of sediment. A desperate battle to free the boy from the clutches of the dune ensued, and finally, after an 11 hour ordeal, the boy was pulled from his sand prison alive.

Geoscientists at first were doubtful of the story, as it is not known for such holes to open up in sand dunes since they are made up of grains of sand and thus have no room for air. In addition, there is no water flowing beneath them to account for holes of this nature. Yet, to the bafflement of experts, more holes began to appear in the ensuing months. Other stories began to emerge of other visitors encountering the holes as well. Hikers walking Mt. Baldy told of suddenly having the ground open up beneath their feet and causing them to trip or become stuck. Luckily, the holes in these cases did not exceed more than 5 feet in depth, and the incidents caused no fatalities. Nevertheless, it certainly seemed that the dune was a place of potential danger and that it was only a matter of time before someone was seriously injured or worse.

The holes were mostly around a foot in diameter and seemed to appear and vanish without warning, with most opening for only a day before closing up as if they had never been there. Concern over these mysterious holes prompted the Environmental Protection Agency to conduct a survey using ground-penetrating radar, which uncovered 66 anomalous spots under the dune. However, due to the fleeting nature of the holes, it has been difficult to properly study them or even form a link between the anomalies and the holes themselves.

Although many of the appearing and disappearing holes have been identified, no one is sure where they come from. The phenomenon has baffled scientists, who have studied the sediment, analyzed wind patterns, and mapped terrain in the area yet still are mystified as to what is causing the anomalous and potentially dangerous holes to form. Geologist Erin Argyilan, one of the many dedicated researchers of the mystery of Mt. Baldy, has stated that the holes represent a new geological phenomenon. Argyilan explained that the holes in Mount Baldy are distinct from the usual sink-holes that make the news for swallowing houses and cars, since those usually develop when rock surfaces dissolve over time due to water damage.

For the time being, the mysterious holes pose a threat to the thousands of visitors that come to see the dune every year. In order to ensure public safety and make sure the huge, rogue dune claims no more victims, the National Park service has closed access to Mt. Baldy and barred entry to the immediate vicinity until more is understood about what is going on. Various signs and fences have been installed to turn people away, and rangers are conducting patrols to enforce the measures. In the meantime, it is hoped that erosion can be somewhat controlled by planting marram grass on the dune, the roots of which hold sand together. 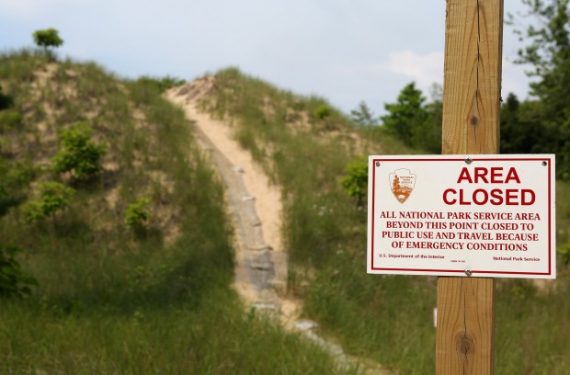 Researchers plan to continue to monitor and study the mysterious holes of this monstrous, rogue dune but for now there are only hypotheses. One idea is that buried trees decaying beneath the sand might account for the holes. Mt. Baldy's rate of movement has increased at an alarming rate in recent years due to corrosion caused by a loss of vegetation on its slopes due to human activity. Historical mining of sand to make glass may have also contributed to the erosion. This alarming increase in speed is speculated to have caused the dune to engulf trees or other structures under its sands, after which they rot, become unstable, and cause the holes to spontaneously form.

Theories such as this may help us to come to an understanding as to why this enormous dune is trying to swallow people alive, but as of yet it is all speculation. Until we have some answers the ominous Mt. Baldy will hold on to its mysteries as it continues its slow, inexorable march across the land, devouring all in its path.