The Other Roswell Mystery

There’s one Roswell mystery that everyone knows about. Just what was it that crash-landed there some time around the start of July 1947? Was it a spacecraft from another planet, or something more mundane such as a weather balloon or experimental military aircraft? If the first explanation is correct, the implications for life on Earth are truly staggering. So Roswell isn’t just any mystery – it’s potentially one of the greatest mysteries in human history. And that brings us to “the other Roswell mystery”: Why was such a momentous event all but ignored for three decades?

The crash-landing of an unidentified flying object would be big news whenever it happened. That was certainly the case on July 8th, 1947 – just weeks after Kenneth Arnold’s sighting led to the coining of the term “flying saucer”. The Roswell incident wasn’t hidden away on the inside pages; it was splashed all over the headlines. A press release from the local army air base appeared in the local newspaper, and the story was soon being carried around the world by radio stations as well as papers as prestigious as the Times of London.

The press release didn’t pull any punches: “The many rumors regarding the flying disk became a reality yesterday when the intelligence officer of the 509th Bomb Group of the Eighth Air Force, Roswell Army Air Field, was fortunate enough to gain possession of a disk... The flying object landed on a ranch near Roswell sometime last week.”

The next day the order came to kill the story. The press release was hastily retracted, and the wreckage was dismissed as merely a weather balloon. From that point onwards, no-one seems to have written anything about the Roswell incident until Stanton Friedman started to investigate the case in the late 1970s. The first book on the subject, by Berlitz and Moore, appeared in 1980.

In other words, almost everything you’ve ever read about Roswell came into the public domain more than thirty years after the incident itself. Even that jaw-dropping press release and its subsequent retraction were never mentioned. It’s as if the world was turning a blind eye to the elephant in the room.

To make the situation even more extraordinary, those three decades were the biggest decades in the history of ufology. “Outer space” was much bigger news then than it is today. The 1950s were the heyday of flying saucer B-movies. The 1960s saw the race to the Moon and the Apollo landings. The 1970s heralded the dawn of the big-budget sci-fi blockbuster. UFO books abounded during these decades. They mentioned Kenneth Arnold and George Adamski and Thomas Mantell and the Maury Island Incident. But they never mentioned Roswell. 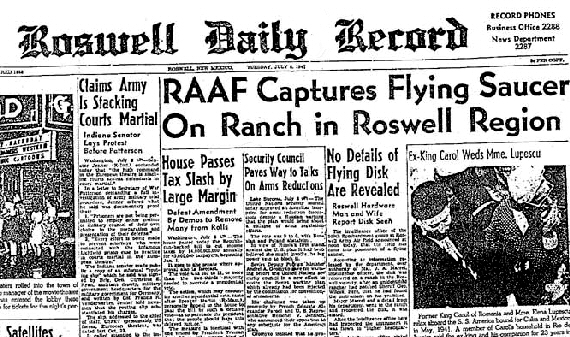 I can’t be sure about this, of course – it’s the old problem of not being able to prove a negative. But in recent years I’ve collected quite a few battered old UFO books from the 1950s, and the Roswell incident doesn’t feature in any of them. I grew up during the 1960s and 70s, and I’m sure I never came across any mention of Roswell. I’m happy to be proved wrong, but even if a reference does turn up I suspect it will be pretty brief and obscure. The closest thing I’ve come across so far is described by David Clarke and Andy Roberts in their book Flying Saucerers. Apparently the first issue of Flying Saucer Review, which appeared in Spring 1955, included a remark by a TV personality of the day referring to a UFO-related news item he’d heard on the radio several years earlier. In retrospect this was almost certainly the Roswell story, although he couldn’t remember the details and said his subsequent inquiries “drew a blank”.

How can a story as big as Roswell just disappear? It was in the public domain, after all, and it was in the public interest, yet no-one ever mentioned it. There’s one obvious explanation – at least as far as military witnesses and the mainstream press are concerned: National Security. People may roll their eyes when they hear that phrase in these cynical times, but back in 1947 things were different. The Second World War had ended only two years earlier – and that was a real war against a real enemy. People could still remember wartime slogans like “Loose Talk Costs Lives”.

Roswell wasn’t just a random place on the map. It was the most security-sensitive location on the planet. The Second World War came to an end when the U.S. dropped atomic bombs on Hiroshima and Nagasaki – the most destructive weapons ever deployed in anger. The bombs were delivered by aircraft of the 509th Group flying from Tinian island in the Pacific. After the war the 509th came back home... to Roswell Army Air Field in New Mexico. It’s easy enough to see why, when ordered to do so, even the most enterprising journalist might be inclined to keep his or her mouth shut.

But what about ordinary people? Thousands, if not millions, of people must have seen those newspaper headlines or heard the reports on the radio. UFOs were a hot topic that everyone was talking about. Admittedly the story had been retracted the following day, but not everyone is going to believe the retraction... especially when the original story was so earth-shattering. It’s commonly assumed (not always correctly) that the earliest versions of a breaking news story are the most accurate – before the spin and disinformation has had a chance to kick in.

Why didn’t someone, when watching a flying saucer movie or browsing through a UFO magazine, suddenly remember that headline from 1947 and decide to tell the world about it? There’s a popular misconception that people who write about the UFO subject make large sums of money out of it. Why did no-one ever decide to “cash in” on the Roswell story during the 50s, 60s or 70s?

I can think of one possible explanation, but it doesn’t really hold water. In the days before the internet, you couldn’t just post information on your Facebook page or an online forum. You had to go through some kind of middle-man, whether that was a publisher, magazine editor, journalist or TV executive. And maybe all the middle-men had signed non-disclosure agreements on the subject of Roswell.

But as I said, that’s not going to hold water. There have always been local UFO groups and privately circulated newsletters which would have allowed the information to filter out to a wider audience. And when Berlitz and Moore eventually wrote their book on the subject, there doesn’t seem to have been any immediate effort to suppress it.

So the “other Roswell mystery” – the way the incident managed to drop off the world’s radar for thirty years – remains a mystery, and a baffling one. What’s more, it’s a mystery that many people are blissfully unaware of. I keep coming across online articles and TV documentaries that say things like “the public’s fascination with UFOs can be traced back to the Roswell incident of 1947”. That’s neat and logical, but it’s not true.