There’s something about kids, little boys in particular, but girls too; something in their little minds that drives them to dig.  Digging holes is a favourite pastime of many kids the world over.  Digging in the sand on a sunny beach.  Digging in the dirt of a farmer’s field.  Digging in the playground at the park, likely with their parent or caregiver asking them not to the whole time.

Why do we dig?  I’m sure some superstar psychologist somewhere has the answer, and it probably relates to some obscure survivalist feature of our evolution.  But whether it’s a throwback to our prehistoric behaviour or some weird advent of modern culture, it can hardly be denied that we like to dig.

I once dug a hole so deep I could sit in it and not be seen from the surface.  I was industrious as a kid.  Of course, my memory of that incident may have exaggerated the size of the hole, which in reality was probably only a few inches deep, but to me, at the time, I was halfway to China.  And I’m certain there are many people who have similar stories. 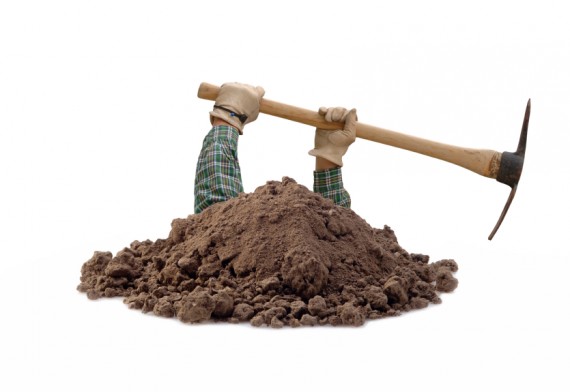 In the vein of digging, have you ever wondered how deep mankind has ever dug?

So, as you can see, we’ve dug down to a depth that is equivalent to heights venerated by aviation enthusiasts and mountaineers.  And we dug almost halfway to the next geologic layer, the mantle

Now to the question…why did we dig that deep?

That official depth noted above, comes from the Russian Oil and Gas industry (of course), who, through the joint projects Sakhalin-I and Sakhalin-II, have dug the deepest hole in the history of mankind, reaching the depth of 12,345 meters in 2011.  Before that, the record was held by the Al Shaheen oil well in Qatar (12,289 meters) in 2008.  And before that it was the Kola Superdeep Borehole in Russia (12,262 meters), which began in 1970.

Unlike the oil drilling, the Kola Borehole – situated in the Pechengsky District of the Kola Peninsula in the far northwest of Russia – was a purely scientific endeavour, undertaken to observe tectonic formations at depth, all in an effort to understand crust stratification and tectonic mechanics.  The Kola Superdeep Borehole (KSB) is actually a collection of several boreholes drilled off of a central hole.  One of those branching boreholes, SG-3, was the record holder, and remains the holder of the deepest artificial point on Earth title (which is influenced by the relatively low elevation of the region in general).  The KSB was capped off in 2005, and the site was abandoned due to a lack of funding in 2008.

You may have heard of the KSB, though perhaps not by name.  It has been the focus of a rather pernicious urban legend in recent years.  It was said by some, as early as 1989, that the drilling crew and researchers were so ambitious in their digging, that they actually breached the gates of hell (or at least knocked on them with their drill).  I hope I don’t need to point out how utterly ridiculous that idea is, but in case I do, it should be known that the entire notion has been thoroughly debunked, and all of the related claims are patently untrue.

When you think about those boreholes, it’s difficult to wrap your head around the conditions you might face at 12,000 meters below the planet’s surface.  During the drilling, researchers encountered temperatures in excess of 600 degrees Fahrenheit.  They hit pockets of boiling hydrogen, and pulled up rock samples greater than 2.8 billion years old.  Those are fairly extreme conditions, and many since have wondered what it smelled like, and even what it sounds like that far away from the surface.  And thanks to one such curious mind, we now know what songs the Earth sings in her heart.

Dutch multimedia artist Lotte Geeven embarked on a mission in conjunction with National Geographic, and with the help of scientists and an acoustical engineer from Arup.  Geeven and his team plunged sensitive recording equipment into the depths of the Earth at the KTB Borehole (Kontinentales Tiefbohrprogramm der Bundesrepublik Deutschland, or the German Continental Deep Drilling Program) located in southern Germany, which is currently the deepest accessible hole in the world, and the resulting recording is actually sort of anti-climactic.

As you can see from the video (below), there was plenty of low frequency vibration, which is often outside of our (human) audio range, and isn’t exactly unexpected.  The recording offers several faint pops and crackles, and a little rumbling.  If you were expecting to hear demons, or the crackling of hellfire, or perhaps the endless screams of the damned, I’m sorry to have let you down (and might I suggest you seek counselling).  Though if you think about it, the sounds Geeven recorded are pretty much exactly what we should expect in such an isolated and geologically insulated area.

Geeven isn’t alone in this endeavour though.  There are several other artists and scientists recording the sounds of deep-Earth both for research and for posterity.

The US Geological Survey (USGS) has long maintained records of earthquake sounds, and actually hosts a website where you can download and remix seismic recordings.  There’s also the somewhat morbid recordings offered by sound artist Mark Bain of the seismic noises made deep underground in New York City on 9/11 as the buildings fell.

So, while our imaginations will have to suffice for answering the title question of this post, at least our scientific curiosity has been sated by the efforts of geologists, deep drillers and artists, all working in collusion to expose whatever it is that lies beneath our feet.