There is often talk of what humankind's discussions with alien beings might be like in the event that an extraterrestrial civilization were successfully contacted. And yet, despite this, there are those among us who have been sending their own personal messages to aliens for years.

Whether extraterrestrials ever actually received them is a different matter altogether, though one thing is clear: we do know where some of the messages may have ended up.

Twelve miles away from the infamous Area 51 facility near Groom Lake, Nevada, amidst an otherwise empty and featureless stretch of highway stands a pair of white mailboxes. Mounted together on a single post, the battered containers are fitted with locks, and covered with stickers, scribblings, and graffiti of all kinds. 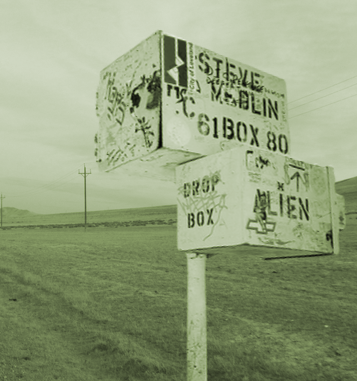 Each of the boxes bears a name: the larger of the two has the words "Steve Medlin" written in bold black letters, and the one beneath it boasting an even simpler and recognizable term: "ALIEN."

The mailbox, while existing in close proximity to Area 51, does in fact belong to a real-life person named Steve Medlin Thus, no mail delivered here is received by any of the four or five species of extraterrestrial visitors presumed by some to be living in an underground complex below the base.

According to Slate, Medlin, rather than being a go-between for the secret government, is a rancher who has lived nearby since the early 70s:

"He and his wife Glenda moved to a 900-square-mile cattle ranch in Tikaboo Valley in 1973. That was 16 years before Bob Lazar appeared on television claiming that the Air Force base near the ranch,  known unofficially as Area 51, was hiding alien spacecraft that crashed in the desert."

Interestingly, during a recent visit to the site in July of 2014, YouTube user Wayne Lindberg and his wife managed to speak with a postal service worker named Trish, an employee with the nearby Alamo, Nevada, Post Office, who provided some of the most up-to-date information about the famous, and at times unfortunate, mailbox:

"People have told me I should write a book," Trish explained.

"The lower box is the alien box, if you wanna send aliens letters," she says, noting that vandalism to the mailbox over the years had caused Mr. Medlin to have to build the white casing around his box--which was originally black--along with the addition of the smaller box for people's "alien" mail.

Along with letters from alien admirers, the Medlins, who added the box in 1997 (the same year the roadway it stands next to was dubbed the "Extraterrestrial Highway") say that some folks who visit drop money in the box. In truth, the occasional tokens are probably little consolation when compared with the damage inflicted on the box over the years, which at one time included the post it was mounted on being completely uprooted and tossed by the roadside (technically, this constitutes vandalism of federal property, which can warrant rather severe penalties).

Arguably, Mr. Medlin should be commended for being light-hearted enough to add a box just for alien letters, rather than a surveillance camera, booby-traps, or other contraptions aimed at dissuading visitors from destroying his mailbox.

The video Wayne provides above was sent along to Jim Harold, who will discuss this with me on the weekly Paranormal Report, a video series available on Youtube. If you have alien mail you'd like to send along in the meantime, send it along by emailing me here.

Cryptids of the Caribbean, Part 2: The Bahamas