Einstein’s name evokes a strong visceral reaction in certain quarters – mainly among ufologists, sci-fi fans and others with a vested interest in interstellar travel. It’s not too difficult to see why. If there’s one thing people hate it’s being told flatly that “you can’t do that”... and that’s exactly what Einstein said about traveling faster than light. 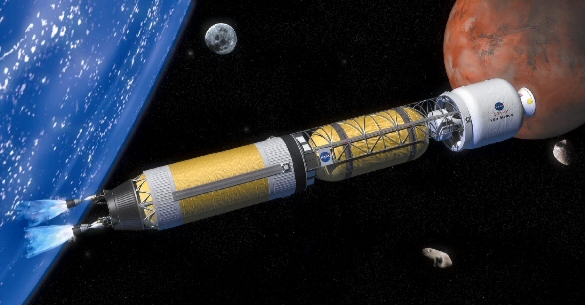 Some amateur scientists are prepared to put years of effort into proving Einstein wrong. But such efforts are ultimately misguided, because Einstein’s injunction again faster-than-light travel isn’t the real problem. If it was revoked tomorrow, a journey to the stars would face just the same practical obstacles that it does today. And when a way round those obstacles is found, it probably won’t involve traveling faster than light.

The basic problem of traveling from A to B is to cover the required distance in as short a time as possible. Distance divided by time equals speed, so the higher the speed the shorter the travel time over a given distance. That’s why people usually focus on “maximum speed” as the limiting factor. But there are other, more subtle, things you need to take into account as well.

Acceleration is the rate of change of speed. In everyday terms, that’s like a car’s “zero to sixty” time. A high performance car that can do 0–60 in five seconds has twice the acceleration of a car with a 0–60 time of ten seconds. And you’d know the difference, because you’d feel a stronger force pushing you back in your seat. This is often expressed in terms of “g-force” – the amount of force that gravity exerts at the Earth’s surface. A force of 1g is roughly equivalent to a 0–60 time of 2.7 seconds.

The higher the g-force, the more uncomfortable it is. Astronauts typically experience an acceleration of 3g during launch – but that only lasts a few minutes. For a space voyage of weeks or months, a practical limit for an ordinary human being is more likely to be 1g. And you’d have to keep it up for a year to get anywhere near the speed of light.

But could you keep a 1g acceleration going for a year? In accordance with Newton’s second law of motion, you have to apply a force to an object in order to accelerate it. This introduces two further complications – energy and reaction mass. According to one estimate, a practical trip to Alpha Centauri would require a hundred times as much energy as all the Earth’s power stations produce in a year. And that’s not all. The principle of the conservation of momentum means that reaction mass is also needed – rocket exhaust, in other words – which either has to be carried along from the start, or somehow picked up from the near-vacuum of space.

Outside the realm of science fiction, spacecraft designers have to grapple with mundane issues like acceleration, energy and reaction mass long before they can tackle the light-speed barrier. The fastest-moving spacecraft to date is NASA’s Juno mission, which peaked at 25 miles per second on its way to Jupiter. Yet that’s only 0.13 thousandths of the speed of light. It would take 30,000 years to reach Alpha Centauri at that rate.

The point I’m trying to make is that the biggest obstacle to interstellar travel isn’t Einstein’s theory of relativity, it’s Newton’s laws of motion. The essence of Newtonian dynamics is that you have to push on an object in order to make it go faster. And the more massive the object, the harder you have to push it. That’s why most scientists believe Einstein is correct when he says “nothing can travel faster than light”... because photons of light are massless particles. As a consequence there’s nothing preventing them from traveling at the maximum speed allowed by the geometry of spacetime. Any object that has mass, such as a spacecraft, must necessarily travel slower than light... if it travels by the same route.

“If it travels by the same route” – that’s the small-print clause that holds out a glimmer of hope for the future. What if you travel by a different, shorter, route? That’s the idea behind concepts such as wormholes and Miguel Alcubierre’s warp drive. By distorting the fabric of spacetime, you make the distance between A and B shorter than it was to start with. Even if you travel at sub-light speed, you arrive at your destination in a relatively short time because you took a short cut. That doesn’t mean you’ve beaten Einstein, though. A photon of light would still get there before you did, if it took the same short cut.

UFOs, Invisibility, and a Weird Book