Elephant Weeps “Tears of Joy” Upon Release from 50-Year Bondage

You may have heard about "crocodile tears," but it's hardly the most famous anthropomorphism associated with elephants.

Yet, despite their apparent prowess in the realm of memory, the tears shed by our long-trunked animal friends may in fact be real also, though not as cold as those appended to their crocodilian kindred. In fact, new research may suggest that, like humans, they cry in association with times of stress, or even joy.

A recent example--and a very striking one--involves the story of Raju, an elephant who was freed from a five decade captivity under a drug dealer in Uttar Pradesh, India. As reported by the International Business Times, as Raju's saviors appeared during a late-night rescue operation, the elephant appeared to sense that its rescue was imminent:

"We stood our ground and refused to back down – and as we did so, tears began to roll down Raju's face. Some no doubt were due to the pain being inflicted by the chains, but he also seemed to sense that change was coming.

"It was as if he felt hope for the first time in a very long time."

The incredible story has prompted questions over whether Raju had indeed felt the pains of slavery in purely the physical sense, or if there were in fact a emotional response his rescuers witnessed just as well.

In 2011, a similar story involved an infant elephant which purportedly cried for five hours because its mother, after trying to kill it, rejected the newborn. Widely-cited in the debate over elephant tears and their causes, an article at Live Science seems to indeed suggest that there is an emotional component to the mystery, but not only with regard to elephants:

[W]hile scientists are not 100-percent certain, solid scientific research supports the view that elephants and other nonhuman animals weep as part of an emotional response. Rather than dismissing this possibility as merely storytelling, we need to study it in more detail. After all, "the plural of anecdote is data" and stories and citizen science can and should motivate rigorous scientific research. And, let's not forget that many "surprises" have been discovered in the emotional lives of animals, including laughing rats and dogs and empathic chickens, mice and rats — all published in outstanding peer-reviewed professional journals.

Perhaps the discussion shouldn't be limited just to animalia, however. For decades, beginning with Cleve Backster and his polygraph experiments that led to what he believed were the "screams" of plants when they were being harmed, evidence has continued to emerge which does indicate a certain communicative ability that plants possess. 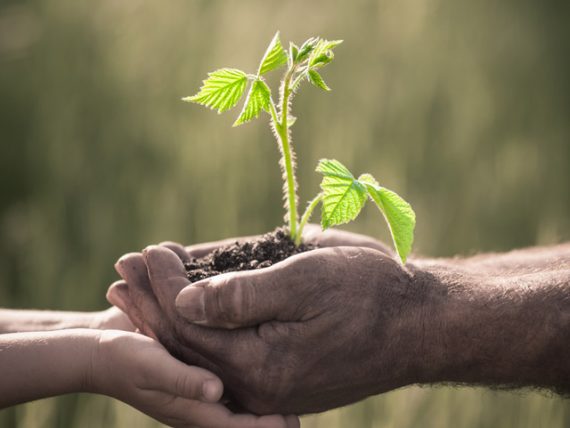 Namely, plants appear to produce gases when parts of their stems and leaves are cut, which warn nearby plants that they are being harmed. This process causes the production of substances in the nearby plants which can thus ward off insects. Further expanding on the discovery, a recent analysis showed that plants are able to do this through "hearing" the insect or other consumer in question, utilizing vibration that travels along the plant's stems.

Despite the apparent presence of primitive communication plants use to protect themselves, we might not be able to go so far as to say that this alone is evidence of consciousness, let alone emotions or fear. But coming back to our mammalian neighbors around the world, it may not be so hard to believe that animals could express human-like emotions through physical displays like crying... especially if we step far enough away into an objective space to see that, rather than being "human" things, perhaps these kinds of displays are merely actions made by living things, some of which we simply have more in common with than others.