It’s All the Buzz: The Real Story Behind Buzz Aldrin’s “UFO”

For years there have been stories of astronauts who have purportedly observed unidentified objects while in Earth orbit, or even en route to the Moon. Most recently, Buzz Aldrin, second man to walk on the moon during his mission with Neil Armstrong and Michael Collins aboard Apollo 11 in July of 1969, has drawn public attention for discussing a purported UFO that was seen during the mission.

The story goes that Aldrin and the other crew aboard Apollo 11 had discarded the first and second stages of the rocket carrying them toward the Moon. The third stage, the S4B, was the final lift to thrust them even further outward, reaching speeds close to 7,000 mph, to begin circling Earth.

Two days after discarding the S4B, Aldrin and the crew aboard Apollo 11 became aware of a bright light nearby, which they considered might have been the rocket they had discarded. Back at Mission Control, radio operators received the now famous and controversial message from the Apollo 11 crew:

"Do you have any idea where the S4B is with respect to us?"

"There was something out there that was close enough to be observed," Aldrin later would recall of the circumstance. "What could it be?" He went on to tell of the events as the unfolded:

"Mike (Collins) decided he thought he could see it in the telescope, and he was able to do that. When it was in one position, it had a series of ellipses, but when you [focused the telescope] real sharp, it was sort of L-shaped. That didn't tell us very much."

"Now obviously, the three of us were not gonna blurt out, 'hey Houston, we got something moving alongside of us, and we don't know what it is! Can you tell us what it is?' We weren't about to do that, because we knew those transmissions would be heard by all sorts of people. Who knows what somebody would have demanded; that we turn back because of aliens, or whatever the reason is. So we didn't do that, but we did decide that we would just cautiously ask Houston, 'where was the S4B?' "

It was, of course, determined that the rocket in question had been approximately 6000 nautical miles from the position of Apollo 11 at that time. Thus, the object they observed, obviously not the S4B, remained unidentified. 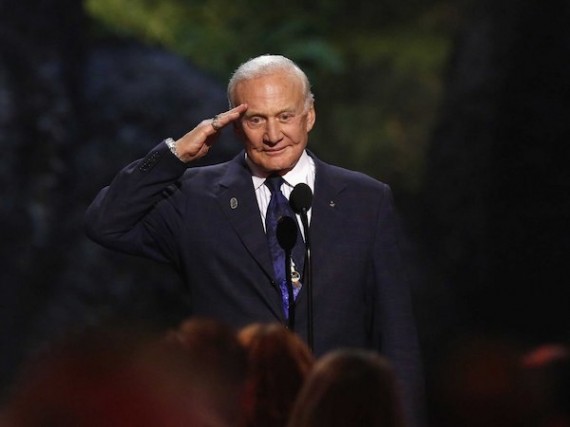 So the question is, does what Aldrin says of these circumstances remain consistent with his more recent statements about what he and the crew saw? For reference, here's the relevant text from Buzz's recent Reddit AMA, which discussed the same object recounted above:

Q: Do you believe in aliens and what are the sightings you saw aboard Apollo 11?

A: On Apollo 11 in route to the Moon, I observed a light out the window that appeared to be moving alongside us. There were many explanations of what that could be, other than another spacecraft from another country or another world – it was either the rocket we had separated from, or the 4 panels that moved away when we extracted the lander from the rocket and we were nose to nose with the two spacecraft. So in the close vicinity, moving away, were 4 panels. And i feel absolutely convinced that we were looking at the sun reflected off of one of these panels. Which one? I don’t know. So technically, the definition could be “unidentified.”

We well understood exactly what that was. And when we returned, we debriefed and explained exactly what we had observed. And I felt that this had been distributed to the outside world, the outside audience, and apparently it wasn’t, and so many years later, I had the time in an interview to disclose these observations, on another country’s television network. And the UFO people in the United States were very very angry with me, that i had not given them the information. It was not an alien. Extraordinary observations require extraordinary evidence. That’s what Carl Sagan said. There may be aliens in our Milky Way galaxy, and there are billions of other galaxies. The probability is almost CERTAIN that there is life somewhere in space. It was not that remarkable, that special, that unusual, that life here on earth evolved gradually, slowly, to where we are today.
But the distances involved in where some evidence of life may be, they may be hundreds of light years away.

In truth, while some have decried the statement as a fairly "typical" response an astronaut might release with regard to such a story, Aldrin does seem to maintain consistency between retellings of the events which transpired. It is also fairly clear that certain television documentaries (like the excerpt below) which have featured Aldrin have taken great liberties with the way the story was told, posing the statements in such a way that, when edited together, might make it seem like the circumstances aboard Apollo 11 had been more mysterious than they actually had been at the time:

Aldrin's description of something "L-shaped," on the other hand, would probably match the angular orientation of one of the four panels described in his statement above; thus, logic would dictate that this had been the most probable source for the mysterious object he and his crew aboard Apollo 11 witnessed.

Granted, we shouldn't use this as evidence against UFO sightings in general (as so many in the media have recently attempted to do), or even to bolster the idea that astronauts have never seen anything unusual while in space. Let's not forget some of Gordon Cooper's interesting stories about UFOs, which included a story about "a little saucer" that landed in a dry lake bed at Edwards Air Force Base, which he had been alerted about:

Cooper certainly seems to be willing to seriously discuss the idea of a "saucer" craft and its aerodynamic abilities with regard to moving through space, and traversing Earth's atmosphere (though his remarks about UFOs in his biography, published some years later, was slightly more dismissive of the UFO discussion). It is indeed interesting that this would be the case, considering he had approached the United Nations about trying to encourage the formation of a committee that would explore what Cooper, in his letter to the UN, described as "extraterrestrial vehicles."

Quite obviously, astronauts have at times taken the UFO question quite seriously, whether or not what Buzz Aldrin saw was anything of particular importance during the Apollo 11 mission. For more information on possible observations of unidentified aerial objects by astronauts, those interested can look at this website.

NASA Confirms that Voyager 1 Has Left the Building