You’ll never gain mystical insight by perusing a book, or by looking through a microscope in a laboratory. But what about the opposite? Is it possible to use mystical techniques to obtain knowledge about mundane subjects like science or history? Can you pluck hard, objective facts out of thin air? Some people, at least, believe that you can.

One of the most ambitious exercises in what might be termed “intuitive science” was undertaken by Annie Besant and other members of the Theosophical Society early in the 20th century. The first edition of their book, Occult Chemistry: Investigations by Clairvoyant Magnification into the Structure of the Atoms of the Periodic Table and Some Compounds, was published in 1908. At that time, mainstream scientists knew almost nothing about subatomic structure. The Theosophists, on the other hand, believed they could peer inside the atom using mental effort alone.

The results of their research can be read online. As far as specific details are concerned, few of these results can be said to have stood the test of time. In qualitative terms, however, many of their diagrams look far more like quantum mechanical wavefunctions – the formalism that modern physicists use to represent atomic structure – than anything you might have found in a mainstream science book in 1908.

According to Besant and her co-authors, all atoms are made up of still smaller units until you reach the “ultimate physical atom”, which comes in just two varieties. They label these “male” and “female”... but if they’d used the terms “up” and “down” instead, the analogy to quarks would be even more striking. Coincidence, or premonition of scientific discoveries to come? The same thought comes to mind when you look at their sketch drawing of the “ultimate physical atoms”. There’s a definite resemblance to the double helix structure of the DNA molecule – which of course was completely unknown at the time.

Another molecule with a distinctive shape is benzene, the ring-shaped form of which was discovered by the German scientist August Kekulé in 1865. Much later, he claimed the discovery was the result of a visionary dream:

Again the atoms were gambolling before my eyes. This time the smaller groups kept modestly in the background. My mental eye, rendered more acute by the repeated visions of the kind, could now distinguish larger structures of manifold confirmation: long rows, sometimes more closely fitted together, all twining and twisting in snake-like motion. But look! What was that? One of the snakes had seized hold of its own tail, and the form whirled mockingly before my eyes.

The image of the snake biting its own tail – the Ouroboros – was a common symbol in medieval alchemy. 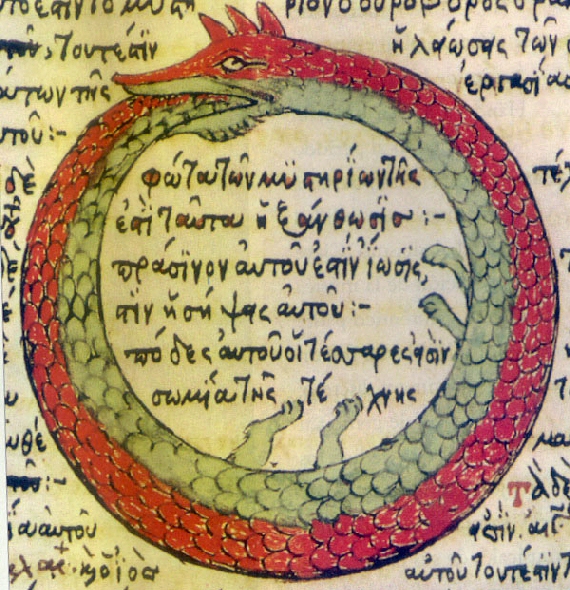 According to popular Hindu legends like the Mahabharata and Ramayana, sophisticated flying machines called vimanas used to exist in ancient India. Unfortunately, the descriptions given in these sources are poetic rather than practical, so it’s difficult to assess such claims. Or it was until the 20th century, when a hitherto unsuspected document suddenly came to light called the Vymanika-Shastra. Written in ancient Sanskrit, this was nothing short of a comprehensive textbook of aeronautical engineering.

The strange thing about the Vymanika-Shastra, however, is that it wasn’t rediscovered in some ancient library. If the standard account is to be believed, it was rediscovered by purely mental means – the result of channeling by a mystic named Pandit Subbaraya Sastry. The entire text, translated into English, can be found in Vimana Aircraft of Ancient India and Atlantis, edited by David Hatcher Childress.

The title page attributes the text to Maharshi Bharadwaja, who was one of the greatest sages of ancient India. This particular work, however, was unknown to history prior to its supposed rediscovery in the years immediately following the First World War. It was during these years that aeronautical engineering came of age in the western world... and the same years also saw a huge upsurge in Hindu nationalism. For this reason, skeptics often dismiss the work as a hoax designed to “prove” that India was capable of constructing aircraft centuries before the West.

But if that was the case, you would expect the book’s description of vimanas to closely resemble the aircraft of the day. But they don’t. The illustrations in the Childress book were produced by T.K. Ellappa of Bangalore in 1923, based on the descriptions in Sastry’s channeled text. They don’t look anything like the aircraft of 1923 – if anything, they look like classic images of UFOs! 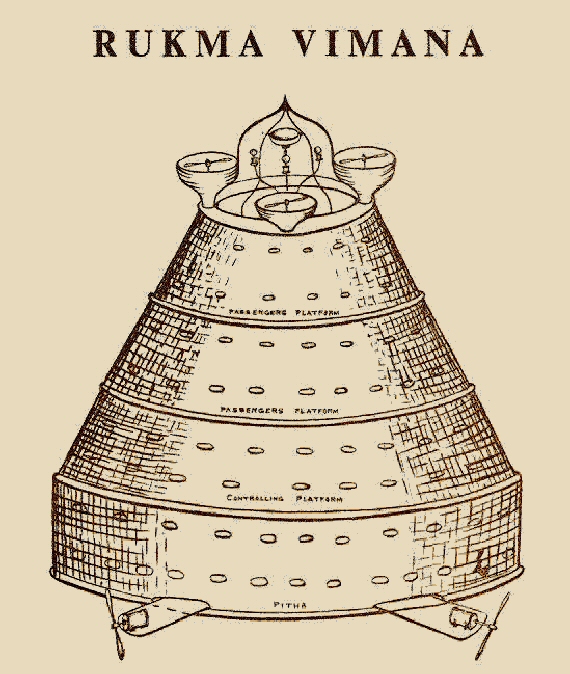 In Search of an African Monster