Mankind’s Legacy Preserved in Plastic: The Issue of our Garbage

Mankind is a plague upon this Earth; death and destruction are wrought in our wake with calculated precision and consistency.  Wherever we go, we bring with us the stench of plastic and waste and disregard.  The few of us who recognise our responsibility are overwhelmed, as is Mother Nature, by the horde of consumers among whom we live.

Those are harsh words, but issues such as these deserve harsh words, do they not?  Soft words are easy to ignore, easy to overlook.  But when one calls the entirety of humanity a plague, it begs a little more attention.

It can hardly be denied though that we are responsible for the poisoning of our world.  A few examples to incite your guilt:

That last one there bears a closer look.

The Geological Society of America published in its June edition, a paper by a group of Earth Science researchers, which should serve as an indictment of all mankind.  This paper expounds on a recent discovery, the discovery of a new type of stone.  It’s called Plastiglomerate, and in case you couldn’t tell by the name, it consists of molten plastic and other minerals.[1]  It is disgusting in every respect.

The authors of the paper suggest that this new type of stone will eventually become a geological marker for the current epoch.  In geology, the various rock strata found underground can be used, quite accurately, to measure and identify the age of the stone involved, and to determine quite a bit about the environment at that time.  Unfortunately, our time will be marked with a clear penchant on our part to dump our poisonous plastics into the environment.

The underlying point though, isn’t really that we’ve accidentally created a new geological formation, it’s that our wastes, which have been a problem for a long time, are now having permanent effects on our planet.  Consider the following graphic from the Museum of Design in Zurich, Switzerland (Museum für Gestaltung, Zürich)

Illustrating the potential time it takes for various waste products to naturally decompose, we see a spectrum emerge.  From 10 years all the way to a staggering 600 years.  That plastic water bottle you thought you threw away responsibly?  If it somehow finds its way out of a recycling program (which is more likely than you may think) and into the environment, it’s going to be there for upwards of 400 years.  That should give you pause.

But we’ve all heard the lectures all our lives, right?  “Don’t be a litterbug.” “Reduce, reuse, recycle.”  Somewhere an old Native American man weeps silently at the sight of Mt. Trashmore.  So what could be gained from yet another environmentalist rant?  Not much.  People will do what people will do.  But it may not be as bad as we thought.

We produce a staggering amount of plastic, somewhere in the neighbourhood of 300 million tons of it every year.  Nearly all of that lands, at some point, in a landfill, despite modest recycling programs around the world.  It’s estimated that 0.1% of that landfill plastic winds up in the ocean annually.  If you’re keeping track, that should amount to several million tons of plastic floating on the surface of the ocean at any given time. 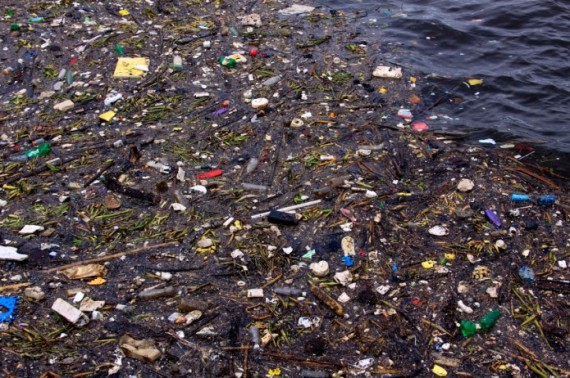 You’re probably familiar with the Great Pacific Garbage Patch, or at least you’ve heard of it.  Also known as the Pacific Trash Vortex, it’s basically a floating gyre or island of garbage.  It consists mainly of plastic, chemical sludge, and other debris of a non-biodegradable nature… and it’s huge.  It’s also not the only one.

The thing is though, those millions of tons of plastic are mostly unaccounted for.  They’re missing.

Reported June 30, in the Proceedings of the National Academy of Sciences, researchers from the Malaspina Expedition worriedly exclaimed that they are unable to account for 99% of the plastic that should be present in the oceans right now.[2]

So where is it?  No one knows for sure, but they have ideas.

Some ecologists and oceanographers are convinced they know the answer.  The fish are eating it; and that’s a scary prospect.

Peter Davison of the Farallon Institute for Advanced Ecosystem Research in Petaluma, California says that it’s undeniable that certain species of fish, namely lanternfish, are eating the small particles of plastic.  What’s not known is what effect such a diet is having on those fish, and on the other species who reside further up the food chain.[3]

Broken down plastics contain higher concentrations of DDT and PCB’s, but they also act like sponges, soaking up and trapping mercury and other chemicals in the water, essentially making them little poison pellets in every sense of the term.

Here’s the rub of this problem though; if smaller species of fish are indeed consuming these plastics, then it’s possible, and even probable, that those plastics are eventually ending up on your dinner table too.

There are other possibilities though.  The plastic could become heavy enough to sink to the ocean floor under the weight of algae and other organisms that nest on it.  The fish species that are eating it could be defecating the plastic unchanged into the water, which would also allow it to sink to the sea floor.  Or, our initial estimates of how much plastic there should be are flawed in some way.  It’s also clear, from the above, that a portion of that plastic is being transformed into plastiglomerate, which has the coincidental effect of locking the poisons away inside rock for an indefinite period of time.

It’s also possible that evolution is giving us a helping hand.

It’s been known for some time that there are microbes – certain bacteria – that will consume plastics.  It’s been observed in landfills several times, but until early 2011 it hadn’t ever been seen in marine bacteria.  The journal Nature published a paper by Gwyneth Dickey Zaikab in March 2011, wherein she described the action of these microbes as seen under an electron microscope, and the potential benefits of their appetite.

"They look like you took a hot barbecue briquette and threw it into snow. You see this melting bit all around the outside of the cells, and they're just burrowing into the plastic."[4]

It shouldn’t be surprising to find that nature has developed an army of bacterial soldiers bent on destroying the plastic menace.  After all, we’ve found these little guys feeding on and thriving in the most inhospitable environments known.

Typically, bacteria are very efficient at consuming elements in their environment and rendering them inert.  They’re so small that the waste products from their diet are functionally harmless for larger organisms, but this isn’t guaranteed.  Researchers aren’t convinced that this process has no effect on the food chain.  But it seems possible that these microbes are effectively reconverting the constituent chemicals in the plastic to their pre-manufactured form.  Sort of a natural recycling program on the molecular level.

This certainly doesn’t mean you’re free to dump your trash directly into the ocean, but perhaps, with those harsh words from earlier, we can find ways to mitigate our irresponsible consumerism and waste.