Well, now, this is interesting. In fact, it's very interesting. Over at the Department of Defense's website you can find a file that has been declassified via the Freedom of Information Act on the subject of Project Pandora (which, to a significant degree, was focused on Cold War secrets, and how microwaves can affect the mind and body).

It's a fascinating file that dates back decades. It's a lengthy file, too; it runs to nearly 500 pages and is comprised of a number of notable documents. But, here's the weird thing, if you scroll down to page 449, you'll see that it contains a copy of the controversial "MJ12/Eisenhower Briefing Document" on the Roswell UFO affair of 1947!

Of course, as most people within Ufology know, the document is one that has been the subject of much debate regarding its authenticity or otherwise. Indeed, the copy of the EBD in the Pandora file has a hand-written note on it stating that: "This cannot be authenticated as an official DoD document."

Well, that's fair enough, and something that most people within Ufology would agree with - it has not been authenticated. But, here's the issue, what is a copy of the EBD doing in a DoD file on Project Pandora? Let's look at what we know.

One of the biggest problems surrounding the Roswell case is the almost complete lack of documentation to support the claims that anything crashed or landed on the Foster Ranch, Lincoln County in July 1947.

In 1987, however, the situation changed drastically. In that year,  Timothy Good’s best-selling book, Above Top Secret, was published. One of the most controversial aspects of the book was the discussion of a document that allegedly originated with a classified research and development group established by the U.S. Government in 1947 to deal with the incident at Roswell. It was - so the story goes - variously known as Majestic 12, MAJIC 12, and MJ12.

Classified “Top Secret/Majic Eyes Only,” the document can essentially be broken down into two parts. The first is a 1952 briefing prepared by Admiral Roscoe H. Hillenkoetter (the first Director of the CIA) for President-elect Eisenhower. It informed the president that an alien spacecraft was recovered at Roswell and briefed him on the MJ12 group, its activities and membership.

The second is a 1947 memorandum from President Harry Truman to Secretary of Defense James Forrestal, authorizing the establishment of MJ12.

Shortly after Timothy Good published copies of the MJ12 documents in May 1987, additional copies surfaced publicly, this time in the United States, having been released by the research team of William Moore, Stanton Friedman and television producer, Jaime Shandera. Moore worked quietly with a number of intelligence insiders who contacted him in the wake of the publication of the 1980 book he co-authored with Charles Berlitz, The Roswell Incident.

From time to time, and under distinctly cloak-and-dagger circumstances, official-looking papers were passed on to Moore by his “Deep Throat”-like sources. The implication was that someone in the Government wished to make available to the UFO research community material – including pro-UFO data on Roswell - that would otherwise have remained forever outside of the public domain.

Needless to say, controversy raged (and still rages, albeit not on the same level) with regard to (A) the authenticity or otherwise of the documents; and (B) the circumstances under which they surfaced. Some favored the idea they were official documents, secretly leaked by insider sources connected to the intelligence community. Others, however, cried “Hoax!” While some suspected the documentation was possibly disinformation, designed to muddy the already dark waters of Roswell even further.

It wasn't just the field of Ufology that was interested in the MJ12 saga. Officialdom sat up and took note of the notorious documents, too, as we shall now see.

In the autumn of 1988, an investigation of the MJ12 papers was conducted by the FBI’s Foreign Counter-Intelligence division. It operated out of Washington and New York. Some input into the investigation also came from the FBI office in Dallas, Texas.

On September 15, 1988, an agent of the Air Force Office of Special Investigations contacted Dallas FBI and supplied the Bureau with another copy of the MJ12 papers.  Then, on October 25, 1988, the Dallas office transmitted a two-page Secret Airtel to headquarters that read as follows:

“Enclosed for the Bureau is an envelope which contains a possible classified document. Dallas notes that within the last six weeks, there has been local publicity regarding 'OPERATION MAJESTIC-12' with at least two appearances on a local radio talk show, discussing the MAJESTIC-12 OPERATION, the individuals involved, and the Government's attempt to keep it all secret."

The writer of the Airtel continued:

"It is unknown if this is all part of a publicity campaign. [Censored] from OSI, advises that 'OPERATION BLUE BOOK,' mentioned in the document on page 4 did exist. Dallas realizes that the purported document is over 35 years old, but does not know if it has been properly declassified. The Bureau is requested to discern if the document is still classified. Dallas will hold any investigation in abeyance until further direction from FBIHQ.”

A Secret communication back to the Dallas office from Washington on December 2, 1988 read as follows:

“This communication is classified Secret in its entirety. Reference Dallas Airtel dated October 25 1988. Reference Airtel requested that FBIHQ determine if the document enclosed by referenced Airtel was classified or not. The Office of Special Investigations, US Air Force, advised on November 30, 1988, that the document was fabricated. Copies of that document have been distributed to various parts of the United States. The document is completely bogus. Dallas is to close captioned investigation.”

To reinforce the government's conclusion that the documents were not genuine, official stamps and messages (some of the latter written in black-marker) were added to the copies of the MJ12 papers in the possession of both the USAF and the FBI and which reinforced the hoax conclusion. 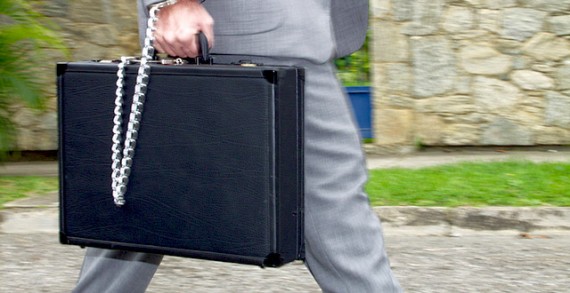 The copies of the MJ12 documents contained in the DoD's Project Pandora file (as you will see in the link contained in the first line of this article) also have a similar message written on them, which reads: "This cannot be authenticated as an official DoD document."

Logic suggests the message was written (probably) around the end of 1988, which is when the Air Force and the FBI were busily adding near-identical messages to their copies.

And, since various UFO researchers had filed Freedom of Information Act requests with all manner of official agencies for data on the MJ12 documents, it makes sense that the DoD would have had copies on file, too, as well as AFOSI and the FBI.

With that all noted, let's take a closer look at Project Pandora.

Exopaedia notes of the program that, in the early 1960s, "...the CIA discovered that the US embassy in Moscow was 'bombarded' with EMR (electro magnetic radiation). The signal was composed of several frequencies. The Pandora Project was intended to investigate and gather data on this Russian experiment. The embassy personnel was not informed of the existence of the beam, or of the Pandora project."

Exopaedia continues that, "the signal was intended to produce blurred vision and loss of mental concentration. Investigation on the effects on the embassy personnel, however, showed that they developed blood composition anomalies and unusual chromosome counts. Some people even developed a leukemia-like blood disease."

So, what we have here is a file on a program that dates back to the early 1960s and which was focused on major concerns that the Soviets were up to no good - as they clearly were. But, even so, that still does not provide the answer to an important question: why is a very controversial, questionable, document on dead aliens, crashed UFOs, and an allegedly highly-classified project to investigate both, contained in a DoD file on that old, Cold War operation instigated by the Russians?

I have no real answers to what we might term "The Mystery of Microwaves and MJ12." Maybe someone out there knows.

Time-wise, however, this is all very interesting. My newly-published book, Close Encounters of the Fatal Kind, includes a chapter titled "The Microwave Incident." It deals with the mysterious and controversial death of a man who was involved in a 1965 UFO event that may actually have been fabricated, via the use of mind-altering/warping technologies. The alleged cause of the death in the faked, flying saucer encounter? An over-use of microwave technology.