The world is full of wonders and mysteries, some of which continue to capture our attention and some which for some reasons have been lost to time. When looking at historic accounts it is possible to find perplexing enigmas that seem to have been forgotten, fading from all memory and the public consciousness. For whatever reason, these mysteries have fallen into the cracks and crevasses of lost history. One such place is the monster infested Forbidden Pit of deepest, darkest Africa.

In the early 1920s, several news publications of the time shed light on a curious location in Africa, which was at the time a continent largely unexplored by Westerners, a place full of dark wonder, adventure, and ancient mysteries. It was reported that in what was referred to as North Rhodesia, there was a mysterious pit in the ground measuring at least a hundred feet wide that the native Mashona and Matabele people of the area shunned, a place only known as The Forbidden Pit.

It was said that the pit was home to some horrific, reptilian beast that would emerge to terrify the local tribes. Apparently somewhat like a dinosaur in appearance, the creature's appetite was said to be ravenous, and that it would ferociously hunt and kill whatever it could catch, including human beings. The tribes spoke of how beastly howls, wailing, and roaring could often be heard emanating from the depths of the hole. One tribe, the Ila, had allegedly become so distressed by the horror from the pit that a group of tribesmen were tied together and flung into the craggy black hole as a sacrifice in an attempt to appease the monster that lurked within. 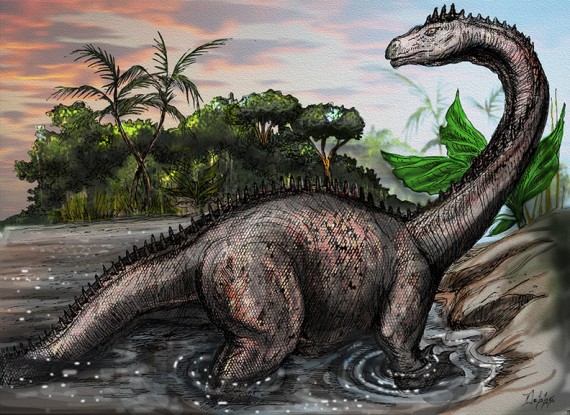 Both the October 1925 edition of the New Zealand Herald and the December 1925 edition of the Ellesmere Guardian reported that an expedition to the mysterious hole was mounted by a man only known as Mr. Worthington, who was the Native Commissioner of the area. After setbacks trying to find a native guide brave and willing enough to take them there, the expedition was reportedly able to locate the Forbidden Pit, which was described as having an underground river that rose to within  forty feet of the top.

The expedition saw no strange monsters or unusual wildlife in or around the pit, and heard no monstrous roaring, but the guide insisted that they were there, as did other tribesmen of the vicinity. The chief of the Barotse tribe, a man known as Lewanki, told Worthington on several occasions of a strange beast he had seen in the marshes near the Forbidden Pit. The New Zealand Guardian, October 17, 1925, issue 19151, reported that the chief had seen:

..an animal like a monstrous hippopotamus, but many times larger, which swirled away as he looked but left behind it the traces of its crawling limbs like ruts of wagon wheels.

The chief claimed that the monster on occasion crawled from its lair within the pit to prowl the surrounding swamps and marshes. Worthington was unable to find any evidence of such a creature in the marshes either, but the native stories persisted, and whatever it was that supposedly lurked in the depths of the Forbidden Pit had clearly frightened them. Many tribesmen were afraid to even speak of the monster. It was difficult to get anyone to go anywhere near the place, guides were hard to come by, and the expedition members were repeatedly warned to stay back.

The New Zealand Guardian summed up its report by saying:

The story conjures up visions of some great reptile like the Plesiosaurus, which wallowed in the swamps of Africa millions of years before ancient man walked there. Fifty miles from the Forbidden Pit the skull of Africa's earliest known man was found, a contemporary of the cave men of Europe. Could he have seen this monster or its ancestors?

It can be forgiven the lack of scientific foresight shown in this citation since at the time we did not know as much about prehistoric people or animals as we now do. It is interesting that even all the way back in 1925, Plesiosaurus was the go-to explanation for such a creature, regardless of how questionable it was that a Plesiosaurus would be "wallowing in the swamps of Africa," or that the chief's description in no way matched it.

The Ellesmere Guardian, December 15, 1925, issue 2945 edition offered much speculation on the pit being perhaps a hidden sanctuary for prehistoric dinosaurs long thought to have gone extinct. It also postulated that even if the strange creatures of the Forbidden Pit were not necessarily dinosaurs, it was feasible for some other extinct beast to be behind the reports. The publication said:

In Africa there are a number of animals which, according to the geological timepiece, have only lately become extinct, and there is no reason why in some protected spot where food was plentiful and enemies few, some of these ancient animals should not have survived to show the world, like the okapi, that they are not yet prehistoric.

This all leaves one to wonder, just what in the world was the Forbidden Pit of Africa? If these reports are to be believed, then is it still out there hidden away from the world in some remote place in Africa? We may never know. It seems that whatever these reports were describing, this monster infested pit is a place that has faded into a mere forgotten historical news curiosity.