There are some places in this world that are steeped in a thick, intangible fog of foreboding. These are places that have the capacity to truly upset us on some primal level. They grip us with tendrils of dread when we are there, and haunt our dreams long after we leave. One such place is Mexico's genuinely disturbing island of horrors, La Isla de las Munecas, the immensely creepy and allegedly haunted "Island of Dolls."

La Isla de las Munecas is located in the area of Xochimilco, a borough within the Mexican Federal District which was historically positioned on what was once Lake Xochimilco. Xochimilco is a locale well-known for its extensive system of canals, which are a relic of the times when the settlements of the Valley of Mexico were interconnected by networks of canals and lakes.

The island itself is what is known as a chinampas, which are artificial islands which were built in shallow areas of the lake during the pre-Hispanic period as a means of increasing agricultural production. The chinampas were mounds of earth and mud heaped upon a frame of intertwined juniper branches and tied to the shore. As the islands sank, new ones would be built on top, stacking one over the other until a rectangular island was eventually formed and permanently affixed to the bottom of the lake. Upon these islands were grown a variety of crops, and they were of great economic value during the time of The Aztec Empire. The artificial islands were so lush that they were also known as "floating gardens," and the large number of chinampas constructed subsequently contributed to the gradual shrinking of Lake Xochimilco into the canal system seen today.

In modern times, most of the chinampas have deteriorated and fallen into disrepair, yet around 5,000 remain and they are popular with tourists, who ride along the canals in special gondolas called trajineras. Indeed, due to its important historical connection to pre-Hispanic Mexico, Xochimilco with its ancient man-made islands and canals is deemed a World Heritage Site. However, one of the chinampas that all but the most fearless visitors may want to steer clear of is the menacing Island of Dolls.

La Isla de las Munecas is perhaps the most infamous of Xochimilco's chinampas due to its bizarre history and status as one of the spookiest, most haunted places in Mexico. The story begins in the 1950s with a reclusive loner known as Julian Santana Barrera, who took up residence on an abandoned chinampa where he lived in a hut by himself. He then used the artificial island for growing not fruits and vegetables, but nightmare fuel.

After witnessing a young girl drown in a nearby canal, Barrera became convinced that the spirit of the girl was haunting him. He reportedly claimed he could hear the dead girl singing, giggling, and calling to him from over the water, as well as dragging and scratching noises outside of his hut or rapping on the windows when no one else was there. Sometimes he could see her ghostly form through the trees or over the water, hovering about the island at night. Disturbed by these visitations, Barrera's behavior became increasingly erratic.

One day, Barerra saw a doll drift by in the water of the canal and took it as a sign. He fished the doll from the water and hung it up on his island believing that it would protect him from the wrath of the girl's ghost. It soon became apparent to him that one doll was simply not enough, as he believed the restless spirit was still tormenting him. Barrera became obsessed with collecting more dolls, sometimes even trading vegetables he had grown for more of them in his desperation to appease the angry spirit of the girl. He hung the dolls all over the island, amassing more and more until eventually there were hundreds of the things strewn all over the place, covering the chiampas. Barrera put the dolls everywhere; on the ground, propped against trees, tied to tree trunks and fences, and even hanging from the branches like twisted Christmas tree ornaments. It is said that he would often rearrange the dolls and frequently move them into different locations and positions about the island as he saw fit.

Word of mouth spread about the odd hermit on this island surrounded by his creepy collection of disheveled dolls, and local legends began to form. It was said that the dolls would come to life at night and roam the island brutally killing animals, and that if one listened carefully the gibbering whispers and giggling of the dolls could be heard as they went about their grim work. It was rumored that Barerra would talk and sing to the dolls, caring for them as if they were real children. It was also said that the dolls became infused with evil as soon as they were put up on the island, and that they were all connected by some insidious supernatural force.

This went on for years until one day Barreras was found dead, floating face down in one of the canals. Chillingly, it was the very same canal the little girl had died in all those years ago, the same girl whose ghost had slowly driven Barrera insane. Local legend has it that Barrera's ghost continued to inhabit the island, haunting it along with the dolls. 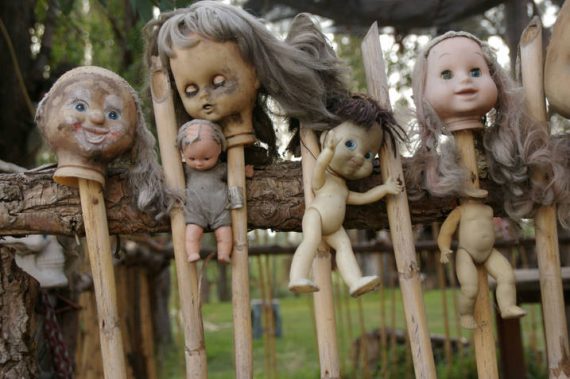 Today the island's dolls are still there. They are scattered haphazardly all over the island, strung up everywhere, with their dull, wide eyes gazing lifelessly over their domain. Over the years they have deteriorated to the point that most are in various states of disrepair, and many are filthy and decrepit, all of which makes them that much scarier and further fuels the menacing ambiance of the island.

The dark superstition and folklore associated with the island showed no signs of abating with Barrera's death. People say that when visiting the island, it is a good idea to bring a doll with you to appease the dark spirits there. As soon as the new doll arrives, it is believed to connect with the others through whatever black magic it is that courses through them. In addition, Barrera himself is still said to survey the place, watching all who visit from the shadows.

The stories of the paranormal pervading La Isla de las Munecas have also captured the attention of those looking for evidence of such goings on, with the TV show Destination Truth launching an expedition to the island. Barrera's nephew explained to  the crew that indeed the dolls seemed to be charged with some eerie supernatural energy and that the island was haunted, cursed, or both. The crew were not disappointed as they managed to experience quite a few strange happenings during their stay. Strange dragging sounds were heard on the roof of the island's shack as well as other creepy noises and bumps in the dark. Sensors for ghostly energy also were going wild with readings and the highlight of the show came when one of the dolls appeared to open its eyes of its own accord when asked to do so. The entire incident was caught on camera. Say what you will about its authenticity or whether it constitutes evidence of the paranormal, but there is no denying that the footage is exceptionally creepy and disturbing. 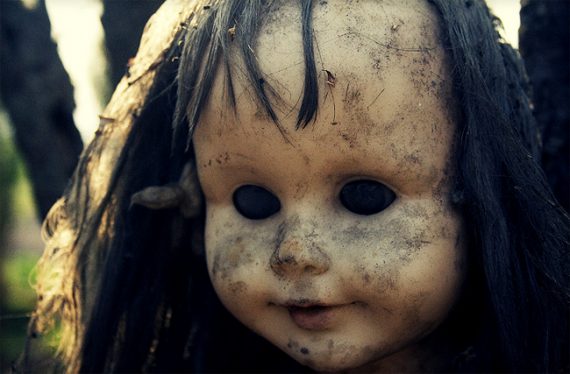 Such spooky stories have apparently done nothing to stymy the flow of curious visitors looking for a peak at the macabre. Over the years, La Isla de las Munecas has truly become one of the most famous chinampas of Xochimilco based purely on its grim reputation and bizarre history. The island's current tenant, Barrera's own nephew Anastasio Valasquez, says hundreds of people flock to see the island and its dolls every year. For the truly brave, nowadays it is relatively easy to book a tour to see the island and it is easily accessible by ferry or gondola.

The visitors may come and go but the dolls remain, twisted bodies strung up upon the trees and beady eyes staring at, perhaps even watching their lair as they have for so long and will likely continue to do until they've turned to dust. Perhaps Barrera is there too among his slowly decomposing dolls, forever to care for them like his own children.

Do We Think With Our Bodies?