Among our avian friends in the animal kingdom, there have been, and still are today, some rather monstrous feathered folk that have existed. The moa, for instance, was a large flightless bird of which there were nine different species, all located in New Zealand, the largest of which may have exceeded 12 feet in height.

But when it comes to big birds, this newly discovered prehistoric member of the family really takes the cake:

Scientists have identified the fossils of what could be the largest flying bird ever found.

With an estimated 20- to 24-foot wingspan, the extinct P. sandersi was twice the size of today's biggest flying bird, the royal albatross, according to the National Evolutionary Synthesis Center in North Carolina.

The fact that the bird existed arouses a fascination that is overtaken, perhaps, only by the fact that it actually could fly. But for followers of Fortean lore, this creature may have parallels to a unique subculture in modern times, surrounding a cryptic and strange photograph, purportedly taken at the end of the nineteenth century, which allegedly showed a very similar creature. 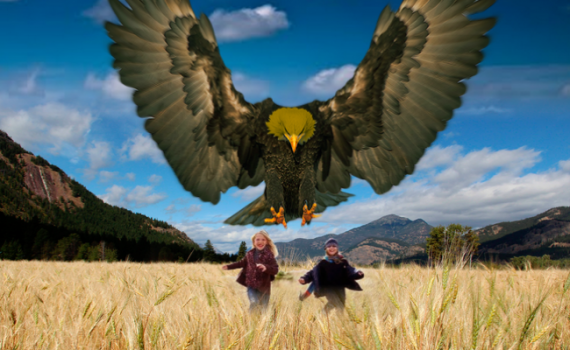 As big as the bird itself was said to be is the problem with finding the photo... nobody seems to know where it existed, let alone where it could be found today, casting a veil of doubt over what many consider to be a highly dubious story... which goes something like this:

In April of 1890, somewhere in the Arizona desert a group of cowboys observed an enormous flying creature flying near a ranch they were attending. Two of the men pursued and killed the animal, which was described as "birdlike," but with a body and face resembling an alligator. Unlike the enormous P. sandersi, the description of the infamous "Thunderbird" shot and killed by the Arizona cowboys did not include feather; instead, the creature bore smooth skin, more similar to a large pterosaur (and of this, it should be noted that the aforementioned winged saurian was indeed recognized among extinct species by 1890).

The story gets stranger, however, as it is said the animal was returned to the nearby town of Tombstone, where it was pinned to a barn to display its wingspan. At that time, a photograph of the creature was said to have been taken, and featured in the Tombstone Epitaph.

North Carolina cryptozoologist Mark A. Hall, among others, have maintained that the aforementioned paper did actually carry such a story, though newspaper hoaxes cooked up by "liar's clubs", or perhaps bored local reporters, weren't uncommon, as we know of the period. No further historical corroboration has ever been made to bolster the supposed tale, further casting the entire matter into the realm of doubt. Commenting on the strangely absent photograph, fellow Mysterious Universe blogger Nick Redfern outlined the problem in an article he wrote on the subject a while back:

"Numerous researchers, investigators and authors of a whole range of anomalies claim, with absolute unswerving certainty, that they personally saw the priceless picture when it was published. The big problem, today, however, is that despite the fact that the pages of all the above-magazines, and many others too, have been carefully and dutifully scoured – even to the point of near-obsession – the picture cannot be found, anywhere at all. It’s almost as if it never even existed in the first place."

And maybe it didn't; after all, how likely would it be that the entire matter had been the result of some incredible set of circumstances where a photo did exist in actuality, which strangely vanished from the possession of every researcher who claimed to ever have it... as well as every copy of every print publication that ever carried it? Not only does the scenario strain credulity, but the odds against it are astronomical.

And yet, among those claiming not only to have seen the thing, but even to have possessed a copy, had been Ivan Sanderson, who alleged that the photo he owned was loaned to a pair of acquaintances in the 1960s, who simply never returned it. 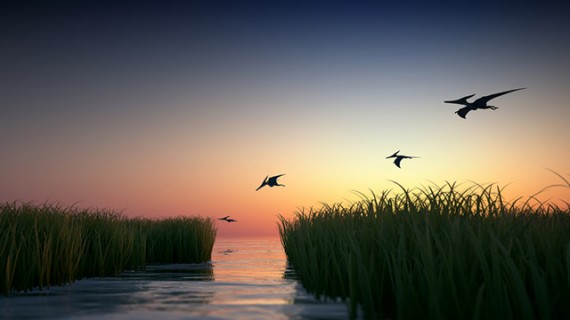 The fact that Sanderson came into play with all of this is rather novel, looking at the modern discovery of an actual bird (rather than a winged alligator) of similar proportions: looking again at its scientific name, we see that the animal is called P. sandersi, which for a moment, even had me wondering if the taxonomical title hadn't been a nod to the late Fortean; however, it turns out that the name was awarded this creature in honor of Albert Sanders, retired curator at the Charleston Museum, where the animal's fossilized remains are now kept.

While the existence of this "Thunderbird" shows us that such an animal could indeed exist (and in fact did exist in our ancient past), it doesn't necessarily make a case for the existence of similar animals today, or at any time in the last several decades. So what, then, do we make of additional reports that have come to light over the years, which purportedly describe giant "mystery birds"?

Numerous reports of strangely large birds came to light during the 1940s, and occasionally throughout the decades that followed. One of the most sensational "giant bird" stories ever to be reported allegedly occurred in the summer of 1977, involving two boys who were "attacked" by the beast, which tried to carry one of them off from his backyard in Lawndale, Illinois. It is believed the bird in question may have been an Andean condor, based on the description given by the parents of the child. However, this bird is indigenous to the Andean Mountains (as the name entails) and the west coast of South America, and its claws, despite their strength, would likely have a hard time carrying, or even lifting, a small child.

Arguably, one of the more credible series of reports of a giant bird stem from Alaska as recently as 2002, when reports of a tremendous bird Made national headlines:

'A bird the size of a small airplane was recently said to be seen flying over southwest Alaska, puzzling scientists, the Anchorage Daily News reported this week.

The newspaper quoted residents in the villages of Togiak and Manokotak as saying the creature, like something out of the movie "Jurassic Park," had a wingspan of 14 feet (4.6 meters) -- making it the size of a small airplane.'

The report went on to say that the animal was observed by 43-year-old Moses Coupchiak, who described seeing the beast and radioed to a nearby village that people keep their children indoors. A subsequent observation by several individuals on board a plane, piloted by John Bouker, was also reported, quoting the pilot as saying, "The people in the plane saw him. He's huge, he's huge, he's really, really big. You wouldn't want to have your children out."

Biologists commenting on the story believed that the animal could possibly have been a Steller's eagle, which can have a wingspan of as much as eight feet. However, it seems unlikely that this animal would be easily mistaken for being a small plane, as the creature seen over Alaska had been.

It seems equally unlikely that a species of bird comparable in size to P. sandersi might still exist today, based on the necessity for there being a breeding population, and enough food for what would presumably be a large raptor. It is worth noting that smaller bird species that are presumed extinct, such as the Eskimo curlew, are from time to time reportedly seen. However, these accounts are based on unconfirmed observations, often by amateur birdwatchers, and the last reliable account of the bird's appearance (which occurred in Texas, of all places, despite the bird being indigenous to Canada and Alaska) was more than three decades ago, leading many ornithologists to consider the Eskimo curlew an extinct species.

Some would hold that there are still living specimens, despite the minority of reports that confirm their perseverance. Is it likely, or even possible, that a larger bid could still exist also? If not, can the eyewitness reports of a bird as large as a small plane purely be chalked up to error on part of the eyewitness? Quite obviously, whatever the case may be, the legend of the Thunderbird is alive and well, however unlikely the possibility that an extant species of giant avian predator is actually out there today.