UFOs, Invisibility, and a Weird Book

Born at the turn of the 20th Century, Morris Ketchum Jessup had a skilled mind, and by the age of twenty-six had attained a Master of Science degree in astronomy from the University of Michigan. While Jessup’s primary goal was to work in the cutting-edge field of astrophysics, he was chiefly employed as a salesman in the car industry. As the years progressed and as the 1950s dawned, however, Jessup found himself becoming more and more involved in two very different areas.

They were: (a) the mysteries of the distant past, such as the questions surrounding how the gigantic structures of the ancients – Stonehenge and the pyramids of Egypt being two of many examples – were constructed; and (b) the growing presence of UFOs in the world’s skies. Jessup’s thoughts and observations were extensively detailed in a number of books.

Without doubt, however, his most famous title was The Case for the UFO, published in 1955. It was a book made notable by the fact that not only were its contents groundbreaking, but it set off alarm bells within none other than the corridors of power.

Precisely why the U.S. Navy became embroiled in the matter of the life and work of Morris K. Jessup is a very strange story all in its own. Almost immediately after The Case for the UFO was published, Jessup received a letter, one which was forwarded to him by his publisher. Another soon followed, as did a third. And, then, a fourth appeared in Jessup’s mailbox. And so it went on and on.

The writer behind all the letters was one Carlos Allende, a former seaman with the U.S. Navy. As Jessup read Allende’s words, he wasn’t sure if he was dealing with a madman, or if he had been tipped off to the story of the century. Allende’s correspondence was, chiefly, on two topics: (a) Jessup’s views on levitation in the ancient past; and (b) a supposed highly-classified experiment undertaken by the U.S. Navy to make a warship radar-invisible, but which went terribly wrong and briefly rendered the craft and crew optically invisible – something which allegedly left some of the crew-members dead and others mad as hatters.

It has since become infamously known as “The Philadelphia Experiment,” a story which, today, has mutated into an epic and much-debated saga filled with controversial tales of cover-ups and conspiracies, time-traveling sailors, and futuristic technologies.

Unbeknownst to Jessup, two years later, in early 1957, Allende anonymously mailed a copy of The Case for the UFO to the U.S. Navy. It reached the heart of an Office of Naval Research (ONR) project researching fringe technologies and new and novel weapons-systems.

The copy of Jessup’s book in question was filled with odd, scrawled ramblings from Allende, many of them on Egyptian and South American levitation techniques, flying saucers in both past and present, and the thorny matter of that allegedly secret experiment in invisibility – which supposedly occurred in the Philadelphia Naval Yard in 1943.

One might suspect Navy staff would have tossed the book out with the garbage. They did not. Instead, they did something most curious: they invited Jessup to meet with senior personnel in Washington, D.C., to discuss his findings.

It was, for Jessup, both a positive and a taxing time. On the one hand, that officialdom was seemingly taking his book seriously, made him excited and even awed. On the other hand, Jessup became deeply worried. He wondered: what if the Navy’s interest in The Case for the UFO was just a ruse?

What if its real intention, he thought, was to ferret out exactly what he, Jessup, knew about Carlos Allende – a man who, Jessup suspected, may have significantly compromised national security by releasing details of a highly secret, classified U.S. Navy project? Whatever the answers, Jessup became not just worried, but deeply paranoid.

While the meeting with the Navy was not a traumatic one – in fact, it was undertaken in quite relaxed fashion – the fact that Jessup’s interviewees, Captain Sidney Sherby and Commander George W. Hoover (of the Office of Naval Research’s Special Projects Office), spent a significant amount of time asking about Allende got Jessup in a state of deep stress.

And even more so when Jessup learned that the ONR had contracted the Garland, Texas-based Varo Manufacturing Company to run off a couple of dozen copies of the Allende-annotated version of Jessup’s book. 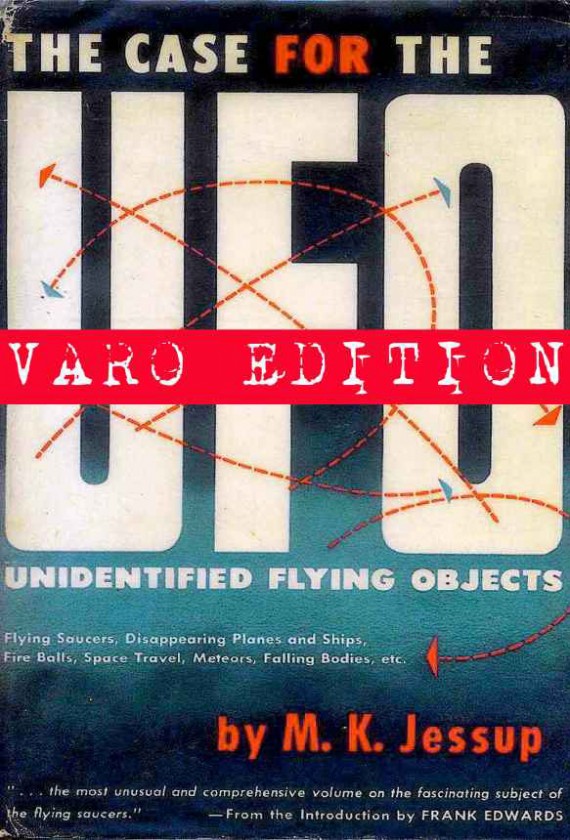 While the saga of the Philadelphia Experiment continues to live on, the life of Morris Jessup did not. He was found dead in his car - from carbon-monoxide poisoning - in Miami, Florida's Matheson Hammock Park on April 20, 1959. So, why am I mentioning all of this now? Well, I'll tell you: original copies of the annotated version of the Jessup book are (a) scarce in the extreme; and (b) sell for incredible amounts of money.

The good news, however, is that a brand new edition of the annotated edition of The Case for the UFO is now available, thanks to New Saucerian Press.

Whatever your views on the Philadelphia Experiment, Jessup's controversial book, and his equally controversial death in 1959 (the latter being a story I tell in my latest book, Close Encounters of the Fatal Kind), I would urge you to get a copy of this rare and much sought after version of The Case for the UFO. It's fascinating, strange, deranged, and mysterious in equal parts!