One of the more bizarre, little discussed, and "fringier" areas of cryptozoology involves the pursuit of various creatures said to inhabit not the remote forests or jungles of the world, but rather the skies above our head. We are not talking about flying dinosaurs, flying humanoids, Thunderbirds, or other winged weirdies. The creatures I am referring to are the strange creatures that drift about and prowl the skies for their entire lives, the phenomenon known as Atmospheric Beasts. Although these creatures have been covered here brilliantly at Mysterious Universe before, notably by Micah Hanks in this article and Rob Morphy in this one, it has long been an area that fascinates me and so I thought I would share one of my own ideas concerning the connections between these alleged creatures, UFO sightings, and earthquakes.

First, a refresher on what these creatures are. Atmospheric beasts, or atmospheric life-forms, as they are often called, are said to be organisms that live their entire lives floating high in the atmosphere, undetected by humans. These creatures are most often described as having bodies that are semi-solid, or almost insubstantial, with some reports even claiming that they are able to adjust their density from almost immaterial and invisible to more solid, depending on as yet unknown factors. Numerous theories have been posited as to how such seemingly fantastical organisms could manage to stay adrift in the air, such as air bladders or very low body densities. 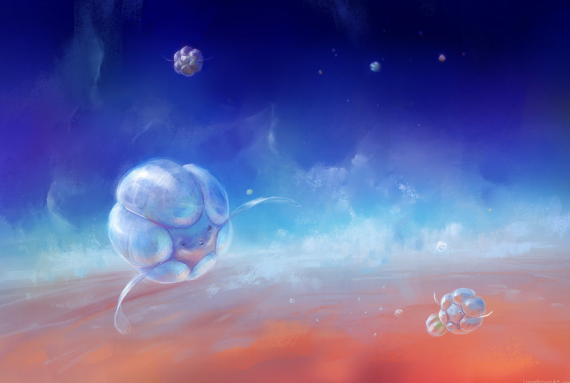 The appearance of these atmospheric beasts varies wildly. Accounts have variously described them as amorphous and cloud-like behemoths, finned squid-like creatures, floating jellyfish, translucent, vaporous blobs, flitting rods, amoeba-like organisms, gelatinous oddities, and even dragons. The sizes of atmospheric beasts likewise run the gamut from tiny and bird-like, to gargantuan monsters hundreds of feet long. Although these enigmatic creatures are said to typically lurk too high in the atmosphere or to be too insubstantial to see with the naked eye, there are instances when one might become observable for some reason. Indeed, there has been a substantial amount of sightings reports over the years from all over the world describing unusual flying monsters that do not fit into the typical mold of thunderbirds or other flying cryptids. These atmospheric life forms have even allegedly been photographed, and there have been reports of the gelatinous remains of dead ones on occasion.

Over the years, the alleged existence of such atmospheric organisms has led to speculation that they may be connected somehow to the worldwide UFO phenomenon. It has been postulated that rather than having some artificial basis such as alien craft or experimental aircraft, large sky creatures could account for at least some reported UFO sightings. Even the lights reported in UFO sightings have been explained on occasion as the result of some sort of bioluminescence.

The idea of air-going organisms lying at the root of some UFO reports is odd and certainly controversial, but it is not new. The famed cryptozoologist Ivan T. Sanderson himself was fascinated by the idea of giant animals swimming through the air above us, and wrote a good deal about them. Among Sanderson’s various hypotheses and musings concerning atmospheric beasts was the notion that many UFO reports may be in fact attributable to these sky dwelling creatures. UFO author Trevor James Constable also noted in his 1975 book The Cosmic Pulse of Life, that the UFO phenomena may well be caused by the presence of some kind of goliath beasts inhabiting the skies.

If these atmospheric beasts do roam the skies of the world, and they are high up enough to have an entire ecosystem unknown and undetected by us, then it leaves one to question what could possibly be the reason why they are sometimes spotted by humans in the form of UFOs and other airborne anomalies. Some of the beasts have been said to descend for the purpose of feeding on earthbound creatures, but I have always been wary of this theory, as I wonder why a creature adapted to a food chain based in the upper atmosphere would have a need for terrestrial animals to subsist on. Would they even have the physiology required to digest such prey? Would they be able to pick up such animals and whisk them away up into the clouds? Remember we are talking about light, amorphous, airy creatures that presumably spend the entirety of their lives drifting along the air currents. These are most likely organisms of the very high atmosphere. I have always had the notion that such a life-form drifting so low away from its normal habitat so high in the sky would be akin to some creature from the deep, dark sea being dragged from its abyssal lair to the surface, and thus would likely be either dead, injured, or disoriented. So what causes these atmospheric creatures to come down to earth so to speak?

The UFO author Trevor James, in addition to outlining his ideas on the connection between the air beasts and the UFO phenomenon, also added the fascinating hypothesis that 20th century radar might disturb such creatures, causing them to become more solid and visible to the naked eye, or to drop down to lower altitudes where they would be more readily sighted.

This bit of speculation leads to the interesting notion that these creatures, if they do indeed exist, may perhaps use some sort of navigation system to maintain their bearings and find their way. This in and of itself is not so farfetched. We know that many animals, especially those that regularly migrate, use various biological systems to navigate and home in on their destinations. We also know that these systems can be disrupted by either natural or artificial means. Artificial lighting is well known to cause disorientation in a variety of migrating animals such as sea turtles and birds, sonar can have effects on whales, and radar has been shown to somehow throw off the navigational abilities of certain birds as well, perhaps because it disrupts their innate magnetic compass. Since known animals can certainly have their instinctual navigational abilities disrupted, then it is certainly plausible that the proposed atmospheric organisms could suffer similar pitfalls.

If atmospheric beasts do indeed use such biological systems to navigate and maintain their orientation and bearings, then this offers a compelling clue to one potential reason for these creatures to drop lower in the atmosphere and also a potential connection with some UFOs under certain conditions. A curious trend that seems to be fairly consistent is the increase in reported UFO activity just before or after major earthquakes. I had never really given this much thought before, but I actually currently live in Japan and I was present during the 2011 earthquake here. One thing I noticed in various Japanese Fortean articles, UFO publications, and indeed sometimes even in major newspapers was the undeniable rise in the number of sightings of UFOs and strange phenomena in the skies just prior to, during, and after the earthquake. This piqued my interest, and after further investigation, I found that spikes in UFO activity were indeed consistently reported before and during the 2011 earthquake and tsunami of Japan, the Sumatran earthquake and tsunami of 2004, the Haitian earthquake of 2010, and the Philippine earthquake of 2013. This seems to imply some possible connection between the seismic activity and the UFOs that could, at least in the case of earthquakes, possibly have a cryptozoological basis in the form of the hypothetical atmospheric organisms.

When an large earthquake occurs, there is more going on than just the shaking of the ground or the creation of tsunamis. During earthquakes, an enormous amount of surface motion is generated, which is released as powerful waves into the atmosphere. Known as seismotravelling ionospheric disturbances, these waves can penetrate all the way up into the highest parts of the atmosphere, known as the ionosphere. All earthquakes produce these disturbances to some degree, but in the case of very major earthquakes these can be quite profound. The March 11, 2011 earthquake In Japan in particular produced one of the most massive such atmospheric disturbances ever recorded. It created waves of large amounts of electrically charged particles travelling 720 to 800 kph (450 to 500 mph) that reached up to around 350km (220 miles) above the Earth. Japanese research showed that the March 11 disturbance was three times more powerful than the next largest such disturbance, that of the 2004 Sumatran earthquake.

One effect of these disturbances is their ability to disrupt radio and other signals, which is in fact one of the ways scientists use to measure them. If atmospheric beasts do exist high above us, and if in fact they do use some sort of navigation system that can be disrupted by things such as radar, then what might such a large, earthquake-induced atmospheric disturbance do to them? Is it not at least feasible that these powerful waves could be disorienting some kind of atmospheric lifeforms and dislodging them from their usual unseen habitat high above us so that they are visible to the human eye and subsequently reported as UFOs? It seems that it is at least as plausible a possibility as other explanations such as alien spacecraft, at least in the case of UFO sightings reported before, during, and just after major seismic events.

Of course this is all just an exercise in speculation. Are atmospheric beasts even real? Who knows? There is no solid evidence that such organisms even exist at all. If they are real, these creatures would not exist in a vacuum. There would need to be a whole ecosystem in place high up in the sky, perhaps based on some type of air plankton, which incidentally considering the recent bizarre discovery of sea plankton surviving on the outside of the International Space Station technically does not seem as far fetched as it perhaps once was. Maybe a whole food chain is in place in the upper atmosphere based on some sort of plankton evolved to live up there. Nevertheless, it is certainly a rather far out notion to think there could be a whole new biome of undiscovered organisms existing undetected high above us, but then again it seems worth considering that we never thought it was possible for life, let alone whole ecosystems, to exist in extreme environments such as deep sea thermal vent communities either.

Whether these sky beats are real or not, and as unlikely as it may be, I find it interesting to look at these phenomena and think of such alternative explanations for UFO sightings occurring around major seismic events such as earthquakes.

The Mystical Forbidden Mountain of the Himalayas