Is This a Bear, a Costumed Human or Something Else?

A video of what appears to be a black bear walking upright through a New Jersey neighborhood has residents wondering if it’s a talented bear, a human in a bear costume or something else. Take a look and see for yourself.

The video was taken at 5:45am on August 4 by Ian Bohman of Oak Ridge, New Jersey. He used his cell phone to record the bear walking across the street, rummaging in a trash can and stolling to the woods with a very humanlike gait.

The Jefferson Township police department got a copy of the video along with numerous calls and said it’s an injured bear. A person in the department who apparently knows something about bears said this:

We all know there is an injured bear in town. Hurt bears often walk on their hind legs to compensate for their wounded paws, legs, whatever.

Whatever? That bear isn’t walking like he hurt his whatever.

Speaking of strange animal videos, the surveillance camera video of the mysterious big cat sighting in Norwalk, California, has been “enhanced” but experts and non-experts alike say they still can’t figure out what it is and it still hasn't been spotted again.

As long as we’re asking the question: “What is this?” 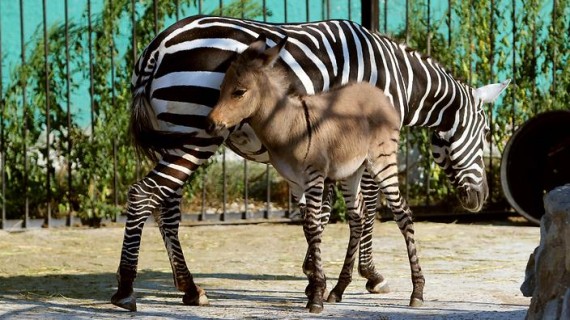 It’s a zonkey, the offspring of a female zebra and male donkey born last week at a zoo in Crimea. Zoo officials are somewhat embarrassed by this since legitimate zoos don’t breed hybrids, but the lonely zebra had been placed in a area with other hooved animals and one thing led to another.

Take It with a Grain of Salt, Unless You’re an Alien, a Fairy or Alux!