In the annals of our World Wars, there have been many atrocities committed by our kind against each other. The South Pacific during World War II holds a special distinction for being an especially brutal and savage killing ground the likes of which humankind has never seen before or since. Yet one of the bloodiest and most horrifying massacres in the history of the war came not from the hands human beings, but from the jaws and teeth of the animal kingdom. During World War II on one remote island in the South Pacific, a platoon of nearly a thousand armed Japanese troops entered crocodile infested swamps and most never returned; a disappearance that, if reports are to be believed, would make it the single greatest instance of carnage caused by animals in history. 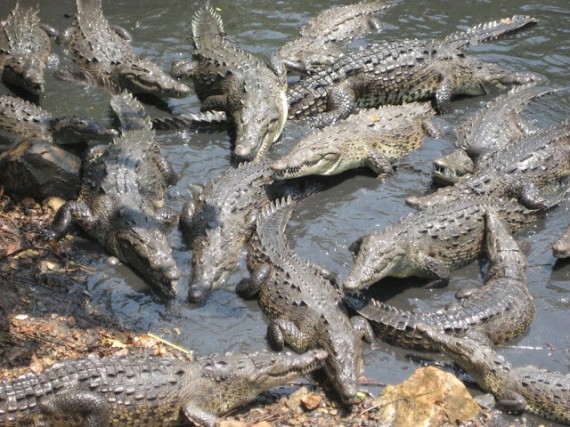 For 6 weeks during January and February of 1945, the swamp-covered island of Ramree, located in the Bay of Bengal off the coast of Burma, was the setting for a bloody battle between Japanese and Allied forces. The Battle of Ramree Island was part of the Burma Campaign during World War II, and was launched for the purpose of dislodging Japanese Imperial forces that had invaded the island in 1942. On January 26, 1945, British Royal Marine units accompanied by the 36th Indian Infantry Brigade pushed into the enemy occupied island in an effort to establish an airbase there. They were met with stiff resistance from the Japanese, and vicious fighting ensued.

After a long and bloody battle, the Allied troops managed to gain the upper hand, flanking a Japanese stronghold and flushing out an estimated 1,000 Japanese troops. The defeated Japanese soldiers abandoned their base and made a beeline across the island in the hopes of merging with a much larger Japanese battalion on the other side. Since the British were flanking them on all sides, the Japanese decided to cut straight through 16 km of dense tidal swampland to reach their objective, ignoring all appeals by the British for their surrender. It was to be the beginning of a horrific ordeal for the enemy troops, and most would never be heard from again.

The soldiers quickly became slowed by the thick, muck-filled swamps that impeded their progress. In addition, many of the men began to succumb to tropical diseases carried by the swarms of mosquitoes as well as the various poisonous spiders, snakes and scorpions that skittered and slithered through the muddy underbrush. Over the course of several days of struggling through the swamps in this manner, starvation and a lack of drinking water became a very real threat as well. All the while they were harassed by sporadic artillery fire from British forces positioned at the edges of the swampland.

This was to be merely the beginning of their nightmare. One night British troops patrolling the periphery of the swampland reported hearing panicked screams of terror and gunfire emanating from within the darkness. It quickly became apparent that somewhere out there in the dark swamp, the Japanese troops were being ravaged by some evil menace. The British troops stationed there cringed in horror despite the fact that it was being unleashed upon their enemy.

Unfortunately for the Japanese troops, the swamps of Ramree were infested by countless, very large saltwater crocodiles, which can grow upwards of 20 feet long and over a ton in weight. The weary and bloodied soldiers thrashing clumsily through the swamps may as well have been a dinner bell ringing. The soldiers were viciously and mercilessly attacked by the reptilian beasts, and survivors reported how swarms of the aggressive animals descended upon them as terrified soldiers fired blindly in all directions in a futile effort to drive off their ravenous aggressors. Some reports from survivors described how the crocodiles would often appear out of nowhere from the murky water to drag screaming and thrashing men to their doom. The mosquito-clouded air was reported to be filled with the sounds of gunfire, snapping jaws, and the horrible gurgling cries of men being ripped to shreds, as the soldiers tried desperately to escape a fate worse than Allied troops. The naturalist Bruce Stanley Wright described the scene unfolding in his 1962 book Wildlife Sketches Near and Far:

That night was the most horrible that any member of the M.L. [marine launch] crews ever experienced. The crocodiles, alerted by the din of warfare and the smell of blood, gathered among the mangroves, lying with their eyes above water, watchfully alert for their next meal. With the ebb of the tide, the crocodiles moved in on the dead, wounded, and uninjured men who had become mired in the mud.

The scattered rifle shots in the pitch black swamp punctured by the screams of wounded men crushed in the jaws of huge reptiles, and the blurred worrying sound of spinning crocodiles made a cacophony of hell that has rarely been duplicated on earth. At dawn the vultures arrived to clean up what the crocodiles had left…Of about 1,000 Japanese soldiers that entered the swamps of Ramree, only about 20 were found alive. 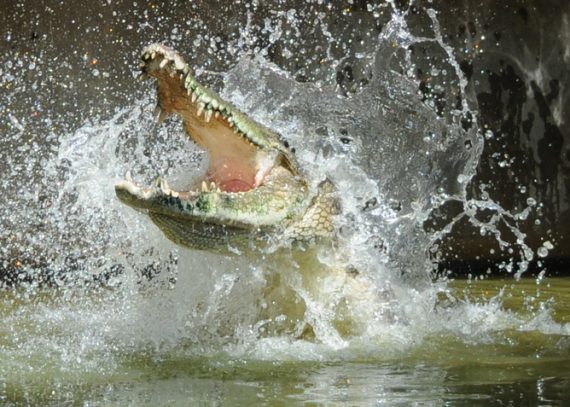 Of the nearly 1,000 Japanese troops that had entered the swamp, it was said that only 20 harried survivors crawled out alive, some of them badly injured and mauled, although this figure has been sometimes disputed and estimates of just how many soldiers died within the swamp vary. It is also uncertain just how many of the doomed soldiers met their demise in the gaping, fanged maws of crocodiles rather than the myriad other dangers lurking in the swamp. Regardless of what the numbers are, the incident was impressive and horrifying enough for the Guinness Book of World Records to crown it with the distinction of being the "Most Number of Fatalities in a Crocodile Attack."

The remarkably violent and ominous incident at Ramree Island has earned it an almost legendary status right alongside similar stories from WWII such as mass shark attacks on the shipwrecked crew of the USS Indianapolis (CA-35), which holds the distinction of being the largest amount of shark attacks on humans in history. Ramree Island still continues to instill a sense of fear even all of these years later. For now, the island is quiet. The crocodiles are still there, and perhaps so are the ravaged ghosts of the fallen soldiers that met their bloody doom there all of those years ago.

Your Belly is Crawling with Undiscovered Viruses