The Mystical Forbidden Mountain of the Himalayas

As human civilization advances and our technology progresses, the world is in a sense becoming smaller and smaller. We have poked prodded at, explored, and conquered so much of our planet that there seems to be nowhere humanity has not touched, nowhere that has managed to stay hidden from our gaze. Besides perhaps the deep seas, there is the feeling that few uncharted frontiers remain concealed from us or unconquered by us. It sometimes seems we live in a world where whatever mysteries have long gestated in the remote places of the world have already been brought out for all to see, that the darkest corners of the world have already been illuminated, and that such mysteries have faded from our planet over time as we push ever deeper into the wilderness.

However, even as human progress and exploration inexorably scratches and pounds at the fringes of our world and understanding, there are still some places in the world that have remained mostly untouched and undefeated by man. One such place lies high in the cold remoteness of the Himalayan mountains. In this place of desolate, bitter cold, unforgiving biting winds, and jagged peaks looms a virtually unexplored mountain steeped in myth and magic known as Gangkhar Puensum, located in Bhutan near the border with China. It may seem surprising that despite the fact that humankind had already summited the 20 highest peaks in the world by 1975, Gangkhar Puensum remains even in modern times untouched, unmounted, and indeed at an elevation of 7,570 metres (24,836 ft) the highest unclimbed mountain in the world.

Gangkhar Puensum has always been somewhat of an enigma, and has presented numerous challenges to those who would climb it. When the elevation of the mountain was first measured in 1922, the maps of the region were shockingly inaccurate. For years, different maps would show the mountain as varying heights and even place it in entirely different locations. It was hard for people to even locate Gankhar Puensum let alone climb it, and some of the first expeditions to the mountain were unable to even find it at all. In addition, there are disputes even to this day over which country the mountain lies in, with Bhutan claiming the entirety of it and China claiming a border that cuts through its northern half.

Until 1983, mountaineering was not even permitted in Bhutan since the country sought to preserve the pristine condition and spiritual importance of its sacred peaks. Local mythology gives further reason for the traditional closure of the mountains, as they were said to be the haunts of various spirits of myth and legend. When Bhutan finally opened its doors to mountaineering as a commercial pursuit for the purpose of tourism, many mountain climbers immediately set their sights on Gangkhar Puensum, the country's highest mountain and therefore the one with the most prestige waiting for those who could fight their way to the top.

In the ensuing years, 4 expeditions would be mounted to try and reach Gangkhar Puensum's summit, a goal that would ultimately remain elusive. None of the expeditions managed to accomplish the feat, either due to being poorly equipped or by suddenly encountering impassable terrain and even freak weather changes as if the mountain itself did not want to be climbed. Local villagers have always maintained that it was the spirits inhabiting the mountain that kept the climbers from their goal. All of these expeditions went home in failure, and conquering the elusive summit of Gangkhar Puensum became almost a mythical quest among climbers in the mountaineering community. They would never have the chance. Although further expeditions were in the pipeline, as suddenly as Bhutan's peaks had been opened, they were closed again. Bhutan's government finally caved into pressure from locals who were unhappy that the mountains, long thought to be the domain of ancient spirits, had been opened to outsiders. In response to the outcry, Bhutan ended up prohibiting the climbing of mountains higher than 6,000 meters in 1994, thereby ensuring that the spirits remained at peace and that the towering, unclimbed Gangkhar Puensum would remain that way forever.

The closing of Bhutan's peaks and stories of ghosts and failure did not discourage everyone. In 1998, a well-funded Japanese expedition made an attempt to scale the mountain by exploiting what they saw as a loophole. They surmised that although Gangkhar Puensum was closed from the Bhutan side, they could simply climb it from China, who claimed a border cutting through the mountain. They subsequently obtained permission from the Chinese Mountaineering Association and it seemed everything was in order for the well-equipped team. However, it was not meant to be, and Gangkhar Puensum would prove to defeat yet another team. Bhutan, who had always claimed sole ownership of the mountain, was less than thrilled with the Japanese expedition's antics and the border dispute caused China to withdraw its permission and thus block the Japanese team's bid to climb it. Gangkhar Puensum would remain unclaimed by man. 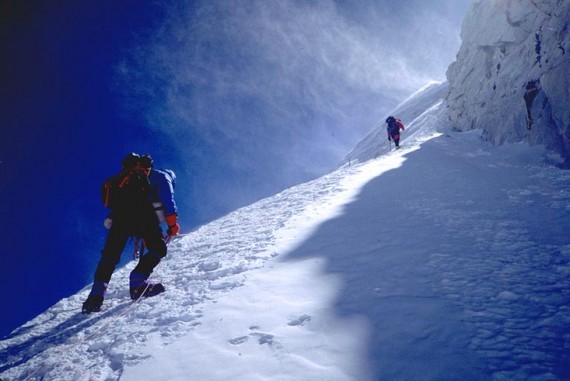 Humbled but not defeated, the Japanese team settled on being the first to climb a subsidiary peak of Gangkhar Puensum called Liankang Kangri, at an elevation of 7, 535 m (24,413 ft). Notes taken by the team during their ascent suggested that with their expertise and high tech equipment, they could have technically made it to the top of Gangkhar Puensum, but no one knows for sure if they would have been successful, or joined prior expeditions in being thwarted by the mountain. Would they have been the first to climb this mystical mountain? Can anybody do it? Is this craggy peak at the remotest end of the earth truly guarded by spirits and phantoms that oppose and ultimately undo all attempts by outsiders who dare to climb it? The fact is that it is quite likely that no one ever will know the answer to these questions.

Gangkhar Puensum is truly a place full of wonder and mystery. Yeti, ghostly apparitions, strange lights, magnetic anomalies, and unexplained disappearances have all been reported from here. What secrets does this insurmountable, forbidden peak hold? For the time being, it appears that no one will ever know, and that this towering giant will remain one of the last great untouched frontiers of the world for quite some time.

The Sad Truth Behind Paranormal Investigation