These days, the splendors of the Mystic East are just a short flight away from the dark and rainy British Isles. If you prefer to stay at home, you can access the secrets of ancient civilizations any time you like thanks to the World Wide Web. That wasn’t always the case, of course. Back in the 19th century, the British poet Rudyard Kipling wrote “East is East and West is West, and never the twain shall meet” – and that was pretty much the situation, as far as cultural interaction was concerned, for thousands of years.

Or was it? Plenty of people over the years have suggested just the opposite. Connections have been proposed between Ancient Britain and almost any other civilization you care to think of, from ancient Greece to the Middle East of Biblical times... and even that most mysterious and mystical place of all, India.

According to legend, Britain was founded by Brutus of Troy, the grandson of the great Trojan hero Aeneas. The city of Troy was located in what is now modern-day Turkey, and Aeneas is supposed to have fought in the Trojan War more than ten millennia ago. The earliest known mention of the Brutus legend is in a book by Nennius called Historia Brittonum, written in the 9th century A.D. A more detailed account can be found in Geoffrey of Monmouth’s History of the Kings of Britain, dating from the 12th century. According to this, Brutus first stepped ashore at Totnes in Devon, at a spot marked to this day by the “Brutus Stone”. 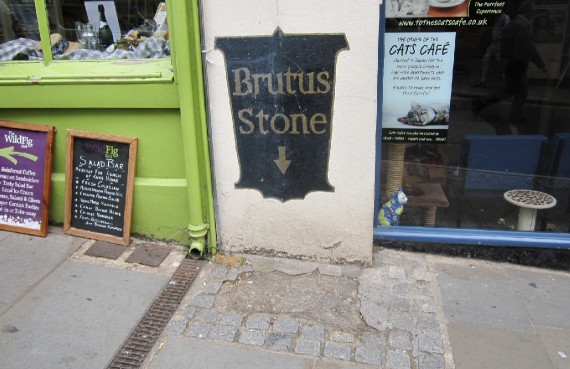 Since Geoffrey of Monmouth’s time, there have been countless other theories linking Britain to other ancient civilizations. In 1644, the English poet John Milton – in a non-poetical work entitled Areopagitica – wrote that “even the school of Pythagoras and the Persian wisdom took beginning from the old philosophy of this island.” Pythagoras, who lived in the 6th century BC, was one of the greatest of the ancient Greek philosophers, while Persia is the old name for the country now known as Iran.

During the 18th and 19th centuries, a fairly popular fringe theory emerged called “British Israelism”. According to this, the inhabitants of Britain are the direct descendants of people mentioned in the ancient Hebrew scriptures, which Christians refer to as the “Old Testament”. In one version of the theory, the British are descended from the northern Hebrew tribes, who disappeared from the Biblical narrative after they were conquered by the Assyrian Empire. In another version, the British royal family – through its Scots and Irish antecedents – is ultimately descended from the Judean lineage that started with King David.

To avoid confusion, I should make it clear that I’m simply describing these theories, not endorsing them. Most of them strike me as little more than wishful thinking – often of a highly imaginative kind. In the 1970s, for example, Mary Caine developed the theory that the county of Somerset – where I live, as it happens – derives its name from the ancient nation of Sumeria. That was one of the very first civilizations on the planet, originating more than 7000 years ago in what is now Iraq.

The prize for the wackiest theory I’ve come across has to go to Basil Stewart, who formulated a novel explanation of Egypt’s Great Pyramid in the 1920s and 30s. According to him, the pyramid was built by ancient Britons, using measurements that only make sense when expressed in terms of British inches. The whole structure is a coded message aimed at the inhabitants of Britain in the early 20th century: “The Great Pyramid was built under Divine inspiration with the purpose of transmitting a message to the present age and particularly to the British race.”

The role of the British in constructing the Great Pyramid is dubious, to say the least. On the other hand, the ancient Britons really did build Stonehenge... or did they? The 19th century esotericist Hargrave Jennings begged to differ. He wrote that “the temples erected at Stonehenge and other places were of a Phoenician origin.” Phoenicia was an ancient middle-eastern civilization centered around what is now Syria and Lebanon. Jennings goes on to hint at a kind of ancient world-wide web:

It seems evident that Stonehenge and all the monuments of the same kind found in the north, belong to the same religion which appears at some remote period to have prevailed over the whole northern hemisphere.

A completely different theory of Stonehenge was put forward by Sir William Jones in the 18th century. Jones was fascinated by the way Buddhist iconography can be found all over the continent of Asia, and he speculated that the Buddha – or Boodh, to use the spelling of the time – was originally venerated in Europe as well:

The religion spread probably over the whole Earth; there are signs of it in every northern country, and in almost every system of worship. In England it is obvious: Stonehenge is evidently one of the temples of Boodh.

Other people besides Sir William Jones have theorized that Buddhism was once the religion of the British Isles. A book entitled Buddhism in pre-Christian Britain was written by Donald A. Mackenzie in 1928. It quotes Origen, a Christian writer of the third century A.D., as having said: “The island has long been predisposed to it (Christianity) through the doctrines of the Druids and the Buddhists, who had already inculcated the doctrine of the unity of the Godhead.”

According to Mackenzie, Buddhism arrived in Britain in the third century B.C. through the missionary work of Ashoka the Great, India’s first Buddhist Emperor. Another Indian connection with ancient Britain was hinted at by archeologist Sir William Flinders Petrie. In an academic paper on “The Hill Figures of England” in 1926, he proposed a novel interpretation of the giant chalk figure in East Sussex known as the Long Man of Wilmington. According to Petrie, this may be a representation of Varuna, an ancient Hindu deity:

Varuna might be the origin of the Wilmington figure, which has already been supposed to be opening the gates of heaven; it looks to the north, the region of Varuna; the figure was in shadow at sunrise and setting during ten months of the year, and Varuna was the god of the ten months of gestation.