A 1972 movie that starred horror favorites, Christopher Lee and Peter Cushing, as well as Telly Savalas of Kojak fame, Horror Express is a decidedly unusual production. What starts out as a regular movie of the monster kind quickly mutates into a story involving mysterious deaths; the preserved body of an ancient, Bigfoot-like humanoid, a disembodied alien, and finally, zombies.

Handled properly, a movie featuring such a wide and varied body of themes might work. Unfortunately, Horror Express is not quite the creature-feature it could have been. That’s not to say it’s awful, but it’s certainly not great either. Rather, it languishes in some middle realm of a less than satisfying kind.

The film is set just a few years after the turn of the 20th Century when one Professor Alexander Saxton – portrayed by Christopher Lee – is bound for England, after completing an archaeological expedition on the Russia-China border.

In a previously unexplored cave, Saxton and his team stumble on the well preserved (in fact, the very well preserved) remains of an ancient, human-like creature that resembles a cross between a Neanderthal man and a Bigfoot. Or, perhaps, the “missing link” might be more appropriate terminology to use.

Excited by the nature of the groundbreaking find, Saxton wastes no time in securing the utterly frozen monster and loading it aboard a train – the Trans-Siberian Express, which travels from Moscow to Vladivostok. Unfortunately, for those aboard the train, the monster doesn’t remain dormant for long. In quick fashion, the beast escapes from the confines of its crate, and the train is tormented by a series of mysterious murders.

All the victims display the very same characteristics; their eyes are rendered totally white and their eye-sockets are soaked in blood. A member of the church traveling on the train – Father Pujardov, who was clearly modeled on the famous, Russian “mad monk” Rasputin – asserts that there is downright evil aboard. He is not wrong. 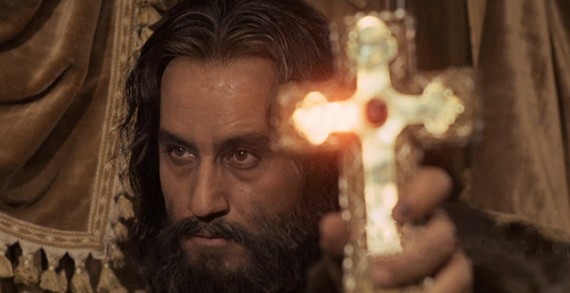 As the hours tick by, the body-count increases. Incredibly, although it soon becomes clear that the ape-man is the culprit, after it is killed the grisly deaths continue. Saxton and Peter Cushing’s character – a Dr. Wells – come to a startling conclusion.

The Yeti-like animal was not the actual cause of the killings. Rather, the real killer is a disembodied, spirit-based, extraterrestrial creature that has the ability to jump from host to host. And, with the ancient ape now dead, the race is on to find in whose body the alien is now hiding.

That’s when a platoon of the military becomes involved; led by Savalas’ crazed Captain Kazan, they board the Express and prove to be just about as deadly as the body-jumping extraterrestrial. The creature’s ethereal form first secretly takes over Father Pujardov and, after he is shot and killed, enslaves the mind of a police officer, Inspector Mirov.

At this point, an all-out gunfight begins, as Kazan and his Cossacks do their very best to wipe out the alien, once and for all. Unfortunately, the exact opposite happens. The creature, which is easily able to outwit the troops, slaughters them, as well as even more passengers. 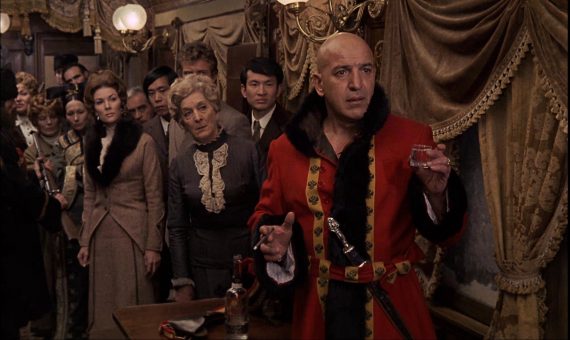 The monster-from-the-stars then unleashes its most deadly weapon of all upon Wells, Saxton and the dwindling number of survivors; it resurrects the recently dead and turns them into mind-controlled, killer-corpses that stagger – Romero-style – around the darkened corridors of the huge train, exterminating anyone and everyone that gets in their way.

The far from friendly E.T. is finally defeated when Wells, Saxton, and those few still left alive, make their way to the furthest carriage of the train and unhook it. A nearby station is alerted to what is afoot and quickly alters the points on the track, which diverts the speeding train onto a disused piece of line that sends the train – and the alien – over a cliff, resulting in an explosive, pummeling finale.

Horror Express is worth a watch, but it’s no Night of the Living Dead. In fact, with so many threads and themes running through the story, it’s difficult to say what it is.

The Bizarre Beast of Bandai