Tales of the Shape-Shifting Dead

Up until the end of season four of The Walking Dead, we were familiar with seeing our straggling bunch of heroes hunkered down in a fortified Georgia prison, doing battle with both the dead and their arch-villain, the Governor. But the resurrected dead, people feeding on people, and prisons also have a place in the real world.

In the latter part of the 16th Century, London, England'’s Newgate Prison was the site of a horrific series of deaths that would have made even the average walker proud in the extreme – if such creatures possess significant amounts of brains to be proud.

Due to a pronounced lack of regular food, on more than a few occasions the prisoners targeted the weakest members of the pack and turned them into food. It was very much a case of having to eat the living to avoid becoming one of the dead. We are, then, talking about cannibals in the cell-block.

One of those savagely killed and partially eaten by the prisoners was an unnamed man who did exactly what the bitten and the equally semi-devoured of the prison of The Walking Dead did on so many occasions: he rose again. Not, however, as a voracious devotee of raw, human flesh, but as a ghastly and ghostly black dog with a pair of blazing red eyes.

The actions of this undead man-hound were not at all unlike those of its television-based equivalents. The creature violently slaughtered all of those that had taken its human life by savagely biting down on their necks with its immense and powerful jaws.

Death swiftly followed for the guilty parties. Reanimation, however, did not. When the deed was done, the man – in spectral dog form – vanished, never, ever to be seen again.

Then there is the very similar, and very weird, tale of a pair of brothers: William and David Sutor.

The dark saga all began late one night in December 1728, when William, a Scottish farmer, was hard at work in his fields and heard an unearthly shriek that was accompanied by a brief glimpse of a large, dark-colored dog, far bigger than any normal hound, and one possessed of a pair of glowing red eyes - just like the beast from Newgate Prison. 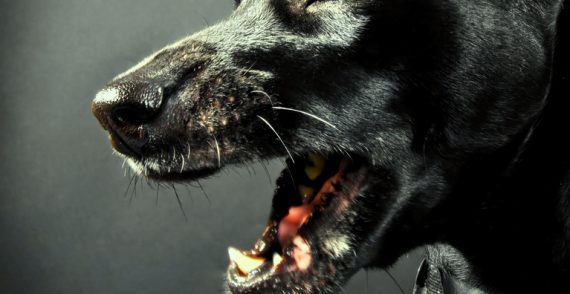 On several more occasions in both 1729 and 1730, the dog returned, always seemingly intent on plaguing the Sutor family. It was, however, in late November of 1730 that the affair ultimately reached its paranormal pinnacle.

Once again the mysterious dog manifested before the farmer, but this time, incredibly, it was supposedly heard to speak, in rumbling tones, and directed William to make his way to a specific, nearby piece of ground within thirty minutes.

He did as he was told, and there waiting for him was the spectral hound of Hell. A terrified William pleaded to know what was going on. The hideous hound answered that he was none other than David Sutor – William’s brother - and that he had killed a man at that very spot some thirty-five years earlier.

As David had directed his own savage dog to kill the man, David had himself – as punishment – been returned to our plane of existence in the form of a gigantic hound. The dogman instructed William to seek out the buried bones of the murder victim, and then place them within consecrated ground, which William duly did, in the confines of the old Blair Churchyard.

The ghostly black dog – the spirit of David Sutor in animal form – vanished. Like the beast of Newgate Prison, when its work was done, it never made a re-appearance.

The Invaders: Ahead Of Its Time