The Bizarre Beast of Bandai

Some strange mysteries are hard to really categorize. There are cases of mysterious creatures or apparitions where it is difficult to discern if you are looking at a mystery animal, a ghost, a phantom, an alien, or all of the above. Certainly counted among these is the curious case of a quiet mountain hamlet on Japan's Mt. Bandai that was held in the grip of terror by a shadowy, evil, entity that to this day remains unidentified.

The residents of Mt. Bandai, an active stratovolcano located in the Tohoku area of Fukushima prefecture, Japan, are no strangers to disaster and terror. The mountain is most notable for its eruption in 1888, which killed 477 people, left thousands more homeless, and remains one of the worst volcanic disasters in recent Japanese history. Long before this tragedy, in the late 1700s, a lesser known but nevertheless frightening incident occurred when a small village at the foot of Mt. Bandai was besieged by a mysterious and deadly creature that suddenly and inexplicably appeared at their doorstep to wreak havoc.

The incident began when villagers started reporting sightings of a strange creature lurking in wilderness along the fringes of town. This creature was said to look like a large primate of some sort, with a huge mouth, claws, and spiky fur running along its back. It was most often fleetingly glimpsed in the evening or twilight hours and its eyes were said to glow or reflect light like a cat’s. The beast was said to furtively stalk around the edges of town and seemed to shun light. Villagers described how the thing would sit in pools of shadow just outside of the radius of a light source and glower from the darkness with its flickering, shining eyes. Despite its menacing appearance, at first the creature was easily frightened, and would dart away into the underbrush from sudden light, shouting, or loud noise, but it became increasingly bolder and more frequently spotted as the days went by. 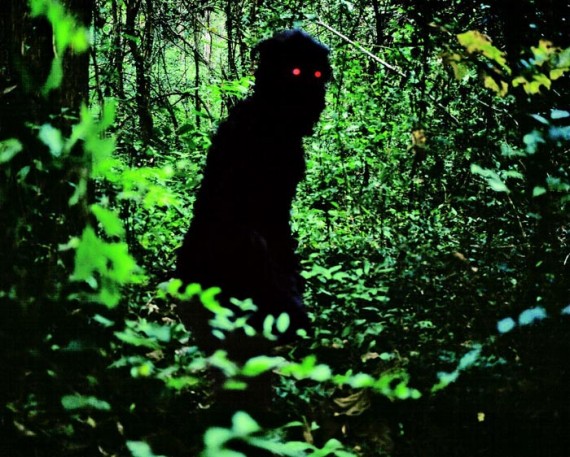 The strange monster was not only seen, but also heard. Loud, guttural, and clearly inhuman shrieks and howls were often heard at night emanating from somewhere on the dark mountain looming above. At times the this eerie nighttime howling would last throughout the night, keeping the villagers awake in the grip of terror. The unnatural shrieks, howls, and sightings of such a sinister creature would have likely been enough to instill fear within such a small and remote rural community, but this was to be just the beginning of the village's nightmare.

The creature become ever bolder and more aggressive as the days went by. Where at first it would retreat from noise or light, it started to display more menacing behavior such as growling at eyewitnesses. Villagers also reported being followed by the thing, which made less and less effort to conceal itself as it stalked them along darkened paths. The village placed guards with torches around the outskirts of town in an effort to drive away the creature or at least discourage it from coming nearer, but it was was not intimidated. The plan did nothing to dissuade it and perhaps even angered it. Several night watchmen described being rushed from the darkness by the creature, and retreating from their positions in terror.

At around this time, animals such as pets and livestock were reported to have disappeared without a trace. One farmer was said to have had every single one of his chickens disappear in a single night with only some scattered feathers left behind. The animal disappearances continued at an increasing rate, and it did not take long for villagers to connect these vanishings with the odd visitor lurking in the woods. It was a realization that was confirmed when a farmer claimed to have spotted the mysterious creature killing a dog in a field. According to the man's account, the thing had already slain the animal and was in the process of disemboweling it when it was spotted and subsequently dragged its mutilated prey into the trees.

People became wary of traveling outside during twilight hours and at night, yet even staying in their homes was no guarantee of peace. The creature was often reported circling homes and its deep, gruff breathing was frequently heard right outside of dwellings. Occasionally it would rap, scratch at, or even pound on doors, windows, and walls almost as if it were testing the structure for ways to enter as the terrified occupants cowered in their homes. It was also not uncommon for people to hear the thumping of its heavy footsteps across their roofs. One particularly harrowing account comes from a family of farmers on the very outskirts of town, who had their home actively attacked by the rampaging beast. In this case, the creature was said to have charged the doors full force while roaring in rage, and the doors rattled in their frames, threatening to cave in. The furious monster also was reported as hurling large stones at the dwelling. When it failed to gain entry, the beast slunk back off into the woods, leaving the house badly damaged and the petrified occupants no doubt scarred for life.

This still would not be the extent of the bizarre occurrences unfolding around the village. As time went on, several children disappeared, with some reportedly taken directly from their own homes. The creature was even purportedly seen kidnapping children and dragging them screaming into the night as helpless villagers looked on in horror. Attacks on adults began to occur as well, and although the creature was not successful in killing any of them, some villagers were bitten, mauled, or at the very least left badly shaken. One village man described how the creature came so close to him during an attack that he could smell its breath, which was described as smelling of rotten eggs and fish. He was only able to escape after allegedly poking the thing in its eyes.

It was at this time that the villagers took more decisive action, and hired a well-known hunter to track and kill the beast that was terrorizing them. The hunter bravely trekked out into the surrounding wilderness in an effort to both kill the thing and draw it away from the village. During the hunt, the hunter described how the creature stalked him and circled his camp menacingly on several occasions. After a few days of tracking the creature, the hunter allegedly finally managed to shoot and kill it in 1782 after it tried to rush from the forest and attack him. It was reported to be so fierce that the bullet did not bring it down and the hunter had had to resort to repeatedly stabbing the thrashing beast with a knife to kill it. The hunter then dragged the body back to the village to display to the shocked villagers. The carcass was purportedly a somewhat ape-like creature that was 1.5 meters tall, covered in hair, and with a large mouth filled with fangs that was so oversized that it was described as being as if the head was split from ear to ear. Along its back were spines reminiscent of those of a porcupine. The creature also had a long, sharp nose and short limbs with webbed hands that ended in wicked claws. The carcass was reported to exude an extremely rank, overpowering odor, which unfortunately led to the body being discarded not long after. With the death of this baffling monster, the sightings, attacks, kidnappings and animal disappearances all ceased.

This case has always fascinated me and remains one of the weirder ones I have come across. What is going on here? The creature matches no description of any Japanese cryptid that I know of seen before or since these events. With the descriptions from eyewitness accounts as well as those given by the hunter and indeed a body allegedly provided, there seems to be little chance that it was a more mundane animal that was simply misidentified. There is nothing living in the Japanese wilderness really anywhere close to what this thing is said to look like. In addition, the sightings and disappearances started abruptly, with no apparent prior history of such a creature ever being seen on the mountain, and ended just as abruptly with its reported death, suggesting just a single creature at work. Whatever it was also seemed to have targeted just one village, and to top it off nothing like it has been reported from the area since. The case remains a complete, head scratching mystery.

What terrorized this small rural mountain community? Was this an unknown creature of some kind? If so, what was it and where did it come from? Was it just a crazed bear or some other wild animal that was misidentified by many witnesses and an experienced hunter that was somehow blown out of proportion into something else? Was there mass hysteria of some kind at work? No one has the faintest idea. Unfortunately, considering that these events unfolded way back in the late 1700s and that the alleged carcass of the creature was not preserved or examined by any sort of scientist, it seems that the mysterious Beast of Bandai will forever remain an enigma.

What Caused This Crater in a Utah Pond?