Seventy years ago, on 8 September 1944, a gas main exploded in London. Well, that’s what the newspapers said the next day, but can you believe everything you read in the press? Not many Londoners did. For one thing, it wasn’t an isolated incident. The papers went on to report a whole series of “gas main explosions” – dozens of them – over the course of the next two months.

What was causing the sudden spate of explosions? Britain had been at war for five years, but there were no longer any German bombers in the skies over London – the Royal Air Force had total air supremacy. A few months earlier the city had suffered a flurry of “flying-bomb” attacks – essentially small unmanned kamikaze aircraft – but these had stopped when the French coast was controlled by the advancing Allies.

The war was coming to an end, and the British government wanted to get that message across to the public. Newspapers only printed good news. London life was returning to normal; blackout restrictions had been lifted and evacuees were being told to return to the city. Two or three “gas main explosions” per day was no cause for alarm.

Few people believed the “exploding gas main” stories. The British often boast about their wartime spirit – whereby everyone feels they are on the same side against a common enemy – but for Londoners in September 1944 the wartime spirit became distinctly frayed. It was replaced by something far more cynical and familiar – a conspiracy theory. The government knew perfectly well what was causing all these explosions, and so did anyone who had seen the aftermath of one.

In the bottom of each smoking crater was the tangled wreckage of a rocket. 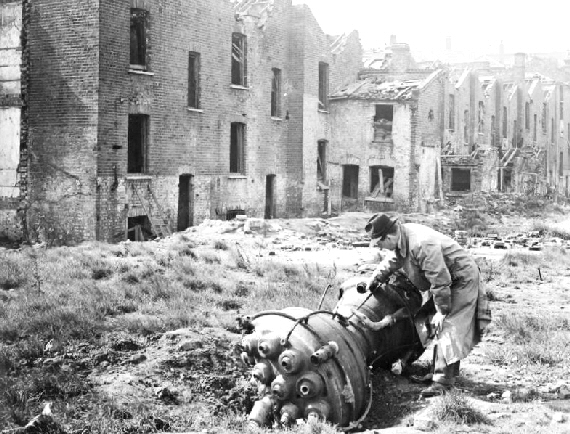 The first V-2 rocket landed in London on 8 September 1944, a few hours after a similar weapon had been fired at Paris. In the course of the next six months, some 3,170 V-2s were launched from sites in German-held territory. Almost half of them were targeted at London, with the remainder aimed at allied targets on the continent. The V-2 caused far more fatalities than a similar tonnage of conventional bombs, partly because of its enormous kinetic energy and partly because it struck without any warning. Falling from the edge of space at several times the speed of sound, the first thing anyone on the ground heard was the warhead exploding. This was followed by the long drawn-out rumble of the rocket falling through the air, long after it had already hit the ground.

Londoners knew they were being attacked by long-range rockets, and they resented the way the government persistently denied the truth. The ridiculous notion that the city was suffering from a sudden epidemic of spontaneously exploding gas mains was an insult to the public’s intelligence.

As is so often the case with “disinformation”, the government’s excuse – when it finally came out – was that the deception was aimed not at the general public but at the enemy. As Prime Minister Winston Churchill said on 10 November 1944, in the government’s first public acknowledgement of the rocket attacks:

No official statement about the attack has hitherto been issued because it might have given information useful to the enemy, who may well have been uncertain as to whether any of these missiles had actually struck this island. No doubt by now he has acquired some information, and in any case the Government do not feel they should any longer withhold all information from the public.

There’s an obvious analogy here with the official attitude toward UFOs – with the difference that everyone today knows that the V-2 rockets were real. They weren’t exploding gas mains. As far as the authorities are concerned, though, UFOs are still weather balloons, swamp gas, the planet Venus, etc.

To British scientists, the idea of a powerful liquid-fuelled rocket was the stuff of science fiction and nothing more. To produce the required thrust from the available volume of fuel, enormous pressures would be needed – far more than could be contained by any conceivable fuel tank. If the Germans claimed they were developing liquid-fuelled rockets, then it must be a bluff that could safely be ignored. If intelligence operatives claimed to have seen rocket production facilities, they must have been mistaken. You can’t argue with the laws of physics.

The scientists were right to some extent. It’s true that you can’t break the laws of physics, and that a rocket exhaust requires an enormous pressure. But who said the fuel had to be stored at that pressure? The Germans used a turbopump, similar to a car’s turbocharger, to vastly increase the pressure at the nozzle of the rocket. The laws of physics were right – it was just the British scientists, who couldn’t think “out of the box”, who were wrong.

The German V-2 campaign saw long-range rockets used as weapons of war for the first time in history, and it all started seventy years ago this month. If you’d like to know more about the subject, you might want to take a look at my ebook The V-2 Offensive On London. 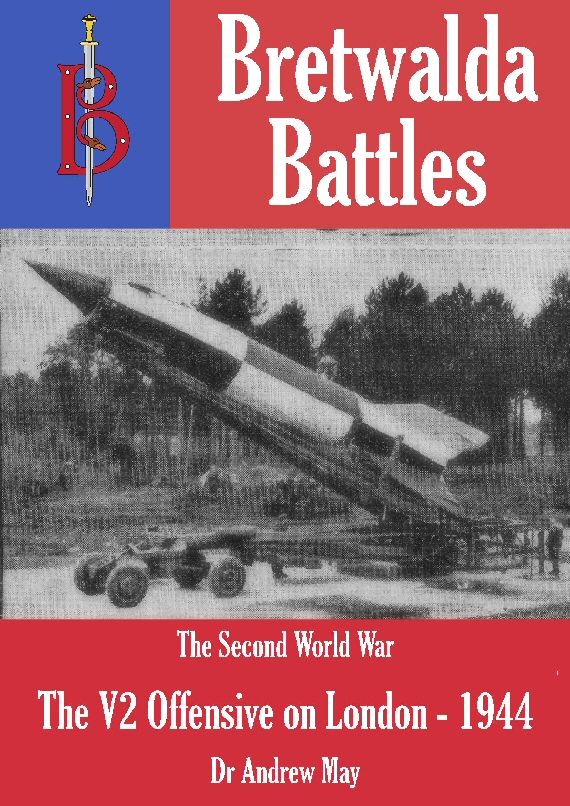